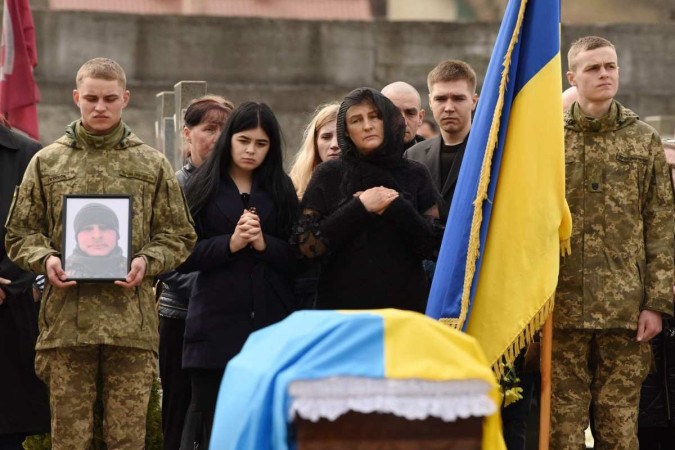 The 53rd day of the war in Ukraine began with an ultimatum from Russia for the Ukrainian forces still holding out in Mariupol to surrender. The deadline, however, was ignored by the fighters and the Ukrainian prime minister assured that there will be no surrenders. At the same time, Russia again attacked the capital Kiev and surrounding cities, in a pledge made after the loss of its flagship in the Black Sea.

Russia remains on track to fully conquer Mariupol in what would be the first major Russian success in a war fraught with setbacks. Capturing the city would free up Russian forces to weaken and encircle Ukrainian forces in the east, where Russia has focused its war objectives for the time being and is sending personnel and equipment pulled from the north after a failed attempt to take Kiev.


Meanwhile, several questions remain unanswered about what happened to the mighty Russian warship, Moskva, and its crew of more than 500 people, which sank last Thursday, the 14th. Even with the Russian press buying the state version that the cruise ship sank after a fire – against the Ukrainian and US version that Neptune missiles were the cause – a popular pro-Kremlin television presenter raised the question: “what went wrong?”

Ukrainian soldiers defied a Russian ultimatum to lay down their weapons by Sunday at the besieged port of Mariupol, a city Russia says it has almost completely seized in what would be its biggest achievement in Ukraine’s nearly two-month war.

Russia has given a deadline for Ukrainians besieged at the Azovstal steelworks to surrender by 6:00 am local time (0000 GMT) and leave the building by 13:00 (07:00 GMT). But the deadline passed without there being any signs of surrender from the fighters. In an interview with US media, Ukraine’s Prime Minister Denis Shmigal said that Ukrainian forces in Mariupol will fight “until the end”.

The Russian military estimated that some 2,500 Ukrainian fighters are holding out at the massive steel plant, which has a labyrinth of underground passages and provided the last pocket of resistance in Mariupol.

Ukrainian Foreign Minister Dmitry Kuleba as well as President Volodmyr Zelensky warned that the situation in Mariupol would be the “red line” for further negotiations with Russia.

Bombing in Kiev and Kharkiv

Following a Russian pledge to resume bombing the Ukrainian capital following the withdrawal of its forces, Russian forces carried out new missile strikes on Sunday near Kiev and elsewhere in an apparent effort to weaken Ukraine’s military capability ahead of the attack. anticipated in the east.

Kiev Mayor Vitali Klitschko said an attack on Saturday on what the Russian Defense Ministry identified as an armored vehicle factory killed one person and injured several. He advised residents who fled the city at the start of the war not to return.

Like Mariupol, the northeastern city of Kharkiv has been an ongoing target of Russian aggression since the early days of the invasion and saw conditions deteriorate before the offensive in the east.

At least five people were killed by Russian bombing in Kharkiv, Ukraine’s second-largest city, regional officials said. The dam hit apartment buildings and left streets littered with shards of glass and other debris, including part of at least one rocket.

Russia also said its forces shot down two Ukrainian MiG-29 fighter jets in the Kharkiv region and destroyed two Ukrainian command posts and a radar system for S-300 surface-to-air missiles in the town of Avdiivka, north of the city of Donetsk. Ukrainian authorities did not immediately confirm the alleged losses.

In his biannual “Urbi et Orbi” (To the City and the World) Address to some 50,000 people in St Peter’s Square at the Vatican, Pope Francis urged leaders to heed the people’s call for peace in Ukraine and implicitly criticized Russia for dragging the country into a “cruel and senseless” conflict.

Francis devoted much of his speech, traditionally an overview of world conflicts, to Ukraine, comparing the shock of another war in Europe to the shock of the apostles who the gospel says saw Jesus resurrected.

“Our eyes are also in disbelief this Easter of war. We saw a lot of blood, a lot of violence. Our hearts were also filled with fear and anguish, like many of our brothers and sisters who had to lock themselves up to be safe from bombings”, he recalled. .

It was the first Easter since 2019 that the public was allowed to participate after two years of restrictions imposed by Covid-19. (With international agencies)

Food maven. Unapologetic travel fanatic. MCU's fan. Infuriatingly humble creator. Award-winning pop culture ninja.
Previous Capital with the most dengue cases in the country, Goiânia declares public health emergency | Goiás
Next Use of vaccines and medicines will be affected by the end of emergency against Covid; Anvisa evaluates deadlines | coronavirus