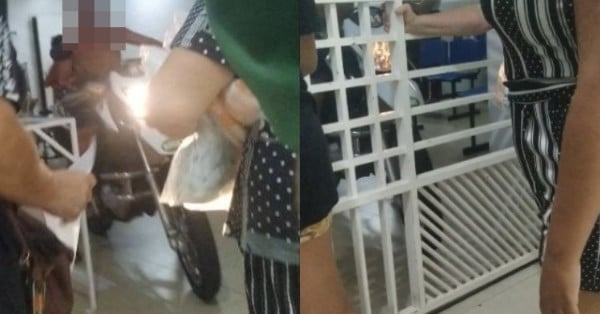 Woman invades emergency room with motorcycle after delay in care

A woman riding a motorcycle, invaded the emergency room Municipal Dr. João Siqueira, located in the municipality of Piracuruca, North of Piauí. The incident was recorded on Sunday night (17). According to information from the Military Police, the woman said that she was irritated by the delay in caring for a patient that she followed.

In the video circulating on social media, it is possible to observe the moment when the woman enters the health unit driving the motorcycle and honking. Then another person closes the grid, preventing progress.

The Piracuruca Health Department informed, through a note, that the fact occurred after a patient was admitted to the. While the form was being filled out, the woman who was driving the motorcycle invaded the health unit.

“The young lady, supposedly her friend, very nervous, started screaming and uttering profanity, invading the premises of that health post, with her motorcycle, honking and causing a riot, exposing to danger not only herself, but the all patients and servers who were on site.”, says the note.

The Health Department also reported that “military police attended the scene, taking her out of the health post’s premises. The patient continued to be attended to, and these were the facts that occurred that night”.

Corporal Martins, from the Piracuruca Military Policeinformed the meionorte.com that the PM was called and upon arriving at the scene found the veracity of the information.

“She claimed that she ended up getting annoyed by the delay in attending a companion. We did the necessary procedures, removed the woman from the scene and drove her to the police station with the vehicle,” she said.

The Municipal Health Department of Piracuruca comes to the public to clarify the facts that occurred at the Municipal Emergency Room, on the night of April 17, 2022. by physicians on duty Dr. Cesar Melo and Dr. Antônia Bonfim, respecting the order of arrival of the patients, the protocols and the severity of the care, a patient arrived accompanied by her mother-in-law. At the moment when she was being removed from the vehicle that was driving her and her attendance record was provided, a young lady, supposedly her friend, very nervous, started screaming and uttering profanity, invading the premises of that health center, with her motorcycle, honking and causing a ruckus, exposing not only herself, but all the patients and staff who were on site to danger. Even during the care of her friend, performed by Dr. Antônia Bonfim, she continued to riot the premises of the Emergency Room, complaining about the lack of care. The military police attended the scene, leading her out of the health post’s premises. The patient continued to be attended, and these were the facts that occurred that night. These are the clarifications. Direction of the Municipal Emergency Room of Piracuruca.

She's our PC girl, so anything is up to her. She is also responsible for the videos of Play Crazy Game, as well as giving a leg in the news.
Previous New WhatsApp feature hides “last seen”
Next Putin honors military division accused of massacre in Bucha