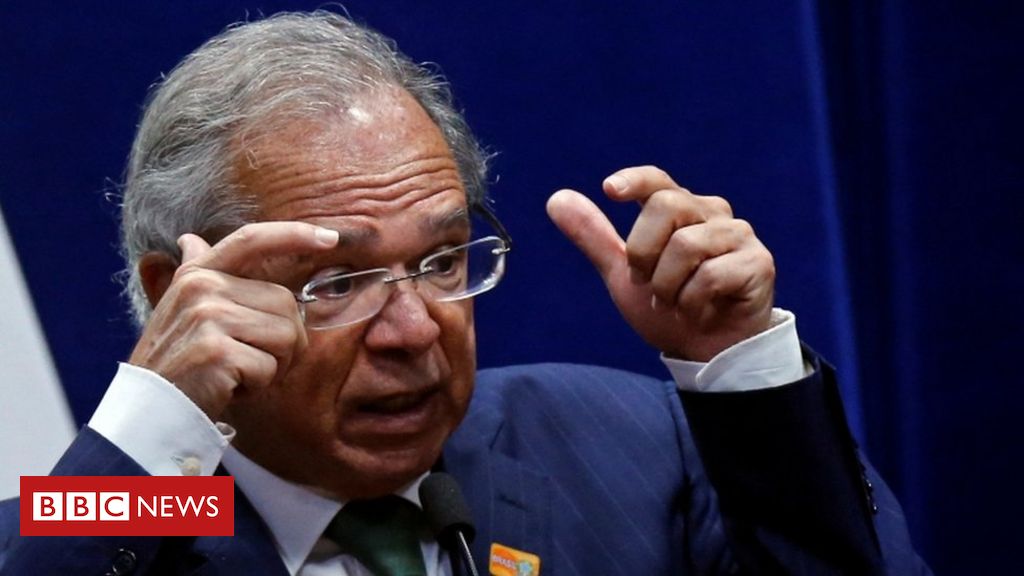 In the US, Guedes says that ‘Brazil is against war and against sanctions’ and that the country ‘belongs to the BRICS, not the OECD’

Abhishek Pratap 4 weeks ago News Comments Off on In the US, Guedes says that ‘Brazil is against war and against sanctions’ and that the country ‘belongs to the BRICS, not the OECD’ 20 Views

Economy Minister Paulo Guedes said that Brazil is against the war in Ukraine, but also against sanctions applied to Russia for invading the neighboring country.

In an interview this Tuesday afternoon (4/19), at the Center of Strategic and International Studies, in Washington DC, Guedes also said that Brazil is against the expulsion of Russia from multilateral institutions such as the World Bank and the International Monetary Fund ( IMF), as the United States and the member countries of the G-7 want.

At the end of February, Russia invaded Ukraine, in a war that has killed thousands and forced some five million Ukrainians to seek refuge outside the conflict zone. Since then, under the leadership of the Americans, part of the rich countries has been pressing for Russia to be withdrawn from international organizations, such as the G-20.

“By the rules, you cannot expel them. Brazil is in favor of the rules. In my personal view, you have to maintain the bridges to convince them to a ceasefire. The question we should ask them (Russians) is: ‘Look, if you don’t want to respect the institutions, if you don’t behave properly, why do you want to stay?'”, said Guedes.

Asked to explain Brazil’s position in relation to the war, Guedes stated that it is a “complex” position, “against the war and against sanctions”. The Brazilian position is considered confusing by the international community.

The country condemned Russian actions at the UN Security Council, but voted against Russia’s expulsion from the UN Human Rights Council. And days before the war, Brazilian President Jair Bolsonaro expressed “solidarity with the Russian people” on a visit to Moscow and later disallowed his deputy, Hamilton Mourão, who had criticized Vladimir Putin’s warlike actions.

Brazil’s position led US President Joe Biden’s spokeswoman, Jen Psaki, to say that the country would need to choose whether to be on the right or wrong side of history, a position that bothered the Itamaraty.

Guedes also stated that the Brazilian Constitution prohibits Brazil from endorsing sanctions not approved by the UN. He called the sanctions “civilized” but said that legally Brazil could not support them.

“Brazil’s Constitution prohibits sanctions, except for those that the UN endorses,” Guedes said. It is not a tradition in Brazilian foreign policy for the country to support unilateral sanctions.

According to Elaini da Silva, professor of international law at PUC, the text of the Constitution provides for multilateral solutions and non-intervention in relation to other countries, and therefore there is an interpretation that unilateral sanctions violate these principles.

‘We do not belong to the OECD’

Asked whether Brazil was facilitating Russia to evade the economic sanctions imposed by the United States and Western Europe, Guedes mentioned BRICS and OECD: “I would not put it in these terms, facilitating… Brazil is governed by a president who received 60 million votes and is thinking about fertilizers, imported from Russia. We don’t belong to the globe, to the OECD. And we belong to the BRICS, we are the only ones in the BRICS to have condemned the invasion. India and China, half of the world’s population, said ‘we don’t we care’. So we are in a complex situation. My position would be: cease fire now and immediate suspension of sanctions”, replied Guedes, who defended during the interview that this was the moment for Brazil to be finally admitted to the Organization for Cooperation and Economic Development (OECD), a flag of the current Brazilian government.

Bolsonaro has already mentioned the importance of fertilizers for agribusiness and Brazil’s economic interests as a reason to take a cautious stance in the face of war.

In a critical tone, regarding Russia’s expulsion from multilateral organizations, interviewer Daniel F. Runde, director of the CSIS Americas program, told Guedes: “You will find that there are very strong views on this here and it will be interesting to see the answer you will get with your position”.

Runde also stated that “in Washington nobody believes their president is going to win re-election”. Always speaking in English, Guedes said that Bolsonaro is acclaimed wherever he goes in Brazil and slipped in the numbers. “He goes everywhere and is greeted by hundreds of millions, escapes security, hugs people,” he says.

Guedes is in Washington for the spring meetings of the IMF and the World Bank. This Tuesday, the IMF released a new growth expectation for the Brazilian economy, with an upward revision, and stated that Brazil should grow 0.8% in 2022.