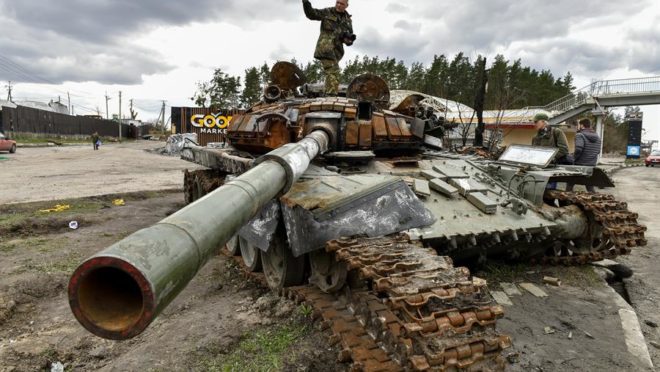 On the verge of a default, is Russia in a position to continue the war in Ukraine?

Abhishek Pratap April 20, 2022 News Comments Off on On the verge of a default, is Russia in a position to continue the war in Ukraine? 18 Views

Ratings agency Moody’s said Russia could be in default after trying to pay in rubles on two of its dollar-denominated bonds due April 4. If the account is not cleared by the end of the grace period on May 4, the country could be declared in default on foreign bonds for the first time since 1918, shortly after the Bolsheviks seized power. .

“Bond contracts are not payable in any currency other than dollars,” Moody’s said in a statement Thursday. With the fourth largest reserve in the world, built by Vladimir Putin precisely for a crisis like the current one, Russia has money, but cannot pay the debt, because its reserves are frozen by the Western powers.

With international sanctions and the prolonging of the war – which is estimated to cost the country more than US$ 20 billion a day, including direct expenditures and losses in economic production – Russia’s financial situation would be able to stop Putin’s onslaught in the country. Ukraine?

International analysts believe that, in the short term, the imminent default would not change the outcome of the war. “Especially if Russia is able to achieve its new, more limited military objectives in the eastern Donbass region quickly,” says The Conversation, based on analysis by political economy and conflict experts Michael Allen and Matthew DiGiuseppe..

For the professor of International Relations at Ibmec SP Alexandre Pires, more than stopping Putin, the strangulation of Russia should generate an intensification in the brutality of the means of war, with more civilian deaths, as a form of “ultimatum” for Ukraine to surrender.

“This third month is probably the most brutal. We have already seen Russia targeting the western part, not because it is rich, because rich is the industrial district on the eastern side that they want to control, but so that the Ukrainians have to leave for a peace negotiation. They will seek to win as soon as possible, and then think about economic normalization”, he bets.

Pires argues that this is possible because Russia has been using old weapons that were stockpiled and, possibly, are out of date. In addition, the country’s self-sufficiency in fuel, an important asset for the war, and in grains, to guarantee the population’s food security, weakens the effects of sanctions a little, in the professor’s opinion.

“We see news of vacuum pumps, of small darts found in some villages, like the ones used by the United States in Vietnam. This is the cruel side of war: dumping old artillery, which would no longer be used. We haven’t seen the Russians lose many new and valuable things like fighter jets. Russia has the military power to destroy Ukraine many times over,” he points out.

Economist and doctor of international relations Igor Lucena agrees that Russian self-sufficiency in weapons and fuel puts it at an advantage, but considers that the country depends on the foreign market for items such as parts for planes, tanks and microchips for missiles.

“Airbus and Boeing, for example, have announced that they will no longer supply aircraft parts to Russian airlines. This impacts aviation within the country. The large amount of assets and products needed complicates the situation not only in war, but in everyday life”, he adds.

With “part of the cost of the war in foreign currency” and Russian reserves blocked abroad, Lucena explains that the country has adopted the strategy of prolonging its financial capacity, maintaining internally the maximum of foreign reserves. Hence the attempt to pay off the foreign debt in rubles.

The specialist recalls that, unlike what happens in Brazil (whose debt is basically 95% in reais), most of the Russian foreign debt has contracts in dollars or euros. “This attempt to unilaterally change the currency of the contract, never seen before, is in practice a default. Russia wants to force creditors to receive rubles, and today there is practically an inconvertibility of the ruble. Nobody wants to receive in that currency and the banks don’t want to accept it anymore”, he reinforces.

In this way, in the economist’s opinion, Russia’s financial situation on the international stage, with the maximum devaluation of the ruble, could force a peace agreement with Ukraine.

The fact is that the longer Ukraine resists, the more financially taxing the war will become for Russia. Faced with the impossibility of obtaining credit in the market, the trend is for Russian weakness, especially with the reduction of European dependence on fuel coming from the country.

“The main economic artillery that could be aimed at Russia is gas from Germany”, defends Alexandre Pires. However, he adds, the West still cannot afford this sanction. “There is no logistics to send American gas to Germany, it would be necessary to build ships for that, which takes time”, he ponders.

Pires recalls that the Ukrainian economy has already suffered a 45% retraction this year and that the Russian economy had a much smaller impact, around 15%. The bill for the war, however, must reach Russia. “From a future perspective, Russia is contracting poverty. Until the country regains investment grade, it will take time. The West will collect this bill, make it pay Ukraine. The horizon of economic decline is 30 years,” he projects.

To deselect, tap the icon again

The saved news is in My Gazette in the section Saved contents. Read whenever you want.