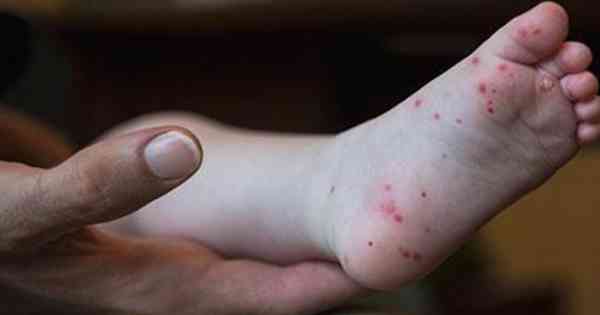 A day care center located in Ouro Preto, in the Central Region of Minas Gerais, has suspended classes until this Wednesday (20/4), after 22 children under five were diagnosed with hand-to-mouth syndrome. According to the Ouro Preto Health Department, the guideline is to stop activities at the day care center to prevent the virus from circulating. Another 24 cases of the disease were reported in other locations in the city.

Hand-to-mouth syndrome is a contagious disease caused mainly by the virus coxsackie A16, from the family of enteroviruses that normally inhabit the digestive system and can cause stomatitis – a type of cold sore that affects the mucosa of the mouth.

According to the secretary, the disease mainly affects children up to 6 years old, but adults can also contract the virus. It is common in this age group, because it is precisely when the little ones are in the phase of taking hands and objects to their mouths, facilitating the transmission chain.

The symptoms are high fever before the skin lesions, canker sores in the mouth region, sores such as blisters on the feet and hands, which may appear in the buttocks, in addition to vomiting and diarrhea.

“Parents need to keep their children who show symptoms of the disease isolated, because contagion occurs very easily. Transmission can also be through coughing and sneezing”, explains Ouro Preto Health Secretary Leandro Moreira.

Also according to the secretary, the action of interdicting activities at the day care center is in accordance with the incubation time of the disease – which is three to five days – and can prevent the acceleration of cases in the city.

The incubation time contributes to high transmission and therefore highlights the need to avoid contact with other individuals. “As there is no vaccine against hand-to-mouth syndrome, it is essential to adopt measures of personal hygiene and the environment in addition to the social isolation of patients”.

The Minas Gerais State Health Department (SES-MG) informs that it has been monitoring outbreaks of mouth-to-mouth disease since 2018. As of this Tuesday (4/19), 688 outbreaks of the disease have been reported.

More recent data from the Health Department of Minas Gerais (SES) on April 12 state that the outbreak of the virus affects other regions of the state. In the year 2022, 78 notifications were registered so far.

In the Regional Health Superintendencies of Manhuau/Manhumirim, Montes Claros, Itabira, Pouso Alegre and Varginha, only one case was confirmed until April 12th.

According to the SES, so far no notification of an outbreak of hand-to-mouth syndrome has been registered in the municipality of Ouro Preto, which is within the area of ​​action of the Regional Health Superintendence Belo Horizonte. If added to the numbers of Ouro Preto, the state has 124 cases this year.

In 2019, throughout the year, 21 cases of the disease were recorded in all the cities that are part of the Regional Superintendence of Belo Horizonte. Comparing with 2022, the historic city alone surpassed the numbers of 2019 and is already close to reaching those of 2021, which recorded 78 cases in the region.

She's our PC girl, so anything is up to her. She is also responsible for the videos of Play Crazy Game, as well as giving a leg in the news.
Previous American creates 50 mice in the house and still bathes pets in the kitchen sink – News
Next Alzheimer’s: Why Scientists Are Mistrustful of New Experimental Drug