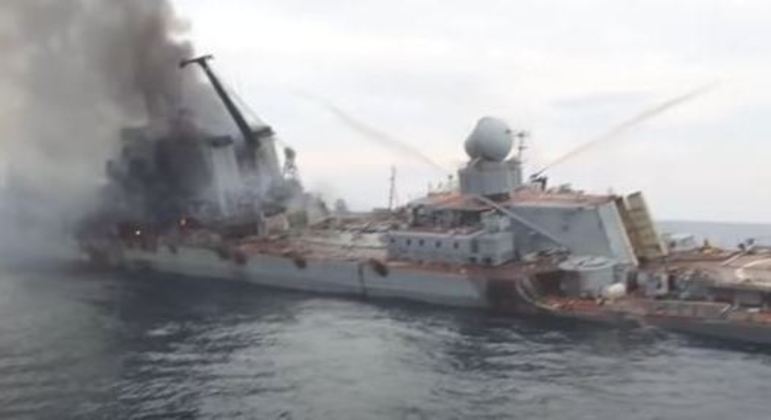 A photo of the Russian cruiser Moskva’s last moments before it sank in the Black Sea is circulating on the internet.

Moskva was photographed with a large column of black smoke rising from its rear. It is possible to see that there was already a certain inclination to the left side, an indication that the ship was about to sink.


Just an another one photo of damaged Moskva cruiser.
Similar angle, however with better visibility of the superstructure & P-1000 Vulkan launcher pads. pic.twitter.com/SmxMgycK5U

Initially, the Russian Defense Ministry denied the Ukrainian attack and even claimed that there had been an explosion inside the vessel itself. However, the US confirmed that at least two missiles were launched at the vessel.


According to a Russian portal, at least 37 people died in the sinking. It is estimated that 500 people were on board and that approximately 100 were injured.

The successful attack against the Russian military ship was considered a victory for Kiev. The Moskva was Russia’s most important vessel in the Black Sea.


Moskva began its operations in the Soviet era, in 1983, and participated in the Russian intervention in Syria from 2015.

The ship gained notoriety at the beginning of the war in Ukraine, when it was involved in the attack against the island of Serpents, when 19 Ukrainian sailors were captured and exchanged for Russian prisoners.