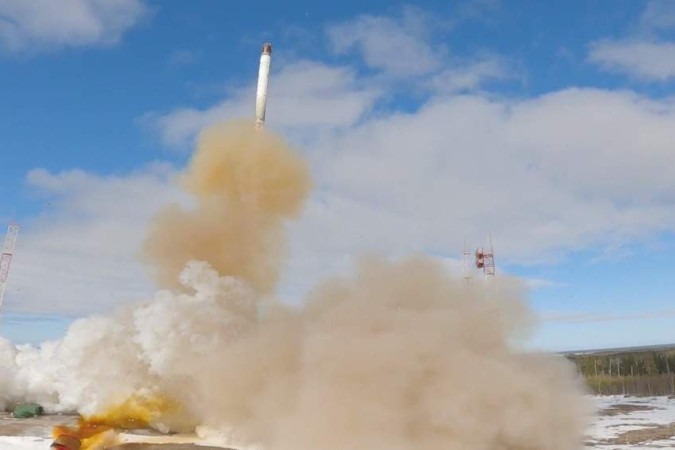 The Kremlin’s warning came in the form of a launch of the Sarmat, a new-generation intercontinental ballistic missile capable of reaching targets 18,000 kilometers away and carrying nuclear warheads. At 3:12 pm yesterday (9:12 am GMT), the projectile reached the sky at the Plesetsk cosmodrome, 800km north of Moscow. As the bombing continued in Ukraine and shortly after the test, Russian President Vladimir Putin celebrated the success of the shooting in an intimidating tone. “He (Sarmat) has no analogue in the world and will not have it for a long time. This truly unique weapon will bolster the combat capabilities of our armed forces, reliably protect Russia’s security against external threats, and make those who threaten our country with unbridled and aggressive rhetoric to think twice,” Putin said.

Russian Major General Igor Konashenkov, a spokesman for the Russian Defense Ministry, explained that the missile hit its target more than 5,000 kilometers from Plesetsk: the Kamchatka Peninsula, in the far east. “Once the test program is completed, Sarmat will become part of the Russian strategic forces,” he assured. The United States downplayed the test’s importance. According to John Kirby, a spokesman for the Pentagon, Moscow “properly notified” Washington of the launch, pursuant to obligations under the Nuclear Non-Proliferation Treaty (NPT). He also said that Sarmat did not pose a threat to the US and its allies.

Director of Strategy, Technology and Arms Control at the International Institute for Strategic Studies (in Berlin), William Alberque told the Courier that Russia had carried out so-called “ejection tests”, in which the missile is pushed out of the silo and there is the triggering of the first stage of the launch. “These operations took place in December 2017, in March 2018 and in May of the same year,” he recalled. “Today’s (yesterday) test is supposedly the first complete test of all stages, with Russia reporting that the warheads reached the Kamchatka Peninsula, at about 5,700km. It is worth noting that Moscow intended to carry out this test in the spring of 2019, but the missiles only started to be positioned in the silo in 2021. The program is significantly delayed.”

For his part, Nikolai Sokov, an expert at the Vienna Center for Disarmament and Non-Proliferation (VCDNP), called the launch of Sarmat “a routine event.” “The program has been ongoing since 2011 and has come to a logical conclusion after a delay of approximately 42 months,” he told the report. He sees “likely coincidence” in the fact that the test was taken at a time when Russia is waging war. “It is obvious that unavoidable propagandistic statements were made at the time of the test, but they are no different from similar statements about the completion of other previous war programs.”

According to Sokov, the Sarmat was designed with the purpose of penetrating the US missile defense system, as well as being part of Russia’s nuclear deterrent capability. “The choice of a heavy intercontinental ballistic missile was determined by its versatility: it can carry many payload variants — multiple warheads, as well as defense penetration aids designed to outmaneuver a missile defense system and maneuver supersonic warheads,” he said.

On the front, the strategic port city of Mariupol (southeast) was about to fall into the hands of Russian mercenaries and soldiers. Ukrainian negotiator and presidential adviser Mijailo Podoliak proposed holding a “special round” of negotiations in Mariupol itself, “without any conditions”. David Arakhamia, another Ukrainian negotiator, assured that he and Podoliak are “prepared to go to Mariupol and talk to the Russian side about the withdrawal of our military garrison and civilians”. Soldiers were still entrenched in a steel plant.

On a visit to Kiev, Charles Michel – President of the European Council – met with Ukrainian President Volodymyr Zelensky, and promised that he would do “everything possible” so that Ukraine “wins the war”. “You are not alone. We are with you and will do everything possible to support your efforts,” he declared.

UN Secretary General António Guterres sent letters to Zelensky and Putin asking to be received in Kiev and Moscow. “He wants to discuss urgent measures to bring peace to Ukraine and the future of multilateralism,” said spokesman Stéphane Dujarric. Russian troops are fighting in the Donbass (east), a region partially controlled by pro-Moscow separatists.

Sergiy Taruta, Ukrainian parliamentarian and former governor of Donetsk (between March and October 2014), in the Donbass region. Born in Mariupol

How do you see the Russian offensive in Donbass?

Ukraine has no option but to repel the attack by Russian troops in Donbass. We must return the Ukrainian territories to the 2014 borders that existed before the Russian invasion and the annexation of Crimea. Otherwise, we will have the situation of 2014 – of latent conflict. In 56 days of resistance, Ukraine has shown not only that it can hold positions, but also repel the offensive of Russian troops. For Ukraine, there is only one possible outcome: victory. For us Ukrainians, it is a matter of survival as a nation. I believe we have what it takes to win: spirit, will, support from Western partners and eight years of experience in repelling Russian aggression.

Does the Russian intercontinental ballistic missile test worry you?

Putin loves the show. The test of that missile is Putin’s new show. He does it to instill fear, for fear blinds determination. Ukrainians fight for independence. Being afraid is out of our script. Putin is capable of anything, including using nuclear weapons in Ukraine. But we know how to defend, counterattack and destroy. We’ll turn your weapons into scrap metal.

Is there a risk that Russia will make another attempt to capture Kiev?

Theoretically, there is such a possibility. In practice, however, given the presence of Ukrainian forces and the morale of our troops, this probability is small.

“Climbing is a threat to the world”, says Nikolai Sokov

“There are many rumors that Russia may use nuclear weapons against Ukraine, but this is pure speculation; such use is highly unlikely. The involvement of the United States and the North Atlantic Treaty Organization (NATO) in the war could lead to a In that case, nuclear weapons will certainly enter the picture—first as an explicit threat and potentially even as a use.

The situation around Ukraine is quite unpredictable, and this is outside of Russia’s declaratory policy. It is not entirely clear what actions the UN might see as tolerable and what could trigger a vigorous Russian response. Such an escalation, of course, poses the greatest threat to the world.”

“We beg for help”

In a video released on Tuesday, Sergey Volyna — commander of the Ukrainian Army’s 36th Marines Brigade — asked for help to keep him and his men from dying. “This may be the last call of our lives. We are probably facing our last days, if not hours. The enemy outnumbers us 10 to 1. They have the advantage in air, artillery, ground forces, equipment and tanks. We are defending a single object, the Azovstal industry, where, in addition to the military, there are civilians who have become victims of this war. We appeal and implore world leaders to help us. We ask you to use the procedure known as ‘extraction’ and take us to the territory of a state that is a third actor (in the war),” he said.