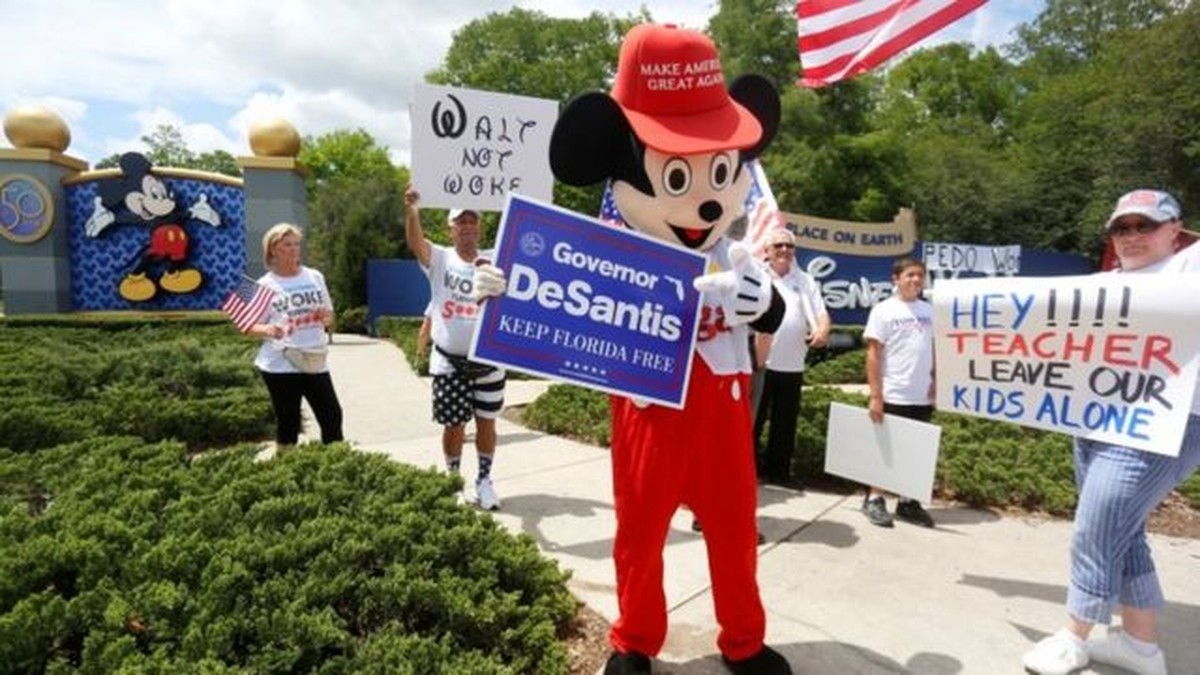 For more than half a century, when the “magical” world of Disney was developing in Florida, the US state granted the company a “special status” of self-government.

In its territory, which comprises about 100 square kilometers, the company has the same powers as any other municipality in Florida.

How much taxes are levied, how they are invested, security and the direction of the area are at the discretion of the Walt Disney World Resort.

The area, where the company’s theme parks, hotels and other recreational facilities are located, is called the Reedy Creek Improvement District (RCID).

However, that “special status” is threatened after a series of clashes between the company and the state’s governor, Republican Ron DeSantis.

Disney executives have voiced opposition to a controversial law passed in Florida that bans discussing sexual orientation and gender identity in elementary schools.

In retaliation, DeSantis, who is being touted as a possible 2024 White House candidate, urged his party-dominated state legislature on Tuesday to reverse the company’s “self-government” status.

DeSantis’ statements shed light on the RCID, a device unknown to many that is largely related to the success of Disney’s business.

Why was the RCID created?

In the mid-1960s, following the popularity of Disneyland in California, the creator of that entertainment empire, Walt Disney, began planning a second theme park, but this time on the east coast of the country.

At the time, central Florida, where Orange and Osceola counties are located, was in full swing, with new roads and a major expressway being built near an airport.

RCID was created in 1967 and covers thousands of hectares — Photo: Getty Images

Disney saw a great opportunity to implement its project in the area and bought thousands of hectares that, according to the RCID’s own website, at the time represented a set of uncultivated and marshy lands, without basic service infrastructure.

In 1967, the state legislature created the RCID, allowing the entertainment giant to build its massive complex outside the regulatory framework of neighboring municipalities, but on condition that it assume responsibility for its development without government investment.

The special district is made up of the theme parks and the cities of Lake Buena Vista and Bay Lake. Within its boundaries are 19 “landowners”, including Disney and its subsidiaries.

The company has to deal with issues as diverse as power generation and distribution, regulating building codes, as well as police, medical emergencies and firefighting.

The RCID finances its operations through taxes, landlord and tenant fees, utility revenues, and bond issues.

A five-member board of supervisors elected by the landowners governs the area.

In addition, the district has intergovernmental agreements to deal with surveillance and the judicial system.

Why does DeSantis want to end him?

The “Don’t Say Gay” law was proposed by the Republican majority in the state legislature and signed by DeSantis on March 28.

Disney, under pressure from its employees, who staged protests while the project was being discussed and sent letters to its directors, announced that it would withdraw political donations to the Republican Party in Florida. He also stated that his objective as a company is for the legislation to be overturned or defeated in court.

“Our employees see the power of this great company as an opportunity to do good. I agree,” Disney CEO Bob Chapek told US news website Politico.

Chapek also apologized because the company initially avoided commenting on the project.

According to Politico, Disney’s donations to Republicans in the 2020 election cycle totaled $913 million, while the direct contribution to DeSantis was $50,000.

Amid the controversy, the barbs between the company and the governor of Florida have not ceased. DeSantis even went so far as to say, after Chapek’s statements, that Disney “crossed the line”.

But the situation has worsened to the point that the state legislature is now considering legislation to eliminate the RCID and five other special fiscal districts.

The Florida Parliament is holding a special session this week in which it considers changes in its constituencies.

DeSantis told a news conference on Tuesday that he would include the proposal against Disney on the voting agenda.

“I announce that we are expanding what will be analyzed (by congressmen) this week,” he said.

“They will also look to do away with all the special districts that were enacted in Florida before 1968, and that includes Reedy Creek,” he added.

The bill could be approved as early as this Friday (22), members of the state legislature said, and the repeal of the RCID would take place in June 2023.

What would happen if the RCID ends?

Jenniffer Bradley, a GOP state senator and supporter of the bill, told reporters on Tuesday that special tax districts will have to cede their powers to counties where their territories are located if the proposal passes.

In addition, they will have the opportunity to pressure the Legislature to appeal against the decision.

However, neither DeSantis nor lawmakers offered further details on what would happen if the RCID’s status ended.

According to the American press, local governments would bear the infrastructure costs, which in Disney’s case represent billions of dollars.

In addition, there would be an administrative and regulatory challenge as Disney is a tourist area that receives millions of visitors annually.

What impact this would have on the company, which employs around 70,000 people, is also unclear.

So far, Osceola and Orage counties have not expressed opinions on the proposal, nor has Walt Disney World.

Food maven. Unapologetic travel fanatic. MCU's fan. Infuriatingly humble creator. Award-winning pop culture ninja.
Previous Two women were arrested in Florida for serving food mixed with marijuana at a wedding party | World
Next If you have these symptoms you may be lacking vitamin D; see list