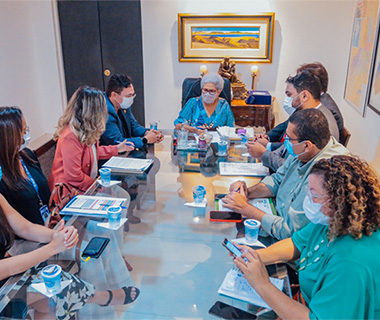 Amid the explosion of dengue cases in Piauí, Governor Regina Sousa (PT) participated in a meeting with the State Health Secretary, Neris Júnior, and the president of the Piauí Association of Municipalities (APPM), Paulo César, to discuss the worrying scenario across the state.

The urgency takes into account the bulletin for the 15th Epidemiological Week, released by Sesapi, which shows a rise of over 600% in the number of cases in the state compared to the same period last year and alerts to the critical situation in relation to the incidence of the disease in 25 municipalities in Piauí.

“We have 25 municipalities in a critical situation. Sesapi has the smoke cars and the materials for use, which is the last possibility. You have to do all the prevention and the last thing to do is smoke, but in those that are critical you have to do it, because you have to reduce the occurrences in these cities, but we also have to take care of the others”, said the governor.

In an interview with Cidadeverde.com this Wednesday afternoon (20), Neris Júnior, pointed out that the ministry has been monitoring and evaluating the situation in all cities in the state. are already equipped with the chemicals needed to distribute to endemic agents and the fogging cars to those municipalities that have the indication”, he said.

The state faces an explosion of cases of the disease. There are currently two confirmed cases of death from dengue, while another four are still under suspicion, and are awaiting medical examinations for confirmation.

Because of this, Sesapi does not rule out adopting actions such as that of Paraná, which declared a state of epidemic after registering almost 15,000 cases of the disease notified in just one week. “We have some municipalities in a state of alert. We will increasingly evaluate the numbers and, if necessary, Piauí should also take the possible and appropriate measures”, concluded the secretary.

She's our PC girl, so anything is up to her. She is also responsible for the videos of Play Crazy Game, as well as giving a leg in the news.
Previous ST registers 30 cases of dengue and 64 are under investigation – Farol de Notícias – Reference in Journalism in Serra Talhada and Region
Next Russia makes a veiled threat to Finland and Sweden, which are considering joining NATO: ‘We gave our warnings’ | World