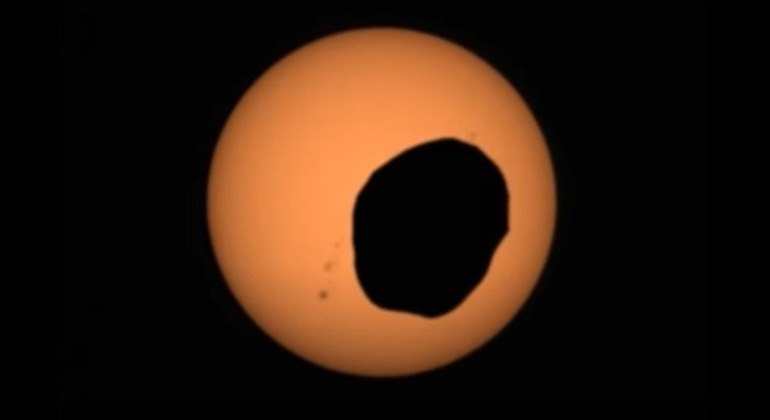 NASA’s Perseverance robot captured images of Phobos, the potato-shaped moon of Mars, crossing the face of the Sun. According to NASA, “These observations can help scientists better understand the moon’s orbit and how its gravity pulls on the Martian surface, shaping the Red Planet’s crust and mantle.”

The eclipse was recorded on April 2nd and lasted just over 40 seconds, which makes it much shorter compared to a solar eclipse involving Earth’s Moon. This is because Phobos is about 157 times smaller than Earth’s satellite.


Truly fascinating. I zoomed in with my Mastcam-Z camera on a Phobos solar eclipse. This detailed video can help scientists on my team better understand the Martian moon’s orbit and how its gravity affects the interior of Mars, including its crust & mantle. https://t.co/jVdJ4UwhDx pic.twitter.com/q45HwKwLIS

NASA explains that Perseverance’s Mastcam-Z camera has a sunscreen that acts like a sunglasses to reduce the light intensity of the phenomenon. “You can see details in the shape of Phobos’ shadow, like ridges and bumps in the moon’s landscape,” said Mark Lemmon, an astronomer who orchestrated most of the observations of Phobos from Mars.

As the moon circles Mars, it slightly deforms rocks in the planet’s crust and mantle, due to the force of its gravity. With this, geophysicists will be able to better understand the interior of the planet. As Phobos approaches the surface of Mars, it is doomed to collide with it in tens of millions of years.

Raju has an exquisite taste. For him, video games are more than entertainment and he likes to discuss forms and art.
Previous New Ebola outbreak hits the Democratic Republic of Congo
Next Shanghai tightens restrictions against covid due to rise in cases