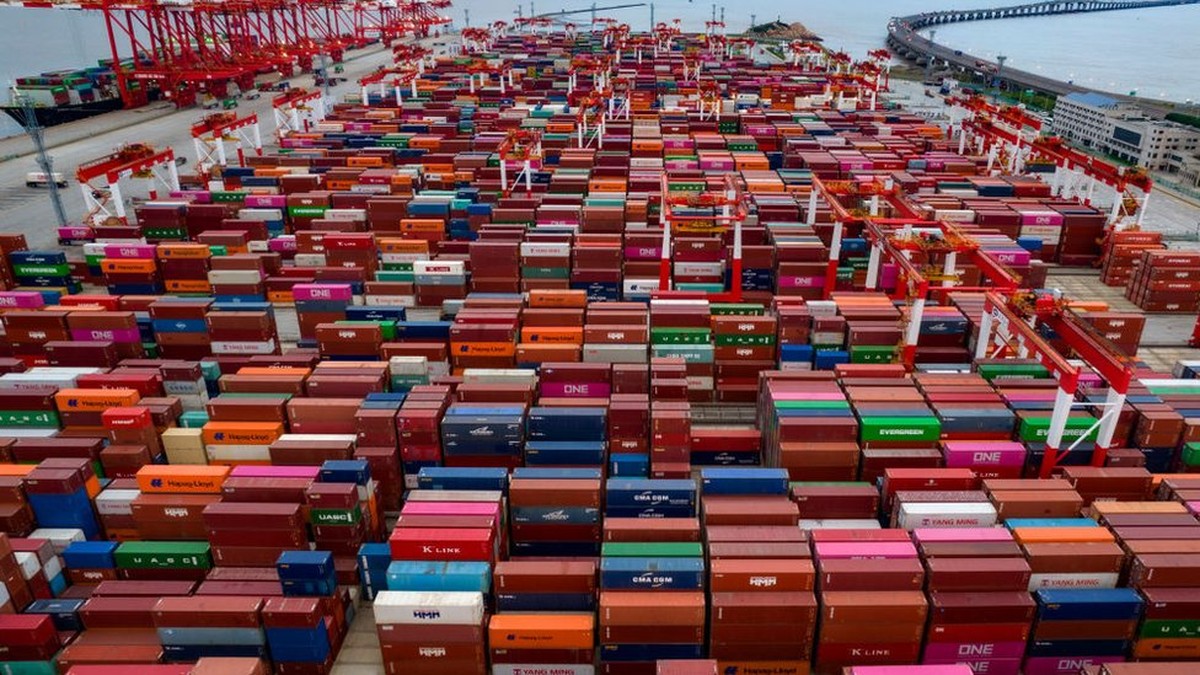 Dozens of cities in China are currently in partial or total lockdown following a new surge in coronavirus cases in the country due to the spread of the omicron variant. The situation threatens the Chinese authorities’ controversial “covid zero” strategy.

With 25 million inhabitants and a vital weight for the country’s economy, the city of Shanghai is suffering the worst wave of covid since the beginning of the pandemic, in Wuhan, more than two years ago.

The Chinese metropolis is not only a global financial center, but also one of the most important cargo ports for international trade. In the last ten years, it has been the largest port in the world in terms of cargo handling. In 2021, the port of Shanghai accounted for 17% of China’s container traffic and 27% of exports.

However, the confinement to which the city is subjected makes it difficult for trucks to arrive to take goods to other locations or distribute them to nearby factories. Many industries, such as Volkswagen and Tesla, had to stop their activities.

“The restrictions mainly affect the roads in and out of the port, resulting in a backlog of containers and a 30% reduction in productivity,” explains Mike Kerley, investment manager at Janus Henderson.

Added to this is the lack of port workers to process the documents necessary for ships to unload their goods or carry out the departure inspection.

Now boats are also piling up on the coast and in the canals around the harbor waiting for the green light to dock.

Another problem is that thousands of containers are piling up at the port, putting the global supply chain in jeopardy once again just when analysts were confident of its recovery from the pandemic.

Although the port remains operational, it is increasingly clogged.

The European Union Chamber of Commerce estimated that there were 40% to 50% fewer trucks available in Shanghai and that less than 30% of Shanghai’s workforce can return to work. The measures imposed by China in this new wave of covid determine that everyone who is diagnosed with the disease must be in quarantine even if they do not show symptoms.

A large part are quarantined in centralized facilities, where many people complain of poor conditions.

The port of Shanghai is the largest in the world for cargo handling — Photo: Getty Images via BBC

“Temporary shortages may be apparent for these products as export through Shanghai represents 30-50% of total Chinese exports of these products,” said Kerley of Janus Henderson.

Ocean Network Express, a Japanese shipping company, has warned customers that containers are piling up at the port of Shanghai.

“The situation has not improved since our last update on April 6. Road transport remains limited and terminals are still congested, while the refrigerated zone connection capacity remains very strained,” the company said in a statement.

The world’s largest shipping company, Maersk, also issued a statement this week saying “several ships will skip the port of Shanghai on their routes” due to a lack of available container space.

“There is a lot of concern that exports will be affected and the inflationary impact on the world, including Latin America, which is a major trading partner of China,” says Alicia García-Herrero, chief economist for Asia-Pacific at investment bank Natixis. .

“As the port’s capacity is not the same as in March, nor in February, it will take some time to resolve all this. Even if the city’s lockdown ends tomorrow, there is an accumulation of capacity that will not be resolved quickly”, says Rodrigo Zeidan, professor of Economics and Finance at NYU Shanghai, to BBC News Mundo, the BBC’s Spanish service

“Inflation will continue for a while. Prices for many goods will take some time to stabilize,” adds Zeidan. Bank of America analysts believe the most severe impact is likely to be seen in late April.

“While authorities have already noticed the problems and started taking action in recent days, it is likely that the (supply chain) disruptions will spread across the world within 3-6 weeks and last at least until the end of the second. quarter,” the bank says in a statement.

What will happen in Latin America

The effect in Latin America could be twofold, Zeidán believes.

First in terms of economic productivity, he says, because even if there is demand from China for all the raw materials it imports from Latin America, shipments will not be easy to do.

“This is already happening. Shipping rates have been getting insanely high for a long time and prices are going up.”

And second, inflation will go up a little more.

However, several of the experts consulted believe that, given the importance of the port of Shanghai to China’s trade, the restrictions are unlikely to last long. They say the Chinese government is most likely to do its best to get back to normalcy as quickly as possible.

For Zeidan, the situation should only improve in mid-May.

Shanghai adopts lockdown because of Covid, and 25 million people are kept at home