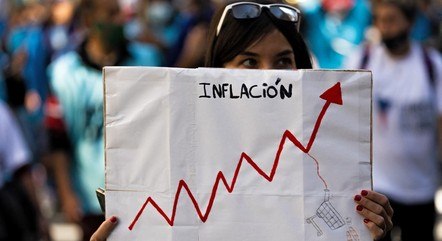 Countries beat record high prices, and Brazil is 3rd in the ranking – Notícias

Abhishek Pratap 3 weeks ago News Comments Off on Countries beat record high prices, and Brazil is 3rd in the ranking – Notícias 14 Views

Inflation has been a problem not only for Brazil, but also for other countries. The increase in the price of raw materials, mainly oil, due to the war between Russia and Ukraine, has pressured prices around the world.

In addition to the conflict, there are lockdowns in china, which have caused production bottlenecks and should slow down the country’s economy. These factors, added to local issues, caused several nations to register a large variation in inflation.

Since the beginning of March, the IMF (International Monetary Fund) warns of rising prices and highlights the need for interest-rate monetary policies to curb the advance of prices.

Check out which countries the rise in inflation reached record levels:

In March, inflation in the country grew 6.7% in relation to the previous month and accumulated an annual high of 55.1%, the highest rate in 20 years, according to data from Argentina’s Indec (National Institute of Statistics and Census). In the first quarter of 2022 alone, food prices rose by almost 20%.

The reasons for the rate growth go beyond external factors. There is also a chronic currency problem in the country, mainly caused by currency issuance.

Russia is feeling in its economy the impacts of the war started by the country itself. Inflation reached 17.49% in one year, as pointed out by the Ministry of Economy. This is the highest percentage since 2002.

In March, the country also had a record monthly rate increase (7.61%), the highest level since 1999.

The rise in prices is being driven by the volatility of the ruble and the sanctions imposed by the West. The Russian central bank expects the rate to continue growing.

Data from the IBGE (Brazilian Institute of Geography and Statistics) showed that the inflation accumulated in the last 12 months a high of 11.30%, the highest value since 2003. The rate rose 1.62% in March, the biggest increase in a month since 1994, when the Real Plan had not yet been implemented. To contain the rise in prices, analysts predict interest rate hikes.

In the country, the rise in prices was driven by the conflict in Ukraine, which has impacted fuels. With the war, the price of a barrel of oil became more volatile, since Russia is a major producer of the commodity. As most cargo transport is done by road, the entire production chain was impacted.

However, prices have been rising since last year. Among the reasons are more expensive energy because of the scarcity flag which was in force until April 16 of this year and problems in exports, crops and plantations of imported products that faced excessive rain and droughts.

The United States recorded the highest inflation in 41 years in March, 8.5%, according to the country’s Department of Labor. The reason for the soaring prices is mainly the war between Ukraine and Russia, which affects the food and energy market. The country is also experiencing supply-related problems because of the lockdowns in China.

Gasoline was one of the factors responsible for this index, with a price increase of 18.3% in one month. Energy, on the other hand, rose 11% and food, 1%. In March, Joe Biden made the biggest oil release in history to try to lower the price of fuel.

To contain the advance of prices, the FED (Federal Reserve) intends to adopt more aggressive measures. The central bank’s monetary committee plans to raise interest rates by 0.5 percentage point in May, aiming to return inflation to 2%.

The producer price index of the China (PPI) rose 8.3% in March, according to data from the National Bureau of Statistics. The rate beat expectations of 7.9%, estimated by Reuters.

The driving factor for the rise is the production and supply bottlenecks caused by Covid-19, which has made China start again strict lockdowns based on a zero tolerance policy for the virus. In addition to the increase in raw material costs.

In the euro zone, inflation rose in the 19 countries and hit a record. The annual rate reached 7.4%, according to Eurotast (the European Union Statistics Office), the highest level since 1999, when a common currency was adopted.

The price of natural gas and fuel soared with the war between Russia and Ukraine. Energy rose 4.36%. But the price increase was widespread and also affected food, alcohol and tobacco (1.07%) and services (1.12%).

Inflation also accelerated in the UK. According to data from the Office of National Statistics, in March, annual inflation accumulated a high of 7%, the highest level in 30 years. The forecast is for the rate to reach 7.5% in April with an expected increase in energy.

The forecast of the Office for Budget Responsibility is that the peak of the index is 8.7% and happens in the last quarter of 2022. It would be the highest value in 40 years.

Besides the gwar in ukraine, inflation rose as activities returned to normal. Sectors that registered a drop during the isolation by Covid-19 had a strong rise in recent months, such as restaurants and hotels.

Financial markets estimate that the British Central Bank will end the year with interest rates between 2% and 2.25%. At the moment it is 0.75% and should change to 1% in May.

The annual inflation of Mexico reached the highest level in 21 years, 7.45%. Again, fuel was the villain, along with natural gas, airline tickets and food. The index has made it less likely that the Mexican central bank will cut interest rates in May, as had been expected, as the target for price increases is 3%, increasing pressure on the country’s monetary policy.

* Intern at R7under the supervision of Ana Vinhas

Food maven. Unapologetic travel fanatic. MCU's fan. Infuriatingly humble creator. Award-winning pop culture ninja.
Previous Has arrived! Google releases the 1st beta version of Android 13 for models of the Pixel line
Next PS Plus and PS Now subscribers will be converted to the new service based on the longest-term plan