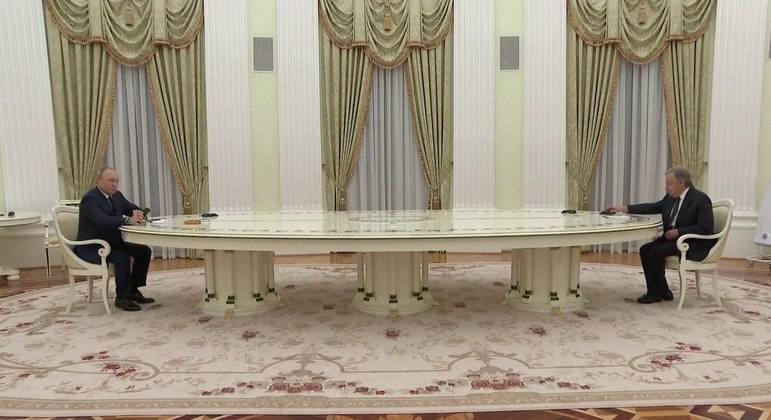 Russian President Vladimir Putin told UN Secretary-General António Guterres on Tuesday (26) that he is still confident in the possibility of a diplomatic solution to the conflict in Ukraine.

“Although the military operation [russa na Ucrânia] developing, we continue to have hope in the ability to reach agreements through diplomatic channels. We’re negotiating, we don’t reject [negociar]”, Putin told Guterres, who is visiting Moscow.

Sitting across from Guterres at a long table, Putin said the talks were off course because of accusations of atrocities that Russia had committed in the town of Bucha, near Kiev, Ukraine’s capital.


“There was a provocation in Bucha, with which the Russian army had nothing to do. We know who organized this provocation, through what means and who were the people who carried it out,” he added.

The speech of the Russian president in a calming tone contrasts with the position of the Russian deputy ambassador to the UN, Dmitry Polyanskiy, who this Monday (25) was against an immediate ceasefire.

“We don’t think a ceasefire is a good option at the moment, because the only advantage it would offer would be the possibility for Ukrainian forces to regroup and do more provocation,” explained Polyanskiy.


Hours before the meeting with Putin, Guterres had already positioned himself in favor of a ceasefire as soon as possible.. For the UN chief, it is necessary to find ways to reduce the suffering of Ukrainian civilians.

“What interests us very much is to find the means to create the conditions for an effective dialogue, to create the conditions for a ceasefire as soon as possible”, declared Guterres. “Although the situation in Ukraine is complex, with different interpretations of what is happening there, it is possible to have a serious dialogue on how to act to minimize the suffering of the people.”