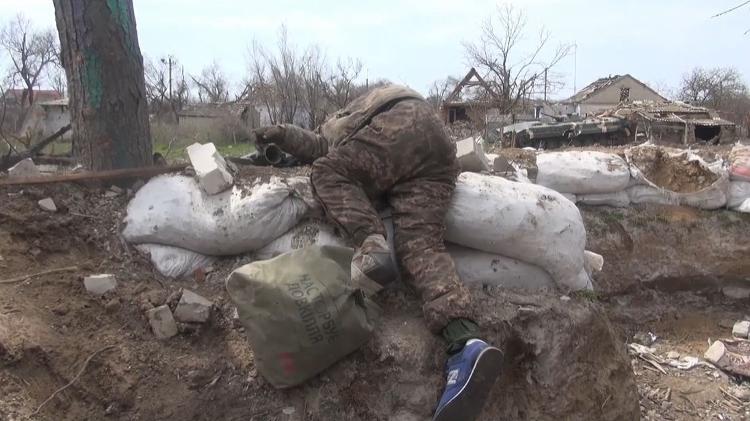 Russia’s Defense Ministry said in a report on Wednesday that “more than 120 nationalists and 35 armored vehicles were destroyed” as a result of air strikes in Ukraine, invaded 63 days ago. The government also said it had destroyed a “large amount” of weapons supplied to Ukraine by the United States and European countries. In total, Russian forces pointed out that their “rocket and artillery troops completed 573 fire missions overnight”. The information could not be verified with independent sources.

According to the ministry, “hangars with large amounts of foreign weapons and ammunition, delivered to Ukrainian forces by the United States and European countries, were destroyed with high-precision Kalbir missiles fired from the sea at the aluminum factory in Zaporizhzhia, southeastern Ukraine”.

Russia even reported explosions in towns near the border with Ukraine, which did not take these actions.

For its part, the Ukrainian government estimates that the new weapons, promised by allied countries in recent days, should take three or more weeks to reach Ukraine and take effect in the conflict. “It will be late May or early June when the required amount arrives and starts to have a serious impact on the battlefield,” Oleksiy Arestovych, adviser to the head of Ukraine’s Presidency Cabinet, said in an interview.

The use of allied weapons already raises a warning for the conflict because Russia has indicated that it is ready to retaliate in case of use. The United States plans to hold monthly summits with allied countries and NATO (North Atlantic Treaty Organization) on the situation in Ukraine.

In response to the sanctions it has suffered, as of today, Russia has cut off gas supplies to Poland and Bulgaria. The move is retaliation by the Russian government for countries’ refusal to pay for energy in rubles and for supporting Ukraine in the war. the EU (European Union) qualified the Russian measure as “blackmail”.

Despite still registering attacks by Russian forces, mainly in the east and south of the country, Ukraine has responded.

The Ukrainian Armed Forces said that, “only in the Donetsk and Lugansk regions”, separatist areas, “nine enemy attacks were repelled”, indicating the destruction of tanks, artillery systems, armored vehicles, among others.

In Avdiivka, a city about 700 kilometers from Kiev, bombings caused fires. According to the military chief of the Donetsk region, however, the Armed Forces of Ukraine repelled an attempt by Russian troops to advance in that direction.

In the south, a bridge was hit today in the Odessa region, according to Ukraine’s railway company, which is still assessing the “degree of damage to infrastructure”.

A hospital in Sievierodonetsk, in the Lugansk region of eastern Ukraine, was hit by an attack today. According to the governor of Lugansk, Sergey Gaidai, a woman died.

“The Russians knew the hospital was not empty,” Gaidai said. “There were patients, in different conditions, with doctors. And that didn’t stop them.”

According to Gaidai, “the destruction of the building is significant”. “Multiple floors were damaged at once.”

The governor said this was one of two operating hospitals in the region. The other is in the city of Lysychansk.

The situation remains tense in the region of the port city of Mariupol. According to the Armed Forces of Ukraine, Russia “is exerting massive fire and blocking our units in the area of ​​​​the Azovstal plant”, where civilians are sheltering.

According to intelligence from the UK’s Ukrainian Defense Ministry, most Russian air strikes on Mariupol are carried out “using unguided free-fall bombs”. “These weapons reduce Russia’s ability to effectively discriminate when carrying out attacks, increasing the risk of civilian casualties.” The information could not be verified with independent sources.

The Russian army has conquered several locations in eastern Ukraine in an offensive to seize control of the Donbass region, the Ukrainian Defense Ministry announced. Russian forces dislodged the Ukrainian army of Velyka Komyshuvakha and Zavody in the Kharkiv region and took control of Zarichne and Novotoshkivske in the Donetsk region.

Zarichne is just 50 kilometers from the regional center of Kramatorsk, where dozens of people died a few weeks ago in a Russian attack on a train station. The Defense Ministry warned that Russian forces “continue the offensive towards Nyzhnye and Orikhiv” in the central region of Zaporizhzhia.

Pro-Russian separatists have controlled the Donetsk and Lugansk regions since 2014, when the Russian government annexed the Crimean peninsula after protests that brought down the then Moscow-linked Ukrainian president. Russia says the offensive in the east should create a land link between territory under separatist control and the Black Sea peninsula.

Authorities in Moldova’s pro-Russian breakaway region of Transnistria announced that a village on the Ukrainian border, which is home to a major Russian army ammunition depot, had come under fire. “At night, several drones were seen over the village of Cobasna,” the Transnistria “interior ministry” said in a statement.

The same source also pointed out that on Wednesday morning “fire was recorded towards Cobasna from Ukraine”, which did not cause any casualties. Cobasna is two kilometers from the Ukrainian border.

The village is home to a large Soviet-era weapons depot that is under the control of Russian soldiers deployed in that territory. The self-proclaimed “republic” of Transnistria broke away from Moldova in 1992 after a brief war against that country. Since then, 1,500 Russian troops have been stationed in the region.

Fears have been growing for a few days that the war in Ukraine will spread to Transnistria. A Russian general recently claimed that the Kremlin’s offensive in Ukraine was aimed at creating a corridor to this breakaway region.

The separatists reported on Monday and Tuesday a series of explosions in the self-proclaimed “republic”. In response, Moldova announced measures to strengthen its security and called for calm for its population. Ukraine, in turn, accused Russia of wanting to “destabilize” Transnistria in order to justify military intervention.

(With Reuters, AFP, DW and Ansa)