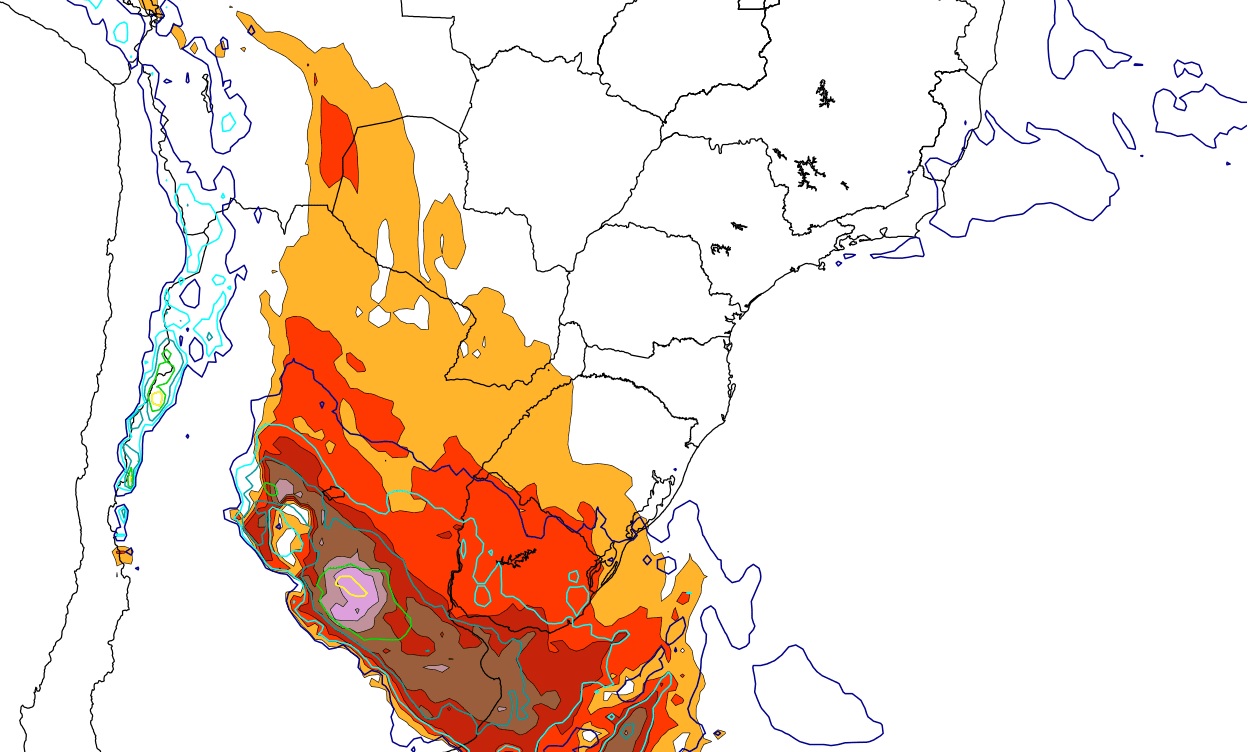 Tornadoes can form in Uruguay and Argentina

One of the most dangerous situations of severe weather in years in the region will settle in Central Argentina and Uruguay between the afternoon and evening of this Tuesday and Wednesday in a scenario of serious meteorological risk with the probability of locally destructive storms due to wind and hail of various sizes, as MetSul Meteorologia comes warning since sunday and yesterday reinforced with warnings for the Argentine and Uruguayan territories.

One of the concerns is the possibility of tornadoes, accompanying long-lived storm supercells that tend to form in the region. It is a condition very similar to the severe weather waves that occur in the Central Plains of the United States between the months of May and June.

Meteorologist Matias Bertolotti, presenter of the Argentine television news channel TN, warned on his social networks that “these type of days do not occur very often and, in fact, for several years there has not been such a clear probability of severe weather. and intense like this.”

Nacho Lopez Amorim, from the National Meteorological Service of Argentina, shares the concern about very severe weather and emphasizes that the SMN has already issued warnings of severe storms of orange level for Buenos Aires.

Models indicate the possibility of tornadoes in the region due to conditions of extreme instability and a combination of factors that dramatically increase the risk of the phenomenon. The EHI (Enhanced Helicity Index) values ​​are high for the West Coast of Uruguay and the Northeast of Argentina.

Another variable, Significant Tornado Parameter, indicates the risk of tornadoes in Central Argentina and Uruguay. The EHI indexes, a variable used to predict tornadoes, are particularly high for the West and Northwest of Uruguay at the end of the day and at the beginning of the Wednesday.

This is a particularly dangerous condition in severe weather due to the high risk of locally very intense to violent storms with destructive wind and hail potential. The city of Buenos Aires and its metropolitan area, the so-called conurbano, are among the locations with a high risk of very severe weather.

Analysis of the atmospheric dataset projected by the numerical model package suggests storms with locally torrential rain, but the greatest concern is with the prospect of occasionally severe to violent hail storms – which can be large in some places – and wind storms. with risk of dowbursts (downdrafts) and even the occasional formation of tornadoes.

First, a low pressure center that will give rise to a bomb cyclone will be acting in the region with very low surface pressure values. Models indicate the possibility of 995 hPa to 998 hPa in the province of Buenos Aires, with values ​​below 1,000 hPa being especially critical for severe weather.

Second, a low-level jet stream (JBN or LLJ) will transport very hot air to the region where the storms will form. The jet will be very intense, with wind between 1000 and 2000 meters of altitude, from 100 km/h to 150 km/h. With the advance of a cold front, the divergent wind pattern (shear) will be huge and favorable conditions for tornadoes will be created.

Therefore, numerical models are projecting extremely high instability indices for Central Argentina. Indices such as CAPE, Lifted, SWEAT and Showalter have values ​​projected by numerical models between the afternoon and evening of Tuesday and the beginning of Wednesday in very severe weather levels.

How to consult the maps

The MetSul Meteorologia subscriber has anytime access to all maps of this bulletin and many others with projections of accumulated rain, temperature, risk of frost, risk of hail, atmospheric instability indices for storms, forecast graphs and much more from of our high resolution model WRF and the main international meteorological models such as the North American GFS, the European, the German Icon, the Canadian and others. Consult our maps section and subscribe at metsul.com/subscribe.