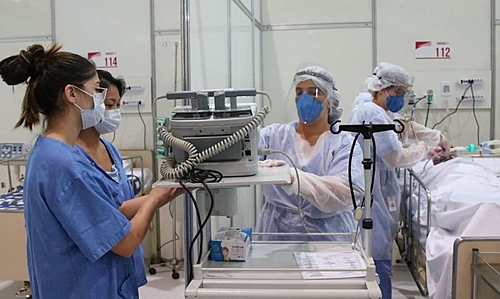 After a legislative journey that began in the Senate in May 2020, the proposal establishing the national floor for nursing must be voted on in the plenary of the Chamber of Deputies on May 4th (Wednesday). The projection was closed from an agreement between different leaders and the president of the House, Arthur Lira (PP-AL), who confirmed the date this Tuesday (26).

The measure is being processed as Bill (PL) 2564/2020 and was already approved in the Senate in November last year, now depending on the approval of the Chamber. The text has broad agreement among parliamentarians.

“I believe that we will have a majority in the Chamber of Deputies, but this depends a lot on the mobilization of nursing professionals, health professionals who are talking to parliamentarians in states, municipalities, on social networks”, says the PL rapporteur, Alexandre Padilha (PT-SP).

The PL provides for an initial minimum wage of R$ 4,750 for nurses, with 70% of this amount for nursing technicians and 50% for nursing assistants and midwives. The idea is that the amount is corrected annually according to the National Consumer Price Index (INPC).

According to Padilha, the effort of supporters has been to approve the text as it is today, so that the PL goes directly to presidential sanction. If the text is amended, it will have to undergo a new evaluation by the Senate.

“The government has resistance and has tried to demoralize the floor, including presenting a calculation on the impact that was not true, but we managed to counter this in the report we made of the working group (WG). The impact of creating the floor is less than 5% of the entire investment that is made in the SUS and less than 4% of all health plan billing”, underlines Padilha.

The Ministry of Health even questioned the text based on fiscal discourse and stated that the total cost of the measure would be R$ 40 billion annually. Already in the calculations of the parliamentary WG that studied the subject, the PL would cost R$ 16.3 billion.

The national president of the Brazilian Nursing Association (Aben), Sônia Acioli, says that the category continues to mobilize and prepares a large demonstration for the next 4th, in Brasília.

The objective is to intensify the chorus for the approval of the PL with the parliamentarians at the door of the Chamber. The category hopes to bring together caravans from different parts of the country.

“It is essential that we make a wide mobilization on the 4th to see if we can establish this floor. We know that nursing had great visibility during the pandemic period, but it suffers a lot, suffers from salary devaluation, lack of professional recognition ”, he says.

She says that the category has been increasing political pressure to prevent the vote from being postponed by the deputies. And highlights that the approval of the floor is a strategic measure to ensure the proper functioning of the Unified Health System (SUS).

“Nursing is the basis for the consolidation of the SUS, which needs to be strengthened. Society does not always identify this, but it depends on nursing to face the various problems that are experienced in the health area”, she recalls.

“To provide health care, we need to have adequate working conditions, so that we can really provide qualified care”, amends Sônia. She points out that the wage devaluation of the category also helps to encourage high working hours, so that strenuous working hours worsen the work context within the health networks.

“This creates situations of fatigue, loss of perception and psychological exhaustion that expose the patient to procedural errors, as well as generate work accidents and occupational diseases. This is also why we need floor approval,” he concludes.

She's our PC girl, so anything is up to her. She is also responsible for the videos of Play Crazy Game, as well as giving a leg in the news.
Previous NATO Fighters Intercept Russian Aircraft Over Baltic and Black Sea – Air & Naval Defense
Next US refuses to ‘act as if nothing happened’ after Putin invited to G20 summit – News