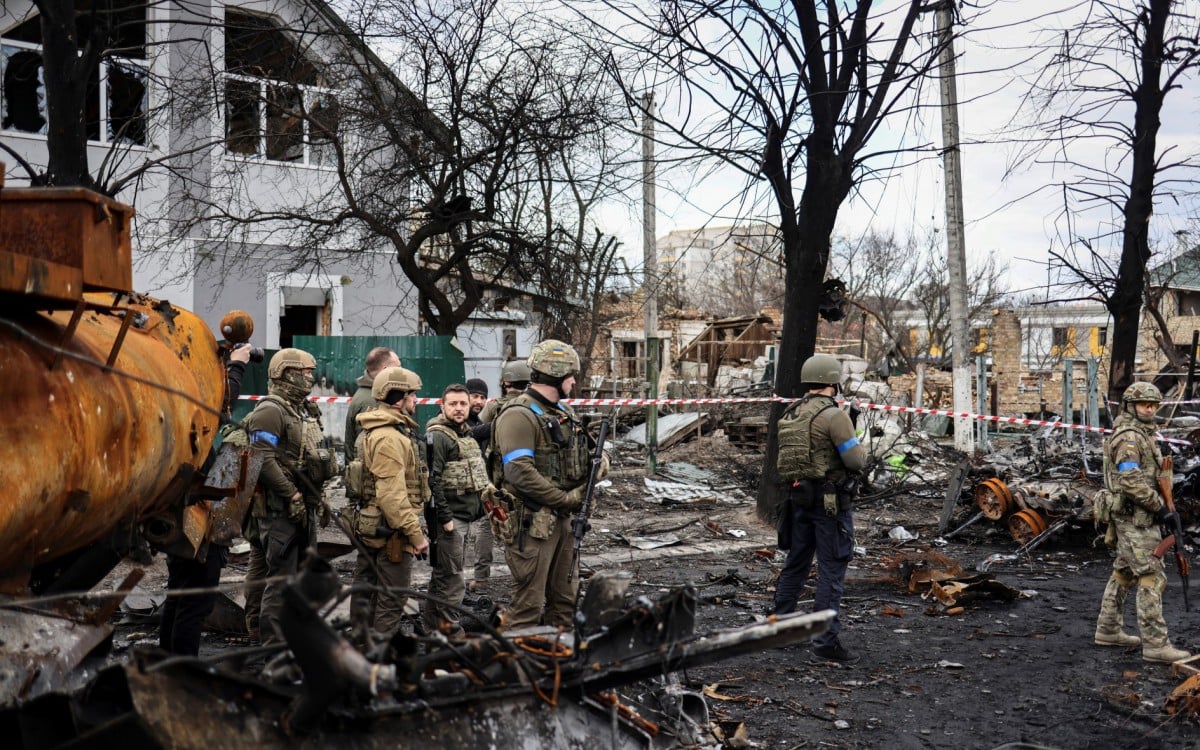 When he closes his eyes, Vitaly Zivotovsky sees prisoners with white bags on their heads like those led by Russian troops at gunpoint and with their hands tied.

His home in the town of Bucha, now synonymous with the atrocities Ukraine accuses Russian forces of occupying the region in March, has become a base for some Moscow soldiers and a hellish prison for him, his daughter and their neighbor, whose husband was murdered.

“We were shivering not from the cold, but from fear, because we could hear what the Russians were doing to the prisoners,” explains Zivotovsky in front of his now-burned house. “We had no hope,” he admits.

The city northwest of Kiev has come to international attention for the discovery of at least 20 bodies in civilian clothes on Yablunska Street (apple tree in Ukrainian).

For the villagers who survived, the memory will haunt them forever.

“What can you feel? Just horror,” says Viktor Shatilo, 60, who has documented the violence from his garage window with photographs. “It’s a nightmare,” he adds.

Before Russian troops captured Busha a few days after the invasion began, this was a small but ever-expanding town on the outskirts of Kiev. It soon became a trophy on the way to the capital.

Just as the war began, a Russian armored vehicle broke into Zivotovsky’s garden on February 27 and began shooting at a neighboring building, setting the upper floors on fire.

But it was a week later that troops took control of his home and locked him and his 20-year-old daughter Natalia in the basement, warning them they would be killed if they tried to leave without permission.

Get out, or I throw a grenade

Soldiers ate, slept and ran a field hospital and operations center in the house built by Zivotovsky’s family, just a minute’s walk from Yablunska Street.

Aiming to save his life and that of his daughter, the 50-year-old addressed soldiers in Russian and spoke about his family and his faith in God.

It wasn’t long before he saw soldiers carrying a hooded detainee to their home, a scene he had heard or seen on at least seven other occasions, all followed by interrogation, beatings and screaming.

Traces of the occupation are everywhere in his destroyed home: packets of rations, a camouflaged combat manual and a wooden stick with the word “MORAL” hand-scrawled in Russian.

At one point, the Zivotovskys’ trauma intersected with that of their neighbor across the street, Liudmila Kizilova.

Russian troops shot her husband to death on March 4 and the 67-year-old woman was left alone in her home, she told AFP.

She then stayed in her neighbors’ basement for several days after Vitaly asked the Russians to ensure her safe crossing of the street, still reeling from the murder she heard committed.

It happened when her husband, Valery Kizilov, came out of the basement where they had taken refuge. The woman heard the shots, then silence and then the order: “If there’s anyone else below, get out or I’ll throw a grenade”, recalls the widow.

Looking for her husband

She left, but Russian troops refused to explain what had happened to her husband and sent her back to the basement with strict instructions to stay there.

Kizilova waited until nightfall, crawled around the house with a flashlight until she located her husband’s body.

“He was lying down, shot in the head, there was a lot of blood. But I found him”, he explains.

Russian soldiers buried the body in the garden on March 9. When they were done, they poured some whiskey they’d taken from the house and offered it to her, which she declined.

The next day, the woman managed to escape to a new life without her husband. “I don’t know if I’ll recover without him, everything starts from scratch now”, she confesses.

“If I were young, there would still be hope of rebuilding something,” he adds.

Zivotovsky and his daughter escaped the same day, after lying to soldiers that they were going to visit a relative’s home but would return.

When the man came out of the basement to get the permit, he saw a dismal scene in the kitchen: three prisoners kneeling with bags over their heads and tied behind their backs.

When he allowed AFP to visit his home, badly damaged by a fire that must have started after his departure, there was a stain that looked like dried blood on the same spot on the floor where he saw the prisoners kneeling.

For some reason, Russian troops allowed him and his daughter to leave along with a promise that they would return and a threat to blow up the house if they didn’t keep their word.

“God forbid that anyone should go through something like this,” says Zivotovsky. “We are alive only by chance.”

For many survivors like them in Ukraine, the trauma of war will manifest itself in its own way, and not always immediately.

“Some people already have PTSD and some are still at the stage where they will feel it later,” says Aliona Krivuliak, coordinator of the Ukrainian unit of La Strada, a women’s rights organization.

“But each will be traumatized by the war in their own way,” he adds.

Still, for Shatilo, the Yablunska Street resident who documented the violence, remembering what happened may be the most important thing.

He risked his life to take pictures so that “children and grandchildren could see what was happening, so they wouldn’t know it on television, but in real life”.

“But many have seen it and I think they will remember it for hundreds of years.”