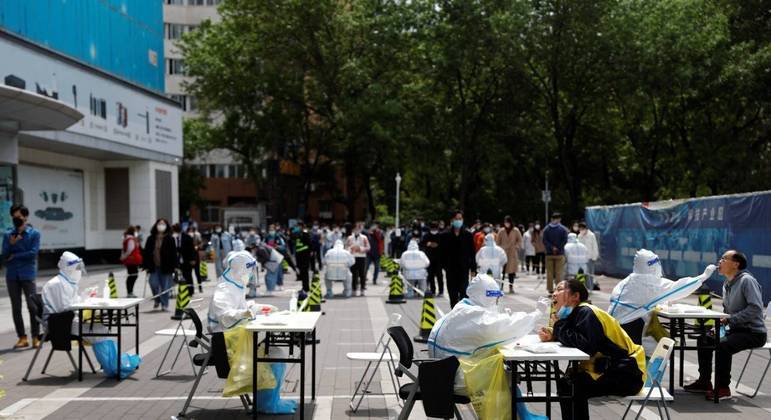 Beijing will strengthen measures to fight Covid-19 with the mandatory examination for people to have access to various public places, announced the authorities of the Chinese capital.

The decision was announced on the first day of a long Labor Day weekend. The Chinese usually take advantage of this date to travel – this year, however, the plans of thousands of people were thwarted.

Many residents must stay at home due to the most serious outbreak of Covid in China since the country detected the new coronavirus in late 2019 and faced the first wave of the disease in early 2020.

To combat the Ômicron variant, which is very contagious, the Chinese authorities have reinforced the “Covid zero” policy, which consists of large-scale tests and confinements when the first cases are detected.


The strict measures caused a slowdown in the country’s economy and growing frustration among the population.

Beijing announced that, after a five-day holiday break, access to public space will be limited, and that from May 5, it will be mandatory to present a negative Covid test taken the week before to enter “various public places” and to “use public transport”.

The news was released on the Chinese capital’s WeChat app account.

For activities such as sporting events or group travel, you will need to present a Covid test of less than 48 hours, as well as a complete vaccination certificate.

China recorded 10,700 new cases of Covid on Saturday, the majority in Shanghai, the country’s economic capital.

This metropolis, in the eastern region of the country, has been in confinement for almost a month and is the largest active focus of the disease in the country, with almost 10,100 cases. The number, however, is falling and represents almost half of the incidence recorded in early April.

In Beijing, 54 cases were reported in the last 24 hours, according to the National Health Commission.