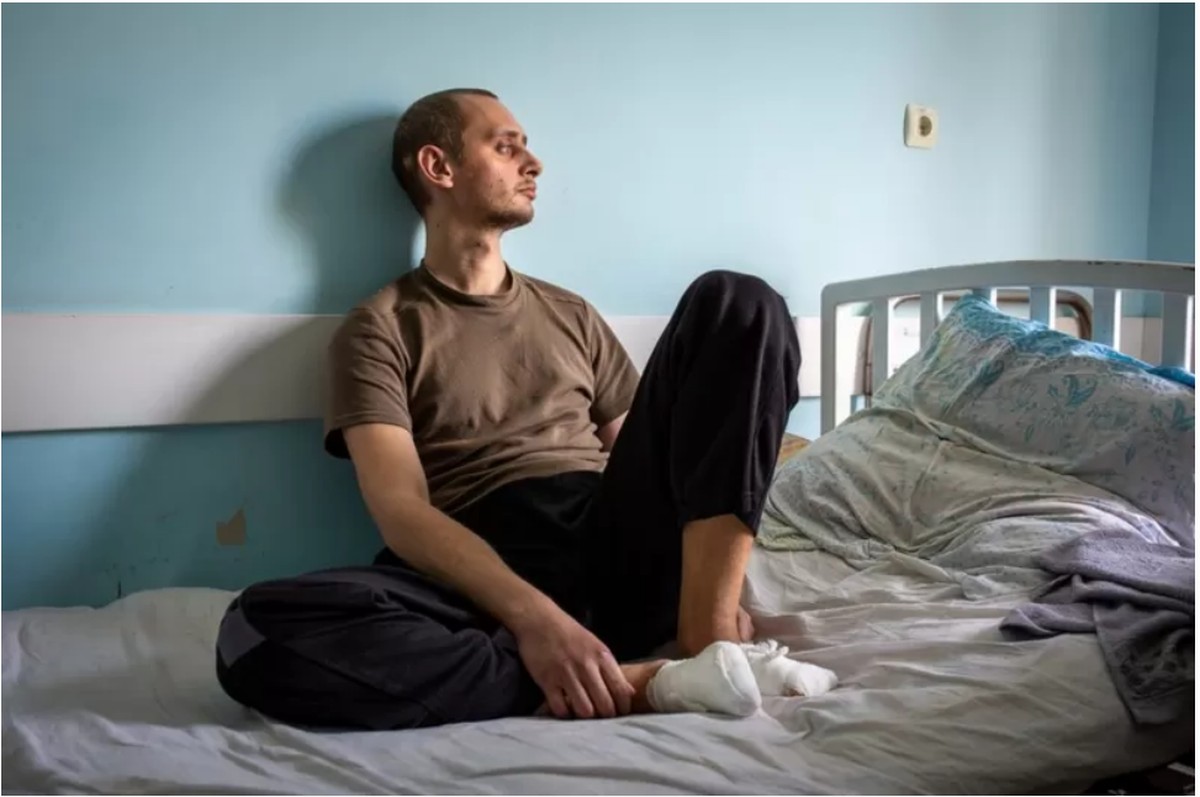 ‘I was in pieces’: the ordeal of torture and amputations of a Ukrainian in Russian prison | Ukraine and Russia

Abhishek Pratap 3 weeks ago News Comments Off on ‘I was in pieces’: the ordeal of torture and amputations of a Ukrainian in Russian prison | Ukraine and Russia 15 Views

He still wears the clothes he wore when the Russians sent him home—a green military shirt and track pants. He looks pale and gaunt, over 31.

He changes position on the bed. It has been about two weeks since he was last able to stand and has to move his legs regularly to stop the pain.

It’s a clear spring day in Zaporizhzhia, in southern Ukraine, but the Russians are bombing the area and the hospital’s windows are darkened. The air in the ward is hot and dense.

Nikita had been returned to Ukraine just three days earlier as part of a prisoner exchange and taken to this hospital with another man.

They spent three grim weeks in a prison in Russia. The other man, Serhiy Vasylyha, 28, was returned with both feet amputated. “He wasn’t as lucky as I was,” says Nikita.

Prisoner exchanges are being negotiated by Ukraine’s Deputy Prime Minister Iryna Vereshchuk, who confirmed that Nikita was sent back from Russia. “There were people seriously injured in that exchange — amputees, sepsis, other serious injuries,” says Vereshchuk.

“There were clear signs of torture,” she says. “The stories they told us are terrible.”

Nikita, who was a laboratory assistant at a Kiev hospital, was holed up in a cold, damp basement under the garden with his father Sasha, their wives, and Nikita’s five-year-old son. Sasha is Nikita’s stepfather, but they’ve called each other father and son for years.

The Russians were going from house to house and took the two men out of the basement and beat them, Nikita said. “There were shootings, people in the village were being killed, it was terrifying.”

They were blindfolded and taken at gunpoint to what appeared to be a camp, where they were tortured.

Nikita has a recent scar on his finger joint, which he says was caused by a wrench pressed against his knuckles by the Russians. He heard others around him, but he didn’t know how many or who they were.

“All I remember thinking is where is my dad? What if he’s not with me anymore?”

The Russians took off their boots, filled them with water and put them back on. Then the prisoners were forced to lie face down in the camp in the freezing cold.

“We stayed like that for three or four nights, in the rain, getting colder and colder,” remembers Nikita.

When he could no longer hear the Russian soldiers nearby, Nikita asked quietly, “Dad, are you there?” And Sasha’s voice came back calmly. They were together. From that moment on, they would continue talking whenever it felt safe, reassuring each other.

As they stood in the field, a deep chill hit Nikita’s feet. Soon he couldn’t feel them anymore. Then the projectiles began to fall close to them, heralded by shuddering crashes.

“We stayed like this for a long time on the floor, saying goodbye to our lives over and over again,” says Nikita.

Eventually, they were pulled off the ground and loaded onto trucks. Blindfolded, Nikita had trouble judging the length of the trip.

At some point, they were combined with another group of prisoners and loaded onto helicopters. Hunger was setting in — they had only been given a bowl of porridge, a loaf of bread and a biscuit since they were taken, says Nikita.

From the helicopters, they were transferred to a cargo plane. Nikita felt the engines running and the plane speeding down the runway and taking off. He supposed he was with about 10 or 12 other prisoners.

“Are you okay?” he said aloud, over the sound of the engines.

Back in the village, Nikita and Sasha’s wives, Nadia and Svitlana, and Nikita’s son Artem had moved from their basement to a larger shelter in the basement of their neighbor’s house. They had no idea where their husbands were.

A few houses down, Sasha’s parents, Nadia and Volodymyr, were also starting to worry. Sasha had stopped taking his calls, but it was impossible to venture outside to find out if he was safe.

Projectiles rained down around the village, and during the breaks in the bombing, Russian soldiers ransacked the houses. For more than a month, during the occupation, no family knew what was happening to the others in the neighborhood.

At some point, Nikita and Sasha crossed Russian airspace and the cargo plane began to descend. They were taken to a detention camp where their blindfolds were finally removed and they turned around. They hugged.

The Russians also used the wrench on Sasha’s fingers, says Nikita, but even worse, and one of her fingers was dangling from a small amount of tissue and skin. He was taken to a field hospital for treatment.

Nikita could finally see her feet. Her toes had turned black. He knew they were getting severely frozen from the cold and asked for medical attention. At the field hospital, they dried and bandaged his toes, but that was all.

They put their boots back on, and after five days in the camp, the prisoners were transported by truck to Pre-Trial Detention Center Number 1—a prison in the Russian city of Kursk.

The new prisoners were uniformed and had their hair cut. They were told they would be “vaccinated,” which turned out to be a euphemism for beatings, says Nikita.

When he and Sasha were locked in a cell with 10 other people, Nikita already imagined that he might lose both legs.

“That first night, I realized I couldn’t feel or control my feet,” he recalled. “And they started to stink.”

Others were facing the same grim situation. Some would later lose entire limbs.

Prison care was minimal—an antibiotic injection and dressing changes once every three days. According to Nikita, the prison doctor told her, “We have good medicine and medical treatment here, but not for you.”

Prisoners entertained themselves in the cell talking about their families and telling jokes. They were forced to memorize patriotic Russian songs and perform them for guards, Nikita said.

“The anthem of Russia; another disgusting song that glorifies Putin. They gave us the songs in the morning and told us to learn them by lunchtime,” he says.

They were interrogated two or three times a day and beaten, he says. Afterwards, they were required to sign documents declaring that they had been well cared for and fed and that they had not been harmed. That’s how they knew where they were, because the documents were stamped “Kursk Pre-Trial Detention Center 1.”

After three weeks in prison, Nikita’s foot condition worsened dramatically, and he was finally transferred to the hospital with two other people. A surgeon told him he was going to amputate all of his toes.

“They were in such bad condition that during the exam one of my toes just fell off,” says Nikita.

He spent a week in the hospital after the surgery, before an officer told him that he and several other seriously injured men would be sent home “to be taken care of by their families”.

Vereshchuk, the deputy prime minister, says the Russians tried to exchange civilian hostages for Russian military prisoners in Ukraine — a measure prohibited by the Geneva Convention.

“That’s why they took all these hostages — civilians, women, local council officials, to try to use them,” she says.

“We know there are over 1,000 hostages there — including nearly 500 women. We know they are in prisons and pre-trial detention centers in Kursk, in Briansk, in Ryazan, in Rostov.”

Nikita was never taken back to the Kursk prison, where he last saw Sasha. From the hospital, he was loaded once more on a cargo plane, this time to Simferopol, Crimea.

Russian authorities told Vereshchuk they did not have spare ambulances, so seriously injured prisoners were placed in the back of empty trucks for the five-hour journey to the exchange.

At the rendezvous point, the Russians put the wounded on the road onto their stretchers and left, and Ukrainian soldiers came to pick them up.

Nikita still couldn’t believe he was in Ukraine, he says, until one of the soldiers looked him in the eye and said in Ukrainian: “Welcome back, friend.”

But he didn’t know if his family was alive. He didn’t know anything about what had happened in the Ukraine last month. Nikita gave a Ukrainian officer his wife Nadia’s number and waited, his heart pounding in his chest.

“I was just waiting for the dial tone, to at least know her phone was on,” he said. “Then it started dialing and she declined the call, and I knew she was alive.”

On the second attempt, Nadia answered. She told him she was in Belgium with Artem and they were safe.

“For five minutes we just cried on the phone,” says Nikita. “We tried to talk to each other but we couldn’t. There were tears streaming down my face. I just heard her say hello and I couldn’t breathe.”

Nadia called Sasha’s brother Vyacheslav and their parents Nadia and Volodymyr to break the news. But there was still a big chunk missing.

“We know Sasha was alive when Nikita left, but that was two weeks ago,” says his mother. “So, we’re still here waiting. We’re still not okay.”

Since her arrival in Ukraine, Nikita had been trying to arrange a transfer from Zaporizhzhia to the hospital in Kiev, where she worked. The order appeared to be stalled. Then suddenly, on Tuesday morning, a nurse came in to tell him he was going home.

After a long ambulance ride across the country, Nikita was greeted like a hero by his colleagues at Kiev Civil Hospital No. 5. He was taken to a private room with a large open window overlooking the pine trees.

The chief of medicine and the chief surgeon came to visit him. They were nervously waiting for news from Nikita, and both were in tears for her return. Two of his other colleagues, a couple, had recently been killed with their children by a Russian shell.

“It means everything for us to have him back,” says surgeon Yuriy Shylenko. “He’s going to need to relearn how to walk, but we’ll do anything for him.”

Nikita puts on a pair of hospital slippers and shows her progress by standing up and taking a few steps. The doctors talk about her recovery plans. But he wasn’t really listening.

“I only have one thing on my mind,” he says, after they’ve left. “Back to my wife and child.”