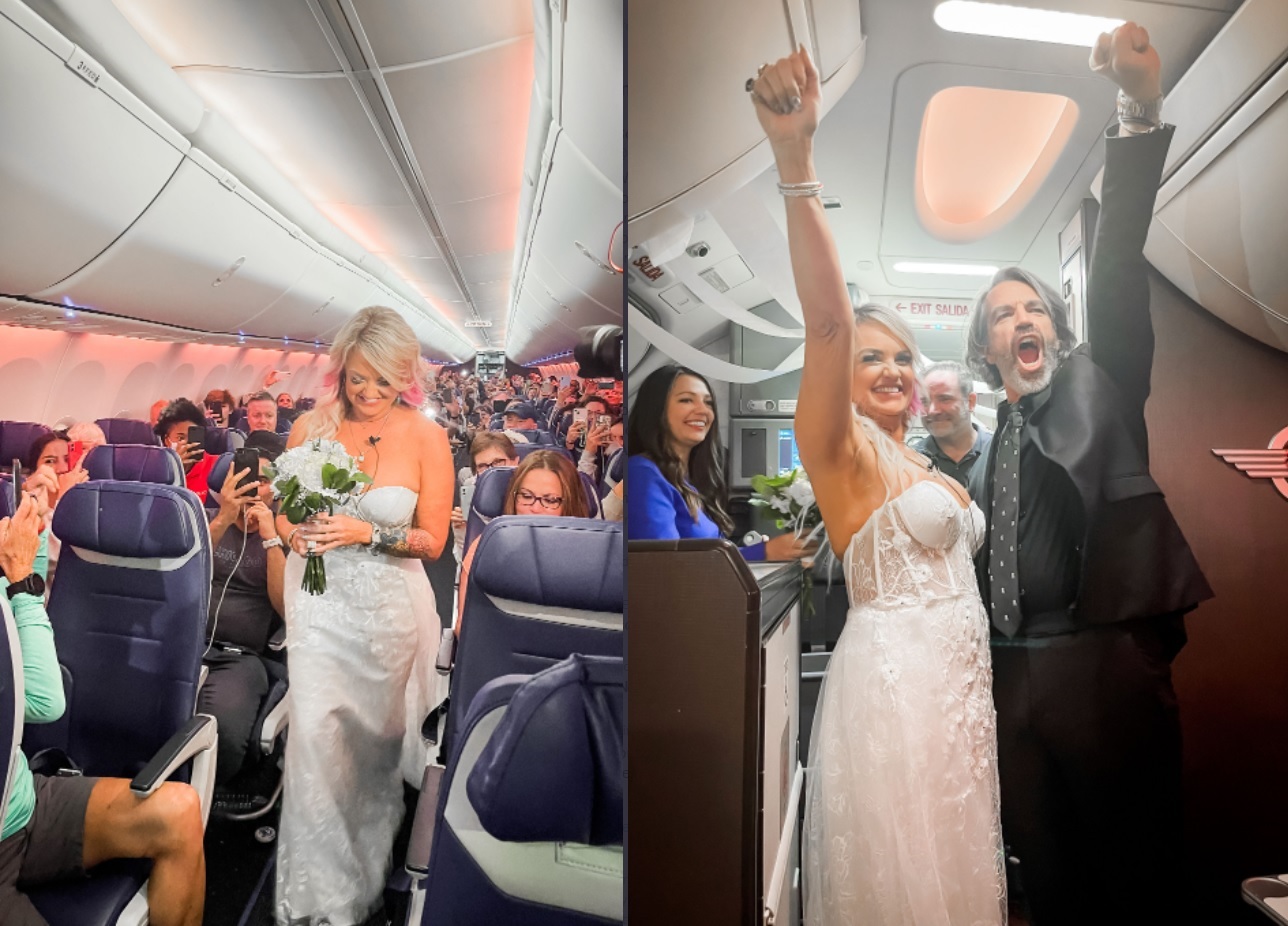 After going through the disappointment of having a canceled flight as they prepared for the last leg of their journey towards the destination where they would celebrate their union, a couple ended up surprised to win a wedding in the middle of a commercial flight.

Pam and Jeremy were traveling to get married in Las Vegas when their last leg between Dallas Forth Worth (DFW) and Las Vegas (LAS) airports was cancelled. Little did they know that their luck was about to change.

At the gate in DFW, the couple met Chris, another passenger on their canceled flight to LAS. Chris overheard Pam and Jeremy commenting that they would likely miss their wedding chapel engagement in Las Vegas that night.

There began the first coincidence of fate. Chris was also an ordained minister, and offered to marry the couple.

The three accessed the internet, bought the last available seats for LAS on a Southwest flight, but still had to cross the city, as the departure was through another Dallas airport, Love Field (DAL).

As they were boarding the new flight, Captain Gil asked Pam about her wedding dress, as she and Jeremy had decided to travel in full wedding attire, just for fun.

Pam explained her story to the captain and joked with him that they should get married on this Southwest flight. For the second time that week, the newlyweds were surprised and ecstatic to hear the words “Let’s do it!”.

The flight crew sprang into action. They hung up toilet paper simulating decorative ribbons, made a banner of snack packets for Minister Chris and, even before takeoff, downloaded a complete wedding soundtrack. Julie, one of the flight attendants, played the role of bridesmaid.

But it wasn’t just the crew that could help. There was still a professional photographer on the flight, who grabbed her camera for official wedding photos.

Another passenger had the idea of ​​passing a notebook that everyone on board could sign with their seat numbers and best wishes, given to the newlyweds as a makeshift guest book. Next, the image of the notebook and a video of the celebration on board (wait for it to load if the video does not appear immediately).

Remember Chris, the ordained minister? Turns out he also works in broadcasting and was carrying on his A/V equipment from him! Needless to say, this special moment was captured for Pam and Jeremy to cherish forever. 🥰 pic.twitter.com/hv6aGBskSm

Remember Chris, the ordained minister? Turns out he also works in broadcasting and was carrying his audio and video equipment, so the special moment was captured for Pam and Jeremy to cherish forever.

“Congratulations to the newlyweds for a truly special onboard wedding that neither our Employees nor our Customers will be able to forget! We can’t wait to welcome you aboard for your next adventure on the airline of love.”