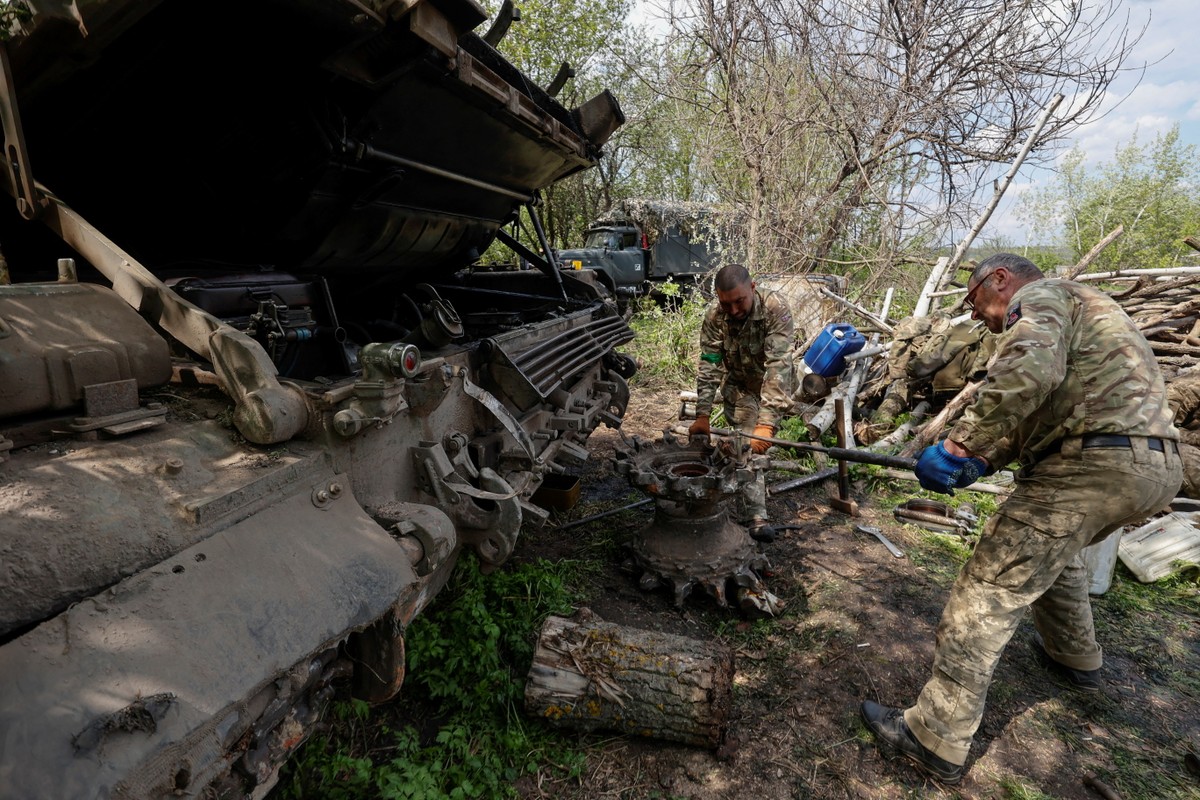 Russian forces in Ukraine introduced the ruble as a currency in the Kherson city region on Sunday, although it also allows payment with Ukrainian currency. The Russians seek to establish dominance in regions that the army has already dominated.

It was Kirill Stremousov, who governs Kherson, who announced that the city would be “integrated into the ruble zone”, according to Russian state news agency RIA Novosti.

He announced a four-month period during which Ukrainian currency can be used, but after that there will be a complete switch to the ruble.

Ukraine has acknowledged that Russian forces have captured several towns in the Donbass region and is asking the West for more military help to bolster its defenses.

An area of ​​the Russian Defense Ministry in the Belgorod region, close to the border with Ukraine, suffered a fire, which left one injured, according to the local government.

At this point in the war, the conflict is concentrated in eastern and southern Ukraine, although Russian bombing continues across the country, mainly with the aim of destroying infrastructure and supply routes.

For the Russians, the total conquest of the port city of Mariupol would make it possible to unite the territories conquered in the south, in particular the Crimean peninsula, annexed in 2014, with the pro-Russian breakaway republics of Donetsk and Lugansk, to the east (see more about Mariupol). below).

On the eastern flank the Russian army is numerically superior to the Ukrainian adversary and has better artillery equipment.

Ukrainian President Volodymyr Zelensky said on Saturday that the Russians had “accumulated reinforcements in the Kharkiv region, trying to increase pressure on the Donbass”.

This is the second phase of what Russia calls a “special military operation”, following the withdrawal of Moscow troops from northern Ukraine and the Kiev region.

A Ukrainian military commander told US Joint Chiefs of Staff Mark Milley about the “difficult situation in the east, particularly in the areas of Izium and Sieverodonetsk, where the enemy has concentrated maximum efforts”.

Kharkiv was the scene of many bombings on Saturday. Ukrainian forces have also reconquered territory in recent days, particularly around the city.

One of the areas recovered was the village of Ruska Lozova, which according to residents remained under occupation for two months.

Civilians were evacuated from Mariupol

British intelligence points out that Russia is regrouping troops in Ukraine

Nearly 100 civilians were evacuated from the Azovstal steelworks complex, which is used as the last stronghold of Ukrainian forces in the city of Mariupol.

The site also houses civilians who have taken refuge there. The departure of a part of them was announced this Sunday (1st) by President Volodymyr Zelensky.

The UN confirmed that a “withdrawal operation was under way” in Azovstal, in coordination with the Red Cross, Russian troops and Ukrainian forces, without revealing further details.

Civilians leaving the area of ​​the Azovstal steelworks in Mariupol walk accompanied by a member of the International Committee of the Red Cross (ICRC) — Photo: Alexander Ermochenko/Reuters

Mariupol, in the south of the country, which is controlled by Russia, the only area that is still under Ukrainian control is the steel mill.

Living conditions in the tunnel network beneath the steel mill were described as brutal. Analysts believe hundreds of civilians remain alongside Ukrainian fighters at the compound. Previous efforts to evacuate civilians had failed.

Zelensky said that on Monday he will meet with the first civilians who were evacuated from Azovstal in Zaporizhzhia.

The Russian Defense Ministry said 46 civilians had left the scene on Saturday in two groups.

Pope Francis made mentions of Mariupol this Sunday. “My thoughts are with the Ukrainian city of Mariupol, city of Mary, which was bombed and destroyed in a barbaric way. I reiterate my call for the opening of safe humanitarian corridors,” he said at the Vatican.

Satellite images from the American company Maxar recorded on Friday show the devastation in Mariupol, with Azovstal practically destroyed.

The invasion initiated by Russia on February 24 left thousands dead and millions displaced. Western countries and their allies mobilized to deliver war aid to Ukraine and adopted tough sanctions against Russia.

“Don’t be intimidated by bullies,” US House of Representatives Speaker Nancy Pelosi said in an interview in Poland after visiting Ukraine on Saturday, where she met with President Zelensky.

Pelosi holds the third most important representative office in the United States, after the president and vice president. She expressed her country’s unequivocal solidarity with Ukraine.

“The United States government is a leader in solid support for Ukraine in the fight against Russian aggression,” the Ukrainian president said in a message that includes a video showing him as he greeted Pelosi and the congressional delegation at the entrance to the seat of the presidency in Kiev.

Zelensky welcomed the “very important signals” presented by the United States and President Joe Biden, who on Thursday asked Congress for an additional $33 billion for Ukraine, of which $20 billion will go to weapons, nearly seven times as much. than the amount of arms and ammunition already supplied to Ukraine since the beginning of the Russian invasion.

Pelosi promised that she will work towards the approval of the proposal.

Food maven. Unapologetic travel fanatic. MCU's fan. Infuriatingly humble creator. Award-winning pop culture ninja.
Previous Learn how to eliminate mold once and for all from your home, see tips
Next How the legend of Ukrainian pilot ‘Ghost of Kiev’ was born