Raju Singh 2 weeks ago Technology Comments Off on Top 10: AnTuTu elects the most powerful cell phones released in April 18 Views

AnTuTu released on Sunday (1st), the new list that evaluates the most powerful devices launched by brands during the month of April. The evaluation is based on benchmark tests carried out by users in different categories of devices, mainly covering the mid-range and high-end versions.

As in the March ranking, most of the chipsets that performed better belong to Qualcomm, with the exception of MediaTek’s Dimensity 8100 and 9000, which stood out when compared to smartphones equipped with processors of recent generations, such as the Snapdragon 8 Gen. 1 and SD 870, for example.

Manufacturers such as Samsung and Huawei did not announce new phones last month, so they do not appear in the list for the month of April. Despite this, important names such as Redmi, iQOO, OPPO and Xiaomi stood out both for the result achieved and for the number of devices.

The platform considers performance in four parameters for the ranking: CPU, GPU, memory and user interface. Check below the ranking of the most powerful cell phones launched in April (according to AnTuTu)!

As we anticipated, MediaTek managed to stand out in the last month, occupying the first two positions in the ranking of the most powerful smartphones launched in April. The manufacturer achieved this feat through the Dimensity 8100, octa-core up to 2.85 GHz with 5 nm lithography, which equips the Redmi K50 and realme GT Neo 3, respectively.

The Redmi K50 scored 814,032 while its rival scored 811,881. Although there is a considerable difference, this number is on the margin and puts both models at equivalent levels of performance with a score above 800 thousand, an expected result for devices in this category. 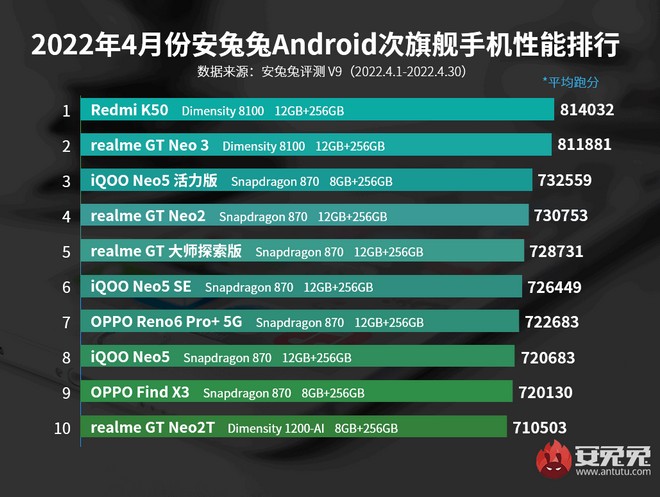 The huge difference is when we compare the gains of the Dimensity 8100 with the Snapdragon 870, a processor that powers all eight places that are below the leaders. Overall, the disparity in values ​​is close to 80 thousand points suggesting optimizations by the Taiwanese company in its SOC.

Led by the Black Shark 5 Pro with 1,062,747 points, the list of the most powerful devices in April has, for the most part, cell phones equipped with the Snapdragon 8 Gen 1 chipset, octa-core platform up to 3 GHz with a manufacturing process of 4 nm which is Qualcomm’s most powerful model.

The second place is occupied by the Nubia Red Magic 7 Pro with 1,032,494 points, followed by the Lenovo Legion Y90 with 1,023,934 points closing the first three positions. In fourth place is the vivo X80, the only smartphone in this category equipped with a MediaTek chipset, in this case the Dimensity 9000. Do you want to buy a model listed in AnTuTu’s top 10? Tell us, comment!

Raju has an exquisite taste. For him, video games are more than entertainment and he likes to discuss forms and art.
Previous POCO Watch is the brand’s first smart watch with AMOLED screen – All in Technology
Next Google launches 3 new courses with professional certificates