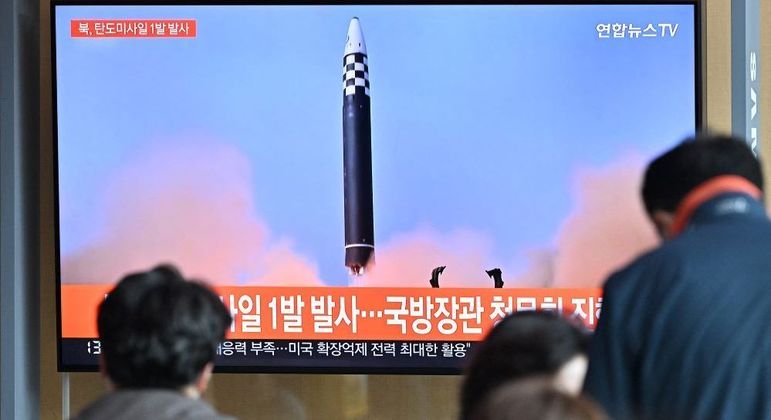 Since the beginning of the year, Pyongyang has carried out 14 weapons tests, which included the first launch of an intercontinental ballistic missile since 2017.

“We detected a ballistic missile launched by North Korea at 12:03 (0:03 GMT) from the Sunan area” on the outskirts of Pyongyang towards the Sea of ​​Japan, South Korea’s Joint Chiefs of Staff said in a statement.

The missile traveled 470 km and reached a maximum altitude of 780 km, said the military body, which denounced a “flagrant violation of United Nations Security Council resolutions”.

Japanese Defense Minister Makoto Oniki confirmed the launch and trajectory. He denounced that the “repeated launches of ballistic missiles threaten the peace and security of the nation, the region and the international community”.

Despite international sanctions against the nuclear and weapons program, North Korea has announced that it intends to modernize its arsenal and has tested several recently banned projectiles.

The country also resumed the intercontinental missile program which, alongside the nuclear weapons program, remained stagnant during the attempt to negotiate with former US President Donald Trump, which failed in 2019 and has been stalled since then.

North Korean leader Kim Jong Un warned on Saturday that he could “preventively” use the country’s arsenal, which includes nuclear weapons, to counter threatening actions by hostile countries.

During a military parade last week, Kim defended the need to build up the “nuclear force at the greatest possible speed”.

“The nuclear forces, symbol of our national strength and the axis of military power, must be strengthened in terms of quality and scale,” he declared, according to state media.

“There’s a good chance they fired a missile that could be equipped with atomic warheads,” said Ahn Chan-il, a professor of North Korean studies.

The test took place a few days before the inauguration, next Tuesday (10), of the elected president of South Korea, Yoon Suk-yeol, who promised a firmer stance against the North and even mentioned the possibility of a preemptive strike. against Pyongyang.

“This could be a warning message to Yoon,” said Hong Ming of the Korea Institute for National Unification.

The president-elect said he would participate in peace talks if Pyongyang confirms its willingness to carry out denuclearization, something the North will never accept, explains Hong Min.

“It could also signal Pyongyang’s stance that it has no alternative to improving its arsenal if Seoul and Washington decide to mobilize strategic military assets in the South,” he added.

For five years, outgoing South Korean President Moon Jae-in has tried to bring closer ties with the North and managed to organize two meetings between Kim and Trump, while reducing military exercises with the United States, considered a provocation. by the North Korean regime.

But successor Yoon argues that the “servile” strategy is a mistake. He advocates the installation of more American air defense systems — including tactical nuclear weapons — and more military exercises.

Shortly after taking office, still in May, Yoon will receive a visit in Seoul from US President Joe Biden.

Other analysts link the high number of tests to the current paralysis at the UN Security Council, where tensions between Russia and the United States over Ukraine make it “virtually impossible” for them to pass new sanctions against Pyongyang.

“The North will therefore try to test as many missiles as possible, which it has not been able to launch until now, to improve the capabilities of its arsenal at rapid speed,” said Cheong Seong-chang of the North Korean Studies Center. , from the Sejong Institute.