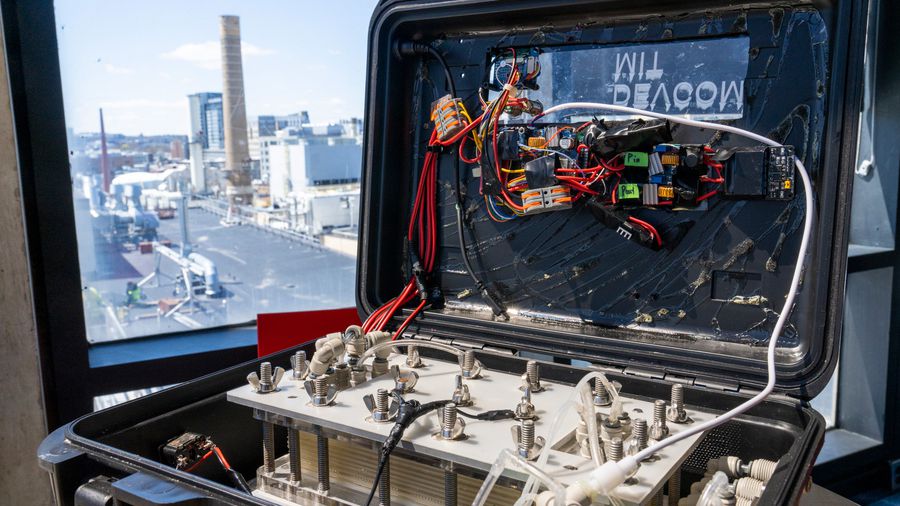 Revolutionary desalinator purifies water at the push of a button

Researchers at MIT, in the USA, have developed a portable equipment that desalinates and purifies water without the need for conventional filters or high-pressure pumps. The suitcase-sized device weighs approximately 10 kg and requires less power than a cell phone charger to operate.

According to engineers, unlike other portable desalination units that require water to pass through filter elements, this innovative device uses only electrical energy to remove salts and polluting particles suspended in the water.

“Our invention automatically generates drinking water above World Health Organization quality standards. In addition, this technology can be packaged into a user-friendly device that works with a simple push of a button,” explains electrical engineering professor Jongyoon Han, lead author of the study.

Instead of a high-pressure pump that pushes water through filters, the equipment developed at MIT relies on a technique known as ion concentration polarization — ICP — which applies an electric field to membranes placed above. and below a water channel.

These special membranes repel positively or negatively charged particles — including salt molecules, bacteria and viruses — as they pass through the device. The process removes these dissolved and suspended solids, allowing only clean water to pass through the channel.

“As the ICP does not always remove all the salts floating in the middle of the channel, we incorporated a second process – known as electrodialysis – to remove the remaining salt ions in the system. Although some charged particles can be captured by the ion exchange membrane, just reverse the polarity of the electric field and the charged particles are easily removed,” explains Han.

The device is designed to be used by anyone, with just the press of a single button to start the desalination and purification process. When the salinity level and the number of polluting particles decrease to specific limits, the equipment notifies the user that the water is potable and can now be consumed without risk.

This first prototype manages to generate approximately half a liter of drinking water per hour, using about 20 watts of electrical energy per liter. The idea now is to expand this production rate for applications in larger distribution networks, in addition to further reducing electricity consumption.

“This technology can be deployed in remote areas with severely limited resources, such as communities on small islands or aboard cargo ships. On a larger scale, it could also be used to help people fleeing natural disasters or by soldiers carrying out long-term military operations,” concludes Professor Jongyoon Han.