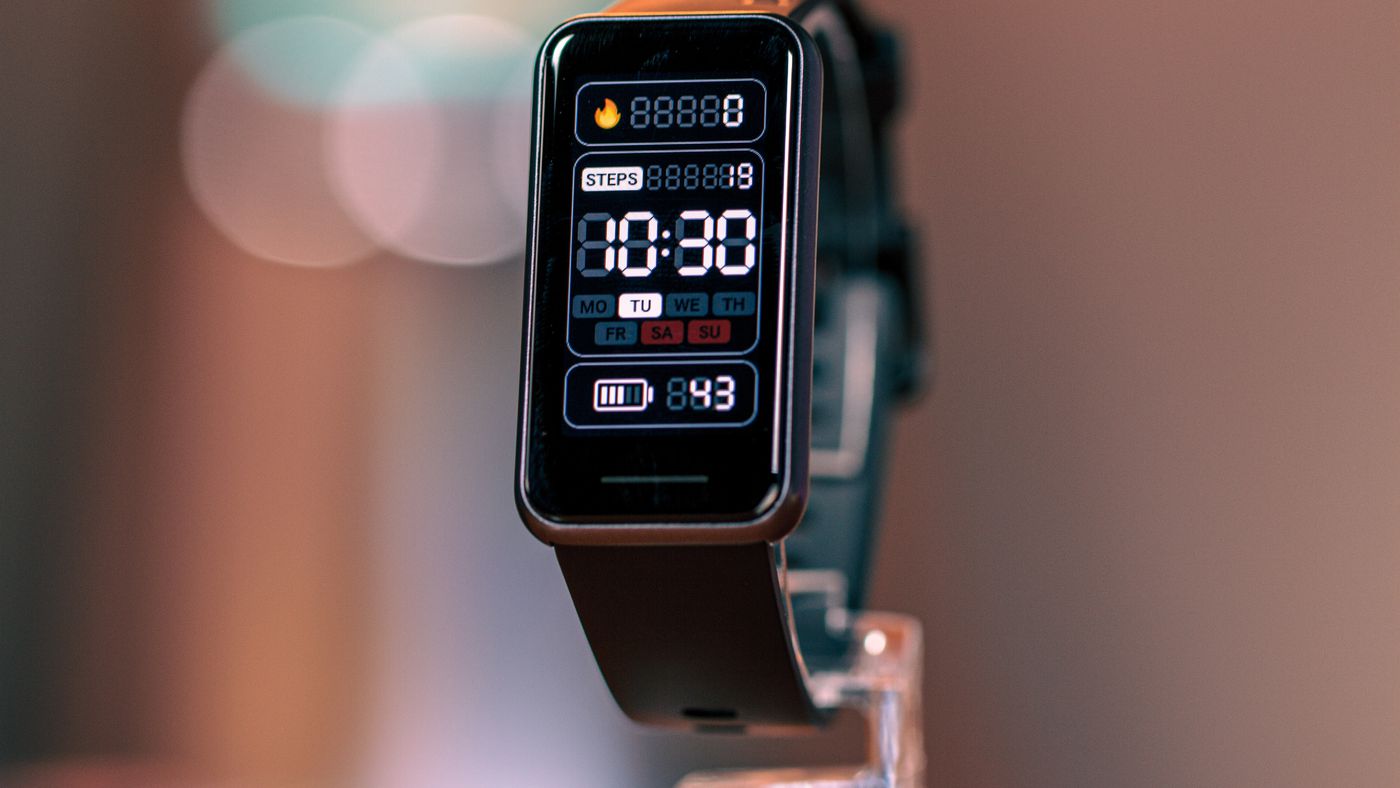 Realme Band 2 is the Chinese debut in the smart bracelet segment in Brazil. It has a 1.4-inch screen with 500 nits of brightness, up to 12 days of battery life, up to 90 training modes and continuous heart rate monitoring.

Is it worth it in a market dominated by smartbands from Xiaomi, Samsung and Huawei? I tested the Realme Band 2 for a few days and I tell you all my impressions in the next paragraphs!

As an evolution of the first generation, the Realme Band 2 brought a more robust design, but which unfortunately lost the elegance and compactness of the first model. The box had to grow to accommodate the larger screen, new sensors, and larger capacity battery.

While the smartband received a larger body, its all-plastic construction made it look more basic than it is. Not only because of the choice of material for the core, but also because of the bracelet that appeared to be very fragile and uncomfortable.

On the wrist, at least, the Realme Band 2 didn’t bother me as much as other bracelets I’ve tested, and here I put some Fitbits and even the Mi Band 6. It’s firm and luckily it didn’t irritate my skin during the period I wore it, which which I consider a very positive point.

The good news is that the strap is removable and you can swap it for any other strap on the market that is 18 mm. Realme itself sells many options, but they did not come to Brazil.

As we are talking about a product that monitors physical activities, the Realme Band 2 is waterproof, supporting dives of up to 50 meters in depth. That is, one of its sports modes include swimming.

The sides of the bracelet are rounded and do not have any physical buttons. Even the first contact with it was strange because, first, it was necessary to fully charge it to connect it. After that, however, everything went very well.

Realme Band 2 is equipped with a 1.4 inch screen with a resolution of 167 by 320 pixels and LCD technology. It’s a pretty basic panel, so in addition to more washed out colors compared to other bracelets, there’s no auto-brightness.

For me, automatic brightness was one of the main absences of the smartband because it turned out to be inconvenient to dim the brightness in dark environments, such as at bedtime. And even at the weakest level, it bothered me at times.

A good thing about all this is that, in very sunny environments, the brightness of 500 nits does the trick, being possible to view all the information on the bracelet without problems.

In addition, even bringing a larger screen compared to the previous generation, the front use is not the best, and this ended up resulting in a considerably larger box for the display. I think it would be possible to enlarge the screen a little more.

As I mentioned above, there is no physical button on the Realme Band 6, so the screen is touch sensitive. It felt very responsive to me, although the interface didn’t help the experience much.

The Realme Band 2 is a smart bracelet for around R$300, so I no longer expected a performance as fluid as the Mi Band, for example. It doesn’t have an independent operating system either, being mandatory to connect to a smartphone, be it Android or iPhone.

The app through which you synchronize your smartphone with the bracelet, in addition to seeing all the settings and sensor reports, is Realme Link. It is simple, but it shows all the smartband customization options in an easy way, and the connection process is also common.

The only problem — and the most annoying — I had with it was accessing the bracelet’s face gallery. Realme provides numerous options for you to customize it, but the software always showed an error message.

During the period when I used the Realme Band 2, unfortunately I was not able to see all the available face options, having to resort to some available on the bracelet itself.

The smartband interface is also not the best I’ve ever used. It’s not fluid at all, so even with the screen’s responsiveness, the commands are very dragging and time-consuming. The font, icons and windows aren’t very pretty either. It’s all very simple, even too much for my taste.

Apart from all that, the Realme Band 2 fulfills its role as a basic smart bracelet: it can control your cell phone’s music playback, serve as a remote control to take photos, create alarms, timers, view messages, but not respond them, and control other Realme IoT devices.

Everything worked minimally well thanks to the Bluetooth 5.1 connection, which never let my cell phone and the Realme Band 2 disconnect. Oh, and speaking of connectivity, it is compatible with Android system from version 5.1, in addition to iOS 11 or later versions.

Realme Band 2 supports up to 90 sport modes including running, walking, swimming, weight training, basketball, yoga, football, rowing, elliptical and spinning. Realme says that all sports will be included in the future via update.

Even though it is a basic bracelet, the Realme Band 2 even has a very interesting sensor kit. The GH3011 sensor is present to monitor heart rate continuously, not to mention measuring blood oxygen levels, stress, sleep quality and steps.

In physical activities, the bracelet was very accurate and I noticed that it managed to register correctly – or at least almost – most exercises, especially the external ones. In the interns, the results were a little more superficial, always throwing the beats down.

Regarding the oximeter, I can’t say if the bracelet does a good job, as I couldn’t compare with the finger oximeter. But here’s the warning: in case the record is much lower than normal, look for a doctor.

Sleep and stress monitoring were also great. The first proved to be very accurate during the nights, efficiently recording the duration of light, deep and REM sleep. The stress analysis also turned out to be accurate, although I barely stirred.

One of the highlights of the Realme Band 2 is its battery life of up to 12 days. Of course, the total duration depends on how you wear the bracelet, how many exercises you log, how often the heart rate monitor works.

In my tests, recording workouts once a day and monitoring heart rate continuously every 10 minutes, the Realme Band 2 went from 100% to 11% in five days.

Of course, it was far from the 12 days promised by Realme, but I considered it a good autonomy because I didn’t worry about being without it at any time. Much of this was due to the relatively fast charging, approximately one hour.

During the tests, it was enough to recharge it for 20 minutes during the bath and that’s it, the bracelet will never let you down.

In this price range, it is already possible to find much more competent models already known in the Brazilian market, such as the Samsung Ggalaxy fit 2 and the Huawei Band 6.

We’ve already analyzed Samsung’s smart bracelet and we’re particularly interested in the battery life of up to 21 days, in addition to the greater integration with Samsung cell phones. Its price is around R$ 340.

Regarding the Huawei Band 6, my colleague Rudy Caro called it one of the best smartbands of the moment. Also costing around R$330, it offers an AMOLED screen, much superior to the LCD of the Realme Band 6, great performance and advanced health monitoring features.

Is it worth buying the Realme Band 2?

Realme Band 2 is a very basic smartband, but it performs its functions very well. The sensors are accurate, the battery lasts well in moderate use, the exercise options are vast, and the screen brightness is pretty high.

And I would even recommend the Realme Band 2 if it really bought into the idea of ​​being simple and costing less. It arrived in Brazil for R$449 and, even with a considerable price drop, which can cost R$300, other smartbands available in Brazil deliver much more costing the equivalent, such as the Huawei Band 6 and Galaxy Fit 2

Auto brightness, for example, is an almost mandatory function on a smartband, and the Realme Band 2 doesn’t have it.

The wristband interface could also be a little better crafted, and not looking like an illegitimate product. It’s these details that took me away from the Realme product. But when, or if, it costs R$200, it can be a good option.

Raju has an exquisite taste. For him, video games are more than entertainment and he likes to discuss forms and art.
Previous Ministry says Russia tested nuclear-capable missile launch | Ukraine and Russia
Next Sleep hygiene: learn to create a routine throughout the day to sleep well – 05/05/2022 – Mental Health