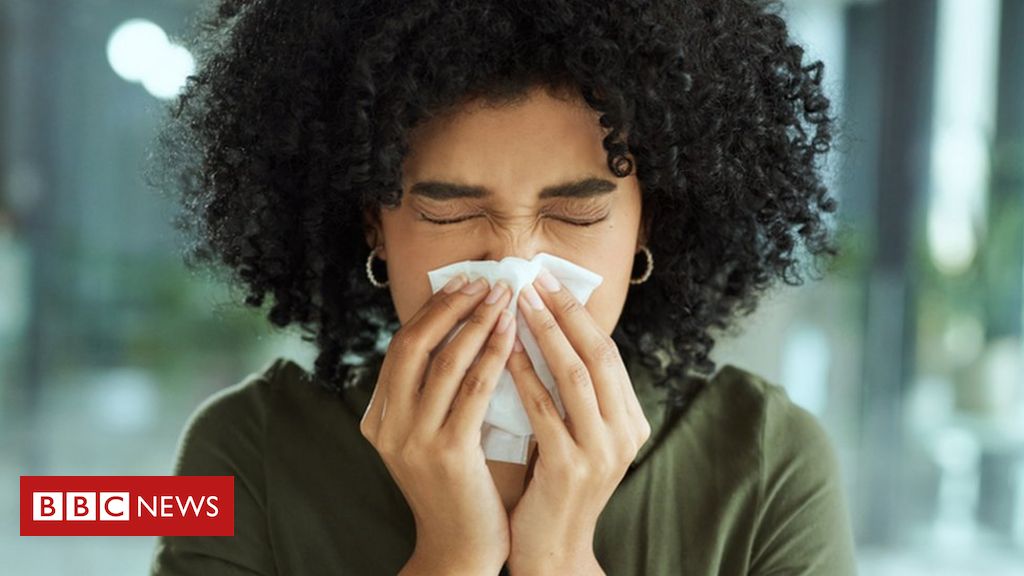 Rhinitis: why there is no cure and how to treat stuffy nose and sneezing

Jenni Smith 2 weeks ago Health Comments Off on Rhinitis: why there is no cure and how to treat stuffy nose and sneezing 5 Views

“What does it cost to get three guys together in a laboratory and find a cure for rhinitis?”

What seemed to be a humorous outburst by João Zastrow, a Twitter user, turned into a real and thought-provoking doubt about a disease that affects up to 40% of the world’s population (or about 84 million Brazilians) — the post on social media has already had more than 165 thousand likes and 43 thousand shares.

Allergic rhinitis, a condition marked by a stuffy nose, repeated sneezing, itchy face and difficulty breathing, usually worsens in autumn or winter and is related to some environmental triggers, such as dust, pet hair, mites and pollen.

While the treatment has come a long way in the last two or three decades, the truth is that there really is no cure for rhinitis — and many scientists believe that we will never see a definitive solution to this problem.

Next, you will understand what the causes are usually, why it is so difficult to talk about a cure for this disease and what are the main ways to control the condition today.

The nose works as a true filter of our respiratory system. It has several structures and mechanisms to stop the entry of dangerous particles, which can harm the functioning of the lungs.

Let’s take a practical example: imagine that a virus tries to invade your nostrils. The organism will do everything to expel it as soon as possible, in order to avoid bigger problems.

In this situation, the defense system triggers a series of actions, generically called the inflammatory process, to annihilate the invader — that’s why the nose becomes swollen, full of secretions and does not stop sneezing. Mucus is generated as a way to engulf and expel the invader.

“The problem is that, in allergic rhinitis, this reaction happens to substances that are not harmful”, differentiates the otorhinolaryngologist Márcio Salmito, from the Hospital Alemão Oswaldo Cruz, in São Paulo.

That is: the individual with this condition inhales particles of a compound that causes an allergy in him. In rhinitis, the most common allergens are dust mites (microscopic arthropods that live in the mattress and pillow), pet dander, plant pollen or dust.

These compounds are enough to trigger an exaggerated response from the defense system, which triggers that series of typical reactions we described above.

“And this whole process is usually even worse in autumn and winter, when we stay indoors, in frequent contact with allergens”, says allergist Jane da Silva, who integrates the Scientific Department of Rhinitis of the Brazilian Association of Allergy and Immunology (Asbai).

“To complete, the dry weather of these seasons makes the nasal mucosa more vulnerable, which interferes with the filtering capacity”, points out the doctor, who is also a professor at the Department of Internal Medicine at the Federal University of Santa Catarina.

But if science already knows in detail what is behind rhinitis, why is there still no cure for it?

Doctor Antonio Condino, from the Department of Immunology at the Institute of Biomedical Sciences at the University of São Paulo, explains that the immune reaction behind rhinitis is very complex and recruits different types of cells.

“One of the white blood cells that is involved in this process is the mast cell, which releases a substance called histamine”, he exemplifies. This histamine, by the way, is one of those responsible for symptoms such as itching and redness.

Another defense cell involved is the basophil, which releases chemicals that contribute to the inflammatory process.

In other words, there is no single target that, when turned off or inhibited, will definitively prevent sneezing and difficulty breathing.

Condino also teaches that rhinitis is a polygenic disease, which is related to mutations in different parts of the human genetic code.

“There are some immunological diseases that are monogenic, caused by alterations in a single gene. In these cases, it is easier to think of gene therapies capable of dealing with the problem”, he says.

With the scientific and technological advances of the moment, however, it is not possible to “fix” so many genes behind rhinitis at once.

In addition to the technical obstacles, we cannot ignore how difficult it is to create a new drug. To give you an idea, the process of developing a new drug takes 12 years and involves an average investment of 2.5 billion dollars. pharmacies.

Still in this area, we must also bear in mind that rhinitis is not usually a priority in research investments, since we are talking about a disease that does not usually lead to serious or life-threatening conditions.

But the fact that the cure for allergic rhinitis is something practically utopian these days does not mean that patients are left to fend for themselves.

Available treatments, which have advanced significantly in recent decades, can keep seizures under control most of the time, as you can see below.

After diagnosis, the first fundamental step to control rhinitis attacks is to make some modifications at home.

“It is necessary to ventilate the room well, do regular cleaning, change sheets once a week and avoid carpets, rugs, stuffed animals and cloth curtains”, recommends Silva.

It is also worth putting the pillow and mattress in the sun from time to time and washing clothes, blankets and comforters that are stored in the closet for a long time before using them.

All these attitudes have a common goal: to control the accumulation of substances that cause allergies, such as dust, mites and animal hair. This care must be redoubled in the bedroom, as we spend at least a third of our day in this environment.

Cleaning, of course, is not limited to the house: it is also necessary to wash the nose. “Doing a daily cleaning of the nostrils with saline helps to eliminate impurities and hydrate the mucosa, which prevents irritation”, adds the allergist.

In addition to controlling the environment, doctors also usually prescribe some medications, depending on the degree of rhinitis and the frequency of attacks.

“For patients who only have allergic rhinitis in the spring, for example, we can recommend medication to relieve symptoms only at this time of year”, says Salmito.

As for the situations in which the rhinitis is more severe or appears in any month, it is not enough to just put out the fire. In such cases, doctors try to act preventively.

“In these cases, anti-inflammatory drugs of the corticoid class can help”, cites the otolaryngologist.

“The good news is that these drugs have evolved a lot in the last 20 years and today we have options applied directly to the nose, which are not absorbed by the rest of the body and cause fewer side effects”, he adds.

A ‘vaccine’ for rhinitis?

In short, this treatment is carried out over three to five years and offers the patient increasing doses of the substance that causes the allergic reaction in him.

If the person has rhinitis caused by mites, for example, specialists produce injections or pills with a minimal amount of the agent that triggers the attacks. This amount will increase step by step.

“The objective is to gradually modify the immune response, in such a way that the person loses that sensitivity he had when he was exposed to the allergen”, explains Silva. It’s as if the body gets used to it little by little and doesn’t react so badly to that substance.

The effectiveness of this option, however, varies from individual to individual. “About 30% of patients have an almost total resolution of the condition they present. Others improve significantly”, calculates Salmito.

“The perspective is that this technique will evolve a lot over the next few years and increase this success rate progressively”, completes the specialist.

Another negative point of immunotherapy is its accessibility: in Brazil, it is only available in private clinics and is not part of the coverage of health plans.

In the public system, it is only possible to find a few services that offer the “rhinitis vaccine”, linked to research groups and university hospitals.

Control of the environment, antiallergics, anti-inflammatories and the “vaccine” itself may not even represent a cure. But at least they bring a great possibility to control allergic rhinitis — and avoid the painful seasons of stuffy nose.

She's our PC girl, so anything is up to her. She is also responsible for the videos of Play Crazy Game, as well as giving a leg in the news.
Previous Slimming Menus: understand how the weight loss plan works – 05/05/2022
Next Google Assistant adopts new responses to combat user insults; understand what changes | Technology