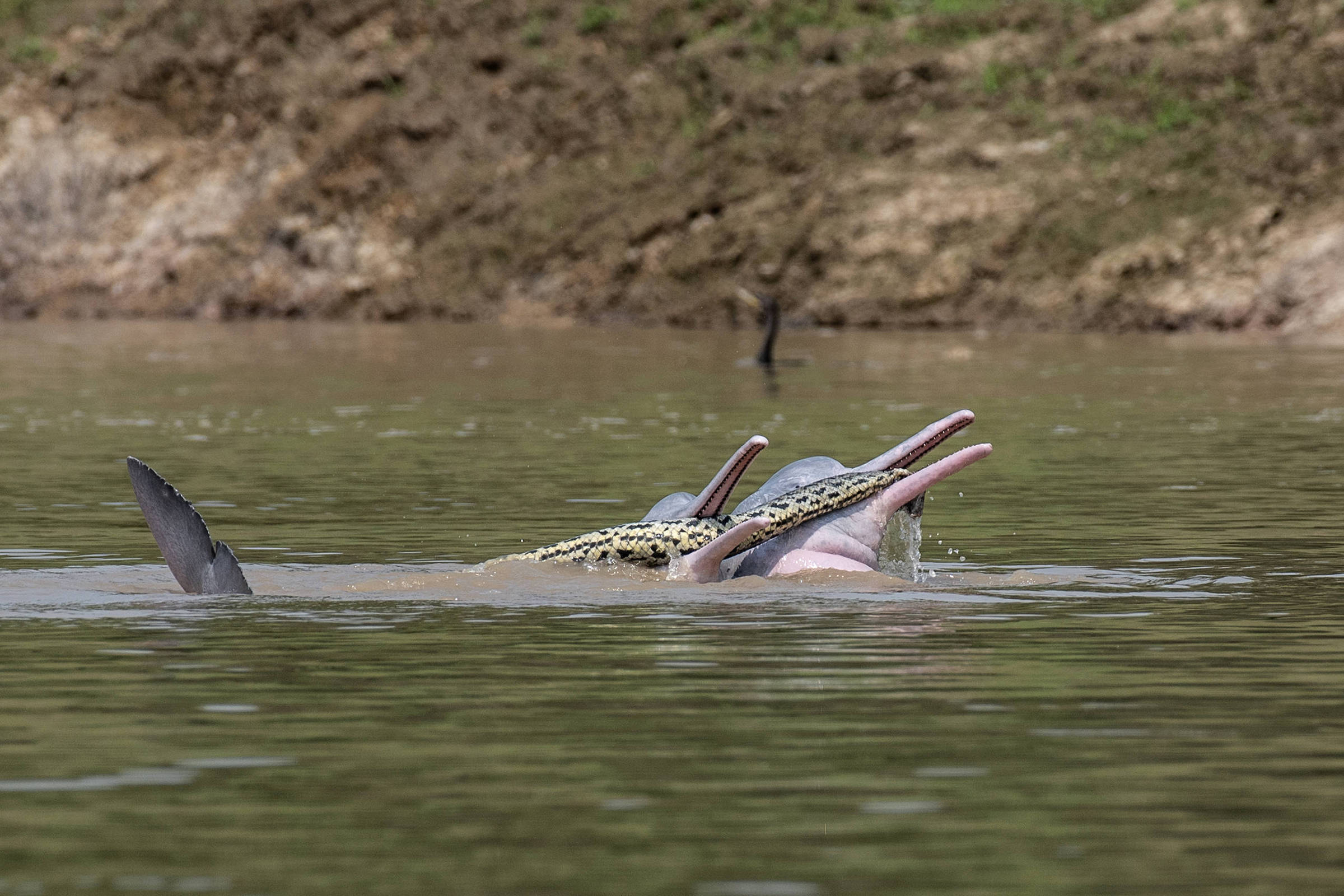 In August 2021 a team of scientists was documenting biodiversity near the Tijamuchi River in Bolivia when they spotted some normally difficult animals to observe: Bolivian porpoises.

Just seeing the dolphins with their heads above the surface was already extraordinary, commented a member of the team, biologist Steffen Reichle, from the Noel Kempff Mercado Natural History Museum in Santa Cruz de la Sierra, Bolivia. Scientists noticed that something unusual was happening and started taking pictures.

It was only after taking a closer look at the photos taken by the team that the scientists realized the porpoises were swimming with an anaconda dangling from their mouths.

The researchers described what they saw in the journal Ecology last month. Dolphins living in captivity and in the wild are known for being playful, but the surprising behavior of Bolivian cetaceans appeared to have reached new heights in play among aquatic mammals, and some scientists are still unsure how to interpret what the team observed.

Reichle said that Bolivian porpoises normally swim under the surface, so much so that usually only a fin or tail is seen. But some of the six animals they saw kept their heads above the murky water of the river for an unusual amount of time.

At one point, two male porpoises appeared to swim in sync, holding a snake in their mouths. Anacondas are semiaquatic snakes and can hold their breath for quite some time. But because this anaconda was handled by the porpoises for at least seven minutes, much of that time submerged, it is likely that she died.

“I don’t think the snake had much fun,” Reichle said.

Because of how long the interaction lasted, scientists think it was a game, not predation. Bolivian anacondas are super predators. With the exception of a single case of cannibalism, scientists have never documented occasions when this snake was eaten. In this case, the scientists didn’t see what ended up happening to the anaconda.

Considering how playful dolphins are, it seems likely that it was a prank, said taxonomist Omar Entiauspe Neto, from the Federal University of Rio Grande do Sul and one of the authors of the paper.

Some of the dolphins gathered were young, a fact that may suggest another dimension of the interaction: the adults could be teaching the young about anacondas or showing them a hunting technique.

But behavioral ecologist Sonja Wild of the Max Planck Institute for Animal Behavior in Germany, who was not involved in the study, doubted the interaction was intentionally instructive. To her, it’s more likely that the young porpoises were watching because they were curious.

And because anacondas are strong, Wild theorized that the snake could have been injured or dead when the porpoises captured it. Of all the things a dolphin could put in its mouth, “this one looks a little extraordinary,” she said.

“This is the first time I’ve heard of dolphins playing with a large snake,” added Wild, who has observed bottlenose dolphins using shells as tools.

Another thing visible in the photos caught our attention: the erect penises of male porpoises.

“It might have been sexually stimulating for them,” said Diana Reiss, a marine mammal scientist and cognitive psychologist at Hunter College in New York who was not involved in the study. “It could have been something they could rub against.”

The excited males could have been playing a sexual prank on each other when the snake got tangled up.

Scientists who study dolphins are aware of the animals’ sexual tendencies, such as rubbing their genitals on toys or inserting their penises into animate or inanimate objects. According to Reiss, they often use the penis for tactile interactions. She has observed male bottlenose dolphins trying to penetrate the blowhole of a pilot whale rescued from an aquarium. It is possible, she added, that the males tried to insert their penises into the snake.

“There are so many questions,” said Entiauspe Neto.

Much more is known about marine dolphins than freshwater dolphins, or porpoises, in part because it is more difficult to see what happens when river water is cloudy. For Reis, although limited in nature, “these observations are always valuable. They give us another glimpse into the lives of these animals, especially their life in the wild.”

Whatever happened in this encounter between animals, it’s not the kind of thing that appears in children’s books.