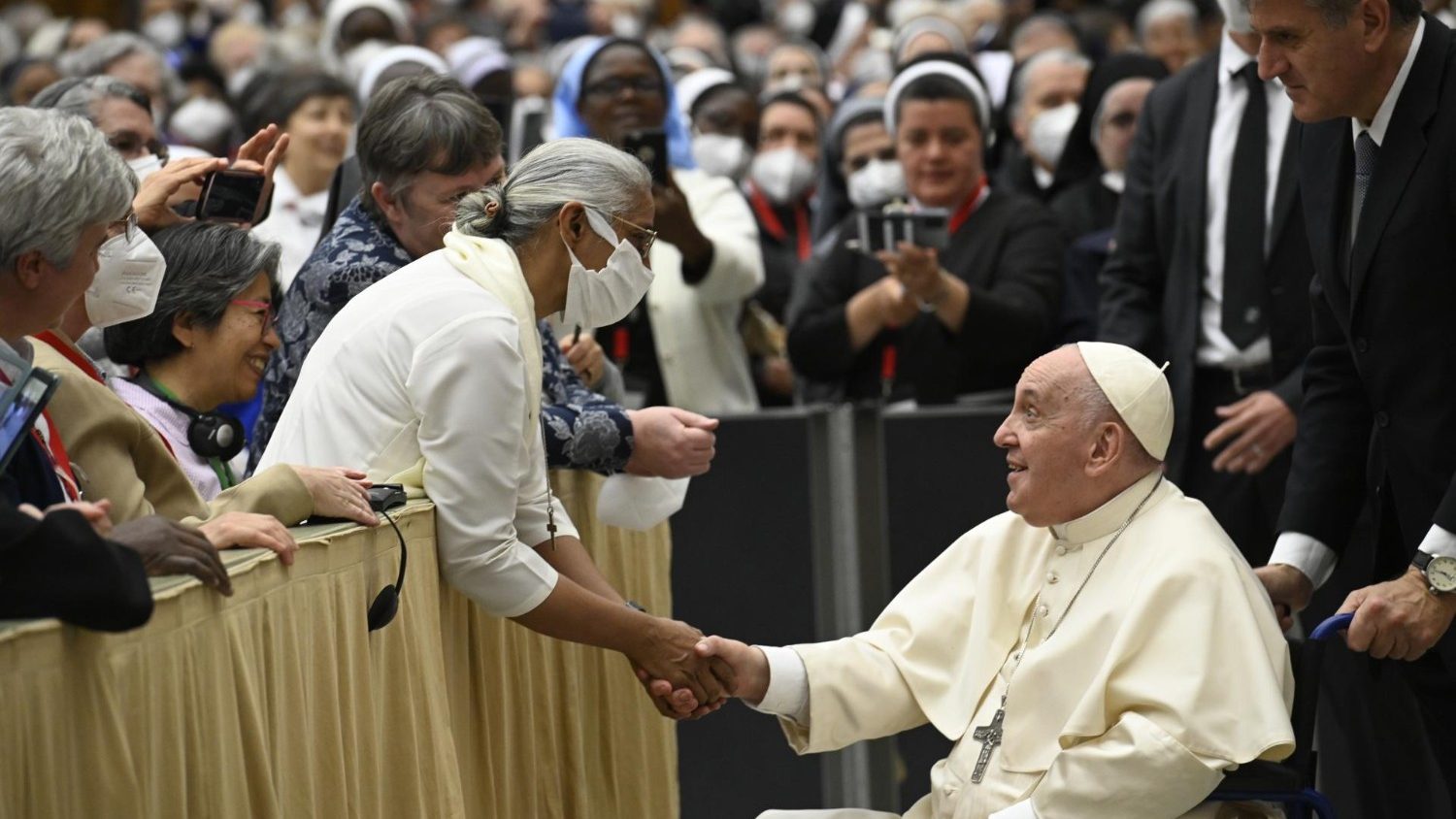 The Pope to the Sisters: Walk alongside the wounded brothers and sisters of today

Abhishek Pratap 3 weeks ago News Comments Off on The Pope to the Sisters: Walk alongside the wounded brothers and sisters of today 5 Views

“In the light of these two disciples of Jesus, Peter and Mary Magdalene, contemplate and let Jesus look at you and transform you, and in the same way you will be able to place yourselves at the service of humanity. disturb, will be able to illuminate your steps for a hopeful proclamation of the Gospel”: Pope Francis said when he received this Thursday, May 5, the religious of the International Union of Superiors General (UISG)

“I invite you, who have the specific mission of animating the life of your congregations and accompanying discernment in your communities, to enter this foot-washing scene, following this path of the Church, and to live your authority as a service.”

This was the exhortation of the Holy Father when he received in audience at the end of the morning of this Thursday, May 5, in the Paul VI Hall, in the Vatican, the religious of the International Union of Superiors General (UISG), who are May 2-6, its 22nd Plenary Assembly.

In his speech given to the religious, the Pope started from the theme chosen for this Assembly, “Embracing vulnerability on the synodal path”, to dwell on some points and offer some keys for their discernment.

In particular, Francis highlighted two scenes from the Gospel that came to mind – he said – when thinking about this theme of “embracing vulnerability”. The first is when Jesus washes Peter’s feet at the Last Supper:

In going out to meet him, the Son of God puts himself in a vulnerable position, in the position of a servant, showing how the life of Jesus can only be understood through service. Together with Peter, the Church learns from her Master that, in order to be able to give her life at the service of others, she is invited to recognize and accept her own fragility and, from there, to bow to the fragility of others.

Religious life today also recognizes its vulnerability, even if it is sometimes difficult to accept, the Pontiff said. “We were used to being significant for our numbers and for our works; to be relevant and socially considered. The crisis we are going through has made us feel our weaknesses and invites us to assume our minority. All this invites us to recover the attitude that the Son of God has towards the Father and towards humanity, that of ‘becoming a servant’.”

It is not a matter of servitude, Francis noted. “To lower oneself is not to withdraw into one’s wounds and inconsistencies, but to open oneself to relationship, to an exchange that dignifies and heals, as it did with Peter, and from which a new path begins with Jesus.”

Do not be afraid in this search for new ministries and new ways of exercising authority evangelically. Let it not be a theoretical and ideological quest – ideologies mutilate the Gospel – but a quest that starts from approaching the feet of wounded humanity and walking alongside wounded brothers and sisters, starting with the sisters in their communities, Francis urged.

Put yourself at the service of humanity

The second scene highlighted by the Holy Father, speaking of vulnerability, has Mary Magdalene as the protagonist. “She knows very well what it means to move from a disordered and fragile life to a life centered on Jesus and the service of the proclamation,” Francis said.

In the light of these two disciples of Jesus, Peter and Mary Magdalene, contemplate and let Jesus look at you and transform you, and in the same way you will be able to place yourself at the service of humanity. From their own fragility, freed from the spirits that trouble them, they will be able to light their steps for a hopeful proclamation of the Gospel.

Finally, the Pope dedicated the last part of his speech to the synodal journey, the contribution that the Church expects from religious life on the Church’s synodal journey, and what is their service as superiors on this journey.

“If the synod is above all an important moment of listening and discernment, the most important contribution you can make is to participate in reflection and discernment, putting yourself in an attitude of listening to the Spirit and lowering yourself like Jesus to meet your brother in their need. And this through the various mediations planned at this time – as consecrated women, in parishes, in dioceses – enriching the Church with their charisms.”

I count on you, dear sisters, to accompany the holy people of God in this synodal process, as experts in building communion, in promoting listening and discernment. Accompanying ministry is urgent.

Francis concluded by encouraging them to move forward, blessing the superiors general and their communities, particularly the most vulnerable members, and asking for prayers.