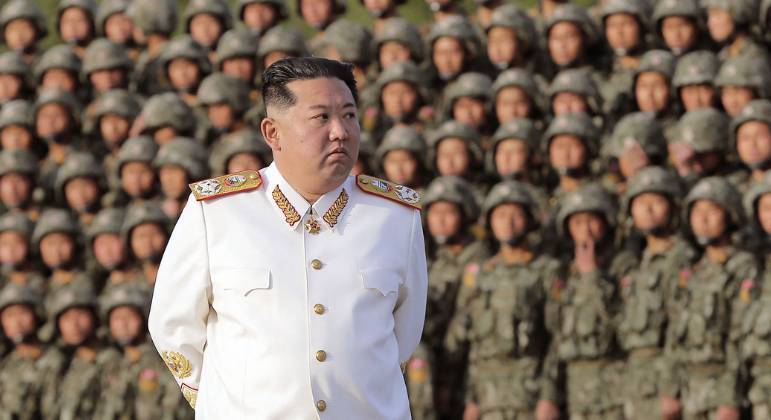 North Korea fired a ballistic missile from a submarine (SLBM) on Saturday, the South Korean army announced, hours after the United States warned of the possibility of Pyongyang resuming its nuclear tests.

“Our military detected around 14:07 (02:07 GMT) that a short-range ballistic missile, allegedly an SLBM, was fired from the sea in Sinpo, South Hamgyong,” South Korea’s Joint Chiefs of Staff said in a statement.

Since the beginning of the year, North Korea has considerably increased its ballistic tests and launches.


This Saturday’s shooting is the country’s 15th show of force and comes shortly before the inauguration, next Tuesday (10), of the new South Korean president, Yoon Suk-yeol, with a more hostile stance towards Pyongyang than than its predecessor Moon Jae-yeol.

The United States, for its part, assured on Friday (6) that North Korea could prepare a nuclear test later this month, the first since 2017.

According to the Japanese Coast Guard, citing its Ministry of Defense, Pyongyang today launched an object, “probably a ballistic missile”.

Last week, during a large military parade, North Korean leader Kim Jong-un promised to develop his nuclear forces “as soon as possible” and warned against possible “pre-emptive” attacks, as mentioned by the future South Korean president.

On Friday, Washington, through diplomatic spokeswoman Jalina Porter, warned that Pyongyang “is preparing the Punggye-ri test site and may be ready to conduct a test this month, which would be its seventh nuclear test.”

“This analysis is consistent with recent public statements by North Korea itself,” he added, assuring that the US government “will continue” its “close coordination” with its allies.

US President Joe Biden will travel to Japan and South Korea this month, and Pyongyang will be one of the topics he will address during his visit.

This recent release could be related to Biden’s visit or the inauguration on Tuesday of Yoon, who has promised a hard line with his northern neighbor.

For Leif-Eric Easley, a professor at Ewha University in Seoul, “instead of accepting invitations to dialogue, the Kim regime appears to be preparing to test a tactical nuclear warhead.”

North Korea has imposed a self-imposed moratorium on nuclear and long-range weapons tests amid a diplomatic rapprochement between Kim and then-U.S. President Donald Trump that ultimately failed in 2019 and has stalled ever since.

Pyongyang has carried out six nuclear weapons tests since 2006. The last and most powerful was in 2017 with a 250-kiloton hydrogen bomb.

“A seventh nuclear test would be the first since September 2017 and would fuel tensions on the Korean peninsula, raising the dangers of miscalculation and miscommunication between the Kim regime and Yoon’s new government,” Easley said.

South Korea has a greater conventional weapons capability than its northern neighbor, and Yoon has called for more US military assets. In 2021, Seoul tested supersonic missiles, launched from a submarine.

On Wednesday, Pyongyang fired what Seoul and Tokyo described as a ballistic missile, but North Korean state media, which usually reports on the tests, did not mention it.

For Hong Min, a researcher at the Korean Institute for National Unification, “Today’s launch is similar to Wednesday’s ballistic missile.”

“It appears that the North is carrying out a series of tests to achieve its strategic objectives,” he said.

So far, negotiations to convince Kim Jong-un to give up nuclear weapons have not been successful.

For five years, South Korean President Moon Jae-in pursued a policy of dialogue with Pyongyang, but according to his successor, this “servile” approach was a clear failure.

Analysts say Kim Jo-un may be signaling with this series of evidence that he is not open to dialogue with the new government.