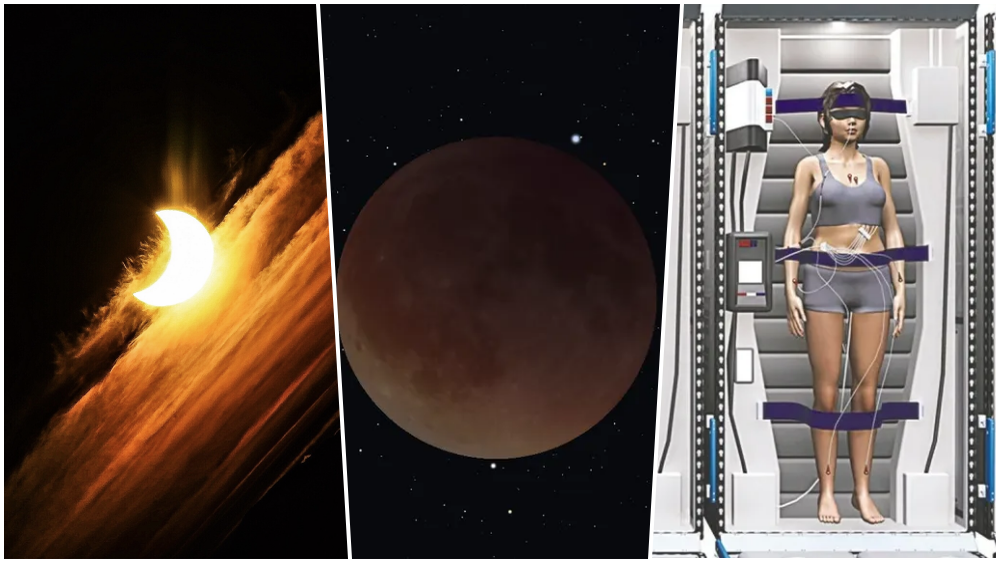 The sky is not the limit | Photos of the solar eclipse, the next lunar eclipse e+!

Raju Singh 3 weeks ago Technology Comments Off on The sky is not the limit | Photos of the solar eclipse, the next lunar eclipse e+! 12 Views

Two eclipses, one solar and one lunar, are the subject of the moment. The first took place on April 30th and was not visible in Brazil, but the second will come in mid-May and can be observed in any region of the country. Below, we have selected the best photos of the solar eclipse and explained everything in detail for you to follow the lunar eclipse.

Plus, we have a new SpaceX record, solar flares, and a new Russian rocket, which you can check out below.

The first solar eclipse of 2022 was partial and visible only in the southernmost countries of the Americas. However, luckily for us, many managed to capture beautiful photographs, which you can find in the link above.

Solar eclipses happen when the Moon blocks the Sun’s light by positioning itself in near-perfect alignment between the star and our planet. This event never comes alone: ​​it is followed by a lunar eclipse, usually two weeks later. And by the way…

On May 16 there will be a total lunar eclipse, visible across the country. The Earth’s shadow will cover the Moon completely, leaving it looking reddish. The event will begin around 10:30 pm on May 15th, with a partial eclipse starting to darken the Moon, and will run until 3:50 am. In total, it will be 5 hours and 19 minutes.

The total eclipse will actually begin at 00:29 am (on the 16th), when the Moon will gain a very reddish color, which gives it the nickname “Blood Moon”. All the while it will be high enough in the sky for good observation.

While NASA is considering using methods of inducing astronauts to hibernate during long space travels, a new study suggests this may not be as useful as it sounds. The idea is to conserve the energy of the human body while the spacecraft traverses interplanetary space, but perhaps this economy does not occur, even in hibernation.

According to the study, only small animals can save considerable energy while hibernating. Bears, for example, are actually consuming more energy during prolonged sleep. In other words, humans wouldn’t benefit from an artificially induced nap either.

Russia debuted the new Angara 1.2 rocket by sending a military satellite from its Ministry of Defense into space. The payload is named Kosmos-2555 and is already sending telemetry data from space as it moves in a near-polar orbit (when traveling from one pole to the other of the planet) at an altitude of 500 km.

Russian officials did not reveal details of the mission. Angara 1.2 can send 3.8 tons into space, but the family also has larger versions. The Angara A5, for example, can carry around 24.5 tons of payload.

The Crew-4 mission, launched last Wednesday (27), was the record holder for SpaceX trips to the International Space Station (ISS). The astronauts on board arrived at their destination less than 16 hours after taking off from NASA’s Kennedy Space Center. In total, the flight lasted 15 hours and 45 minutes.

According to the manager of NASA’s Commercial Crew Program, “It’s about the same time it takes to get from New York to Singapore, so it’s interesting.” The ISS is at an altitude of about 400 km. The three astronauts will spend six months on the orbital station.

The Sun emitted a strong solar flare on May 3, 2022, peaking at 9:25 am ET. NASA’s Solar Dynamics Observatory captured an image of the event, which was classified as X-class. https://t.co/PMsgdJxMlj pic.twitter.com/PWJUI395Cc

An intense solar flare happened this Tuesday (3), but in the southern region of the Sun’s surface. This means that the emitted particles did not come directly towards us. Still, the intensity of the star’s activities has scientists on the alert for upcoming events that could happen.

The explosion of day 3 was classified as category “X”, the most powerful, with intensity 1.1. As the particles did not come towards Earth, there will be no aurora borealis and no risk to our satellites and communication systems.

Raju has an exquisite taste. For him, video games are more than entertainment and he likes to discuss forms and art.
Previous Share of obese adults in Brazil should rise to 30% – 05/08/2022 – Equilíbrio e Saúde
Next Professor is successful on the internet with videos in which he interacts with himself | Education