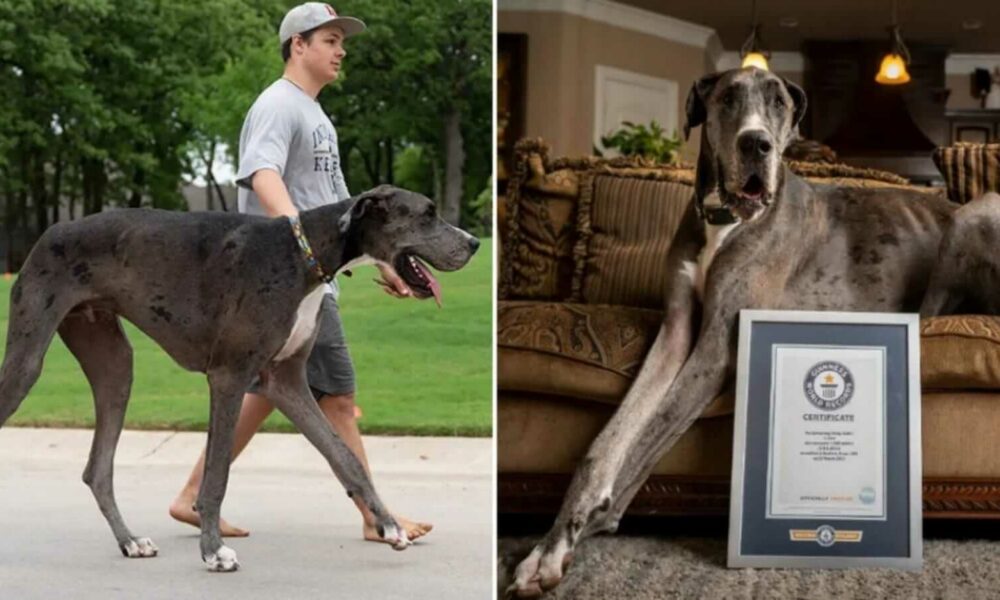 Zeus is officially the biggest dog in the world, and he was big since he was a puppy; meet

Abhishek Pratap 1 week ago News Comments Off on Zeus is officially the biggest dog in the world, and he was big since he was a puppy; meet 5 Views

How tall is your dog? She never thought to measure it? Well, maybe he can win some prizes. On May 4, a German Dog had his photo registered in Guinness, the Book of Records. Zeus, who is only 2 years old, is officially the biggest dog in the world.

Zeus and his owner, Brittany Davis, live in Texas, United States, and to Fox News, Brittany told that it was her dream to have a German Dog since she was a child. So, upon discovering that a friend of her brother’s bred dogs of this breed, she finally got herself a Zeus.

The dog was 8 weeks old when he moved in with Brittany, and according to her, he was already big. The idea to inscribe Zeus in Guinness came during a family gathering. The tutor says that having the dog certified by the Book of Records makes it even more special.

“We didn’t think that was even a possibility, but once we measured it, we realized that it probably was,” Brittany said. “It was a whirlwind and unexpected. We never thought we would own the biggest dog alive.”

At first, the biggest dog in the world was another German Dog, also called Zeus, who lived in the state of Michigan, in the North American country. However, the first Zeus passed away in 2014.

According to Guinness, Zeus averages 3.5 feet, which when converted exceeds 1 meter in height. The owner said the dog likes to walk around the neighborhood, sleep by the window and visit local farm markets.

Furthermore, Zeus also has a huge appetite that matches his size. Brittany confirmed that feeding the world’s biggest dog isn’t cheap. The pet eats 12 cups of food a day and sometimes snacks with fried eggs and even ice cubes.

“He likes to steal the baby’s pacifier off the counters and any food left on the counters is definitely free for him,” Brittany said. “His water bowl is a sink and he loves to jump on the fence and talk to the dogs next door.”

Zeus’ tutor still has four more pets, in addition to Zeus: three Australian birth dogs and a kitten, named Penelope. Commonly, dogs of this breed tend to have shorter lives based on their size, but Brittany confirmed that Zeus is happy and healthy.