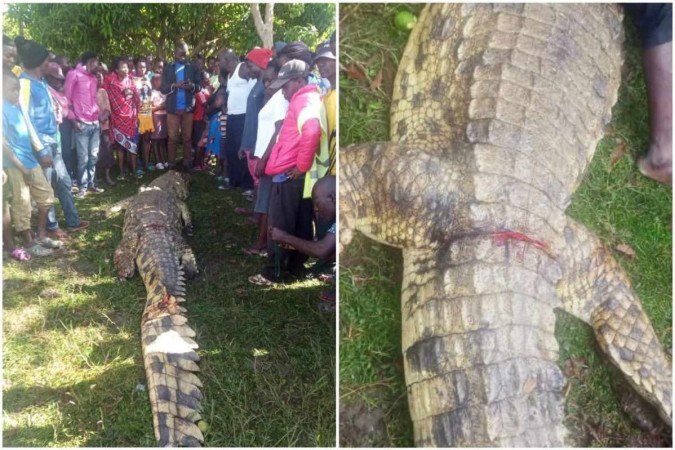 Crocodile is captured and killed by villagers after attacking a child


Using a piece of meat for bait, villagers caught crocodile with a hook. Then they killed the animal – (Credit: The Standard/Reproduction)

A group of residents of East Asembo, in Rarieda, Kenya, captured and stabbed to death a five-meter-long crocodile after attacking a three-year-old boy who succumbed to his wounds and died. The case took place last Saturday (7/5).

According to the local newspaper The Standard, the attacked child accompanied the mother, who went to Lake Victoria in Ralayo Beach to fetch water. The boy was with three other classmates of the same age when he was attacked, right in front of his mother, who was unable to help him. Then the animal entered the water and disappeared. The boy was rescued, but did not survive.

In 2020, a 32-year-old woman was killed after a crocodile attack at the same location. Dissatisfied, a group of fishermen in the region made a trap to capture the animal. “We attached the meat to a hook. So when the crocodile bites into the meat, it is caught by the hook,” explained fisherman Paul Omondi.

With the reptile trapped, residents killed the animal with axes and knives. The Kenya Wildlife Service (KWS) was called after the crocodile’s death and collected the remains for proper disposal. The agency also warned residents to, instead of “taking justice into their own hands”, trigger agents in cases of danger from wild animals.

heard by The Standard, the chairman of the Siaya County Beach Management Unit, where Rarieda is located, reported that there has been an increase in cases of crocodile and hippopotamus attacks in the area. The likely cause is that there is an increase in population in areas previously reserved for wildlife.