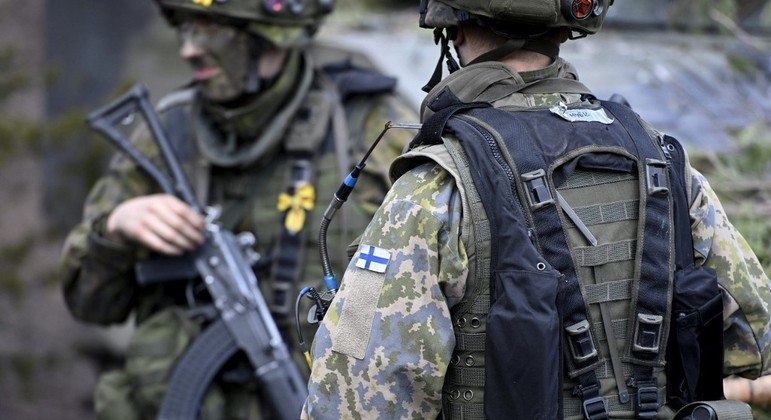 The president and prime minister of Finland declared themselves in favor, on Thursday (12), of joining NATO “without delay” and said that the decision of the Nordic country would be announced, in principle, on Sunday (15).

Russia reacted immediately to the news and considered that “without a doubt” it will be a threat to the country, in the words of Kremlin spokesman Dmitry Peskov. “NATO’s expansion and the Alliance’s approach to our borders does not make the world or our continent more stable and secure,” Peskov told the press.

The Finnish candidacy is a direct consequence of the war in Ukraine and will likely be imitated by a similar demand from Swedenexpected for the next few days.

“Membership of NATO would strengthen Finland’s security. As a member of NATO, Finland would also strengthen the Alliance as a whole. Finland must apply for membership without delay,” they said in a statement published on Thursday. , President Sauli Niinistö and Prime Minister Sanna Marin.


The Norwegian Secretary General of NATO, Jens Stoltenberg, welcomed the step taken by Finland and assured that its candidacy “would be warmly received in NATO and the process would be fluid and fast”.

Like many NATO members, German Chancellor Olaf Scholz expressed his “full support” for Finland, while the French Presidency said it “fully supports the sovereign decision” of the Nordic country.

The two Finnish leaders intend to hold a press conference on Sunday on “decisions involving Finland’s security policy”, at which time the request will be made official.

Currently, 76% of the 5.5 million Finns say they are in favor of joining, according to a survey published on Monday (9). Before the war in Ukraine, support was 25%.

The position of both sets the trend of the country, which has a border of more than 1,300 kilometers with Russia, with which it has a history of wars.

“Look in the mirror”


In the Finnish Parliament, a majority of the 200 deputies is also in favour. Lawmakers will meet on Monday to examine the government’s proposal and vote later, House Speaker Matti Vanhanen said.

“Joining NATO is not a decision that goes against anyone,” the Finnish president said on Wednesday, in response to Russian warnings on the issue. For him, who for years bet on an East-West dialogue, Russia can only blame itself when observing the union of the neighboring country to the Alliance.

“If we joined NATO, my response to Russia would be, ‘You provoked this, look in the mirror,'” the president said.

“Mr Putin, one of the things you said was that you didn’t want a strong NATO on your western flank. That’s what you’re going to get,” said Pentagon spokesman John Kirby, referring to an alliance “that is gaining strength” and “deterrence”.

Subject to Moscow-enforced neutrality during the Cold War, Finland joined the European Union and NATO’s Partnership for Peace after the end of the Soviet Union, but is not a member of the Alliance.

“We hope that Sweden, our partner, will come to the same conclusion as us, and we can be candidates together,” said Finnish Defense Minister Antti Kaikkonen.

Sweden, which has also remained outside military alliances for decades, is likely to announce its membership bid after a meeting of Prime Minister Magdalena Andersson’s Social Democratic Party scheduled for Sunday.

The two countries are concerned about Russia’s reaction to the membership application and have been trying to secure security guarantees for the months leading up to formal entry into the Alliance. Proof of this is the agreements signed on Wednesday (11) with the United Kingdom for mutual assistance.

To effectively join the Alliance, the parliaments of the 30 member countries must ratify the membership of the new members, a process that can take months.

Meanwhile, the two countries, both members of the European Union, can also feel supported by Article 42.7, which provides for mutual assistance in European treaties, highlighted Finnish Foreign Minister Pekka Haavisto.