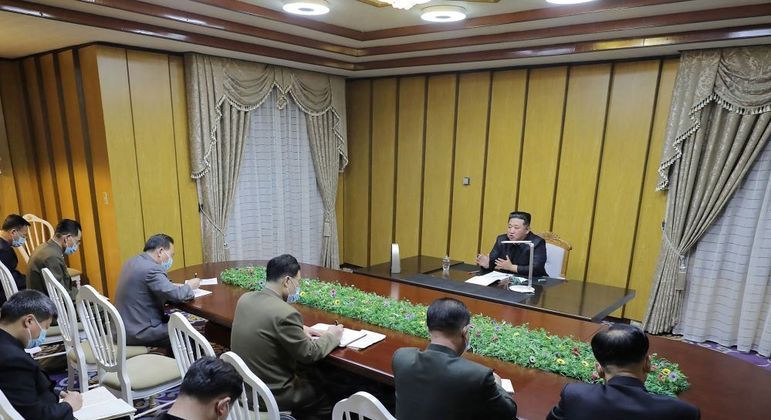 North Korea announced on Friday the first confirmed death from Covid-19 and said that 187,000 people with fever are “isolated and being treated” after the nationwide spread of the country’s first coronavirus outbreak since the beginning of the pandemic.


The isolated communist country, which has nuclear weapons, confirmed on Thursday (12) its first outbreak of Covid-19. and announced the implementation of a “maximum emergency epidemic prevention system” after several fever patients in Pyongyang tested positive for the Omicron variant.

“A fever, the cause of which could not be identified, has spread explosively across the nation since late April,” the official KCNA news agency reported. “Up to 187,800 people are isolated and being treated,” he added.

The agency also reported that six of those patients died, “one of them after testing positive for the BA.2 subvariant of Ômicron”, a highly contagious strain of the coronavirus.

With its 25 million people unvaccinated against the coronavirus and a poor health infrastructure, North Korea could suffer in the face of a major outbreak of the epidemic, experts say.

Leader Kim Jong-un held an emergency meeting with his political cabinet on Thursday and ordered nationwide lockdowns in an attempt to stem the spread of the disease.

On Friday, KCNA said Kim had visited the offices of the emergency department of epidemic prevention. “It’s the most important challenge, and our party’s biggest task is to quickly reverse the public health crisis,” he said.


North Korea is likely to face “great chaos” due to the rapid spread of the Omicron variant, said Cheong Seong-chang of the Sejong Institute of South Korea.

“If the number of Omicron deaths grows, Pyongyang may have to ask China for help,” he added.

Beijing, North Korea’s only major ally and benefactor, on Thursday showed a willingness to help its neighbour.

But China, the world’s only major economy that maintains a restrictive “zero Covid” approach, is struggling on its turf with multiple outbreaks of Omicron, some in major cities such as Shanghai, which have been under strict confinement for weeks.

In South Korea, the new government of President Yoon Suk-yeol on Friday presented an offer to send vaccines to North Korea, but admitted that the topic had not been discussed with Pyongyang.

The impoverished nation had since the beginning of 2020 imposed a strict foreign blockade that had sunk its economy and trade.

Around it, countries like South Korea and China face or have faced strong outbreaks of Covid-19 driven by the Ômicron variant.

According to analysts, China’s experience shows that confinements are not that useful in the face of Omicron, but without vaccines and antiviral treatments Pyongyang doesn’t have many options.

Hours after announcing its first Covid outbreak, the communist regime launched three ballistic missiles from the Sunan area, near the capital, in the country’s 16th weapons test this year.