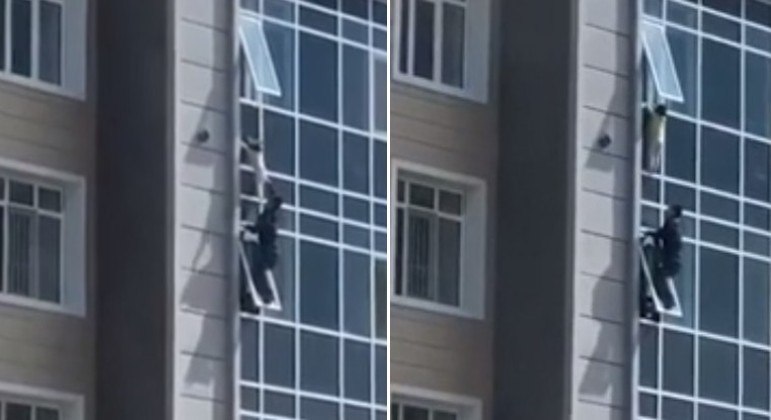 A true real-life hero clung to the window of a building in Nursultan, the capital of Kazakhstan, to save a little girl dangling outside the 8th floor.

According to the British tabloid Daily Mail, Sabit Shontakbaev, 37, was walking to work alongside a friend when he noticed a terrified crowd at the scene of a 3-year-old child in danger.


Local outlets claim she was left alone in the apartment while her mother went shopping. In the meantime, the girl piled up toys and pillows and went out the window.

With the imminent risk of the fall, Sabit acted quickly and ran to the neighbor who lives in the apartment below the one where the child was. “We crashed and luckily they [os moradores] immediately opened the door,” he reported.


By the time Sabit tried to approach the little girl, she had already been hanging in place for approximately 15 minutes.


Worth the click: Photographer does not lower the camera and is punched by a gorilla: ‘Run over by a train’

“I didn’t have a seat belt, so my friend held my legs,” the worker explained. “At that moment I didn’t think about anything, I just wanted to help the child.”


Fortunately, with one hand outstretched, Sabit caught the girl’s fall. As soon as he returned the girl inside the building, the hero didn’t even have time to receive a thank you: he didn’t want to be late for work.

Still, he won the salute of the local mayor, was awarded a medal by a Kazakh deputy minister, and gained a new job as a rescuer.


A little boy who fell from the 7th floor of a building had the fall caught by a blanket. Check out!