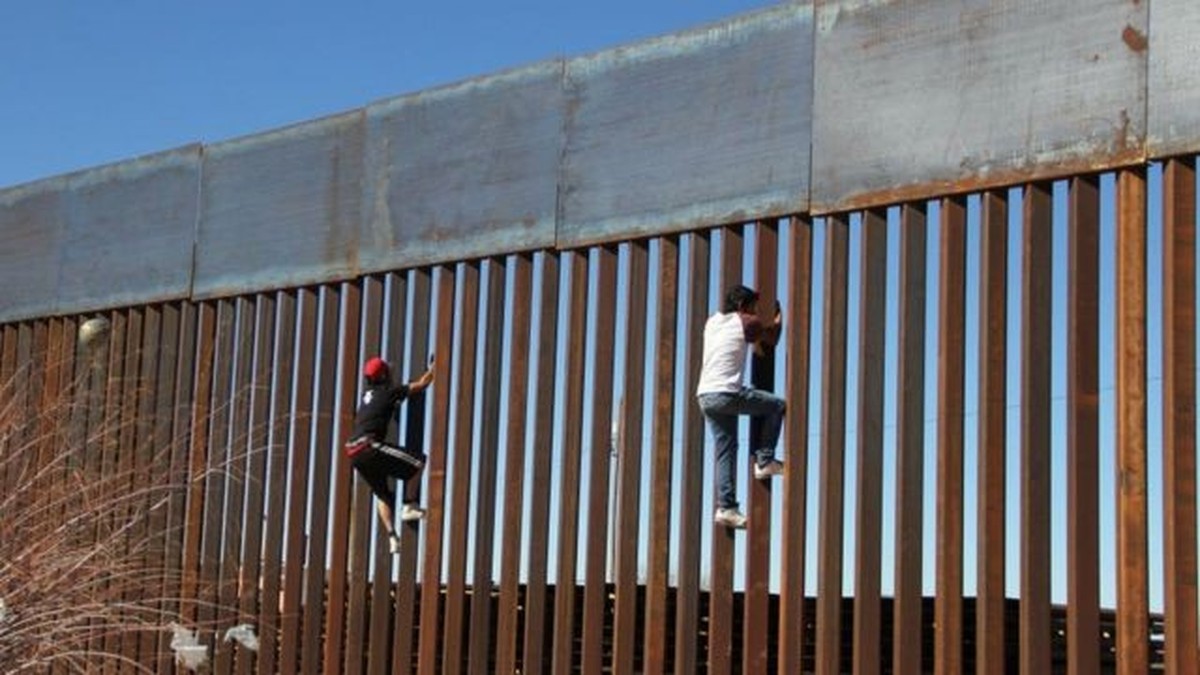 ]When Héctor Almeida Gil was at the top of the border fence between the United States and Mexico, he suddenly saw several people desperately trying to climb.

The 33-year-old Cuban dentist was with a group of immigrants trying to jump over one of the 9-meter-high barriers that separate Mexico and the US in the state of California.

The fence is the tallest on the border erected during the administration of Donald Trump, who said that this “beautiful wall” he had built would be “impassable”.

But many migrants try to climb over the fence almost every day. Some do. Others get stuck in it and a worrying number of people are seriously injured trying.

Almeida Gil climbed the fence in late April with the help of a ladder commonly used by migrant smugglers.

When the Mexican police approached the scene, several people ran up the stairs and the Cuban was only able to hold on to the bars to avoid a stronger fall.

He was a little “lucky” because he “only” broke one leg. But he saw a woman fall and break both limbs, and another man suffer a serious head injury.

Almeida was admitted to a hospital at the University of California at San Diego (UCSD), a city that has two counties that border Mexico, where 375 injuries and 16 deaths were recorded from 2019 to 2021, most victims of falls from the wall.

That’s five times more than between 2016 and 2018, and coincides with the installation of the 9-meter fence, which is more dangerous to climb than the 3-5 meters before it, according to a study led by Amy. Liepert of UCSD.

“The most common injuries are fractures in the extremities, especially in the legs. In general, they are quite serious fractures, not a simple break of a part of the bone”, she explains to BBC News Mundo.

Some fences are reinforced with barbed wire, especially in urban areas.

Starting in the 1990s, the US government started building various types of barriers on its border with Mexico.

One of the most common is a metal fence of vertical bars installed in urban areas and some mountainous or desert areas, in the States of California, Arizona, New Mexico and Texas.

But there are points without any barriers, something Donald Trump promised to change with a wall taller than any other: “It’s practically impassable,” he said, at the time he authorized construction.

One of the models chosen was a 9 meter metal fence with metal plates on top, which was installed in the States of California and Arizona.

While it did not prove insurmountable for migrants, who use stairs over 30 feet, the barrier proved dangerous.

In the past three years, 16 people have lost their lives on the California border, according to Liepert’s study. And in Arizona last April, a migrant died of asphyxiation after hanging upside down for hours.

In the previous three years, there were no deaths.

Liepert explains that the injuries seen in recent years are not mild and correspond to serious falls.

In addition to the injured, 16 people have died in the last three years – Photo: Getty Images/Via BBC

“The bones that we are seeing broken are usually in several places, with many soft tissue injuries, which is more consistent with a fall from a great height”, explains the doctor.

His investigation is about California, but Liepert says he has heard of similar cases in other US border states. “Some data are starting to come out from other trauma centers. None of this has been published so far,” she points out.

On the Mexican side, there has been no research like the one published in late April by Liepert and his colleagues in the scientific journal JAMA Surgery.

When consulted, US Customs and Border Protection (CBP) did not respond.

According to The Washington Post, CBP does not have a record of the number of people injured in the attempt to cross the border fence.

But the number of visa-free migrant apprehensions reached record levels in late 2020 and the first nine months of 2021, which often serves as an indication of a wave of migrants trying to reach the US.

Many of those who try to jump over the fence are people who are not physically able to do so – Photo: Getty Images/Via BBC

In fiscal year 2021, more than 1.7 million people were detained after crossing the border from 160 countries. Most were migrants from Guatemala, Honduras, El Salvador and Mexico.

For hospitals like the one at UCSD, treating migrants in trauma areas has also become a growing expense for which they are not reimbursed.