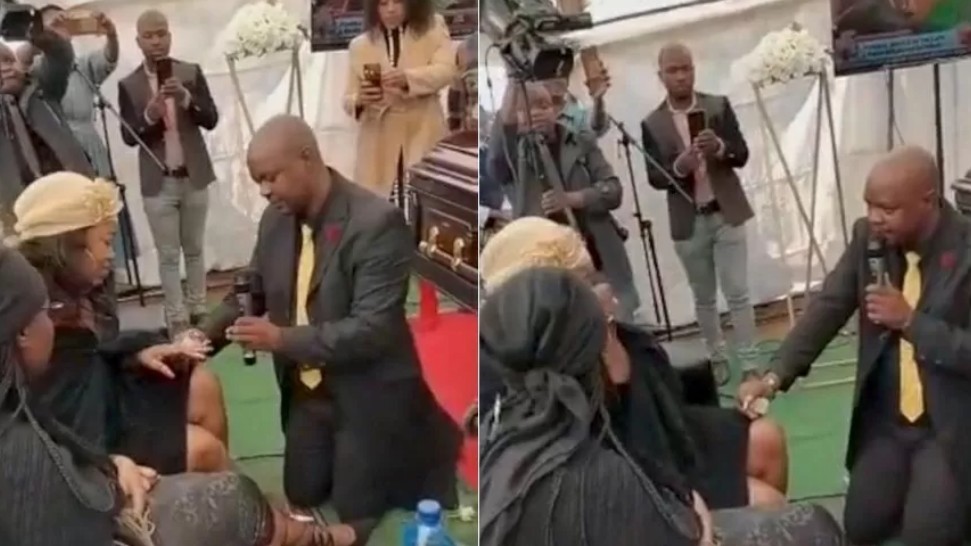 Video: Pastor asks girlfriend to marry him during her father’s funeral and divides opinions on TikTok

Abhishek Pratap 1 week ago News Comments Off on Video: Pastor asks girlfriend to marry him during her father’s funeral and divides opinions on TikTok 5 Views

A video circulating on TikTok shows the moment a South African pastor proposed to his girlfriend during her father’s funeral. The man’s action divided opinion on the platform. Despite this, everything indicates that the girl accepted the proposal. The information is from UOL.


The marriage proposal was filmed by guests at the wake and released by the pastor himself. The video has 285,500 views, 8,564 likes and 778 comments.

In the publication, the pastor wrote: “Marriage proposal to the deceased’s daughter right at the funeral. Wiping the tears.”

The video ends with him putting the ring on the girl’s finger.

The American portal New York Post reported that the man performed the funeral service. Suddenly, he got down on one knee and asked his girlfriend to marry him.

According to the pastor, he hoped that the proposal could comfort his girlfriend in some way, as she was very shaken by the loss of her father.

However, some netizens disapproved of his attitude.

“Your attitude was totally wrong. No matter how you try to justify it,” one user commented.

“The proposal was disrespectful on every level,” wrote another.

On the other hand, there were people who defended the pastor’s initiative.

“Maybe his wish was to propose while his father was still alive,” commented one netizen.

“He probably thought, ‘You may have lost a parent, but I’ll be with you.’ This is love,” speculated another person.