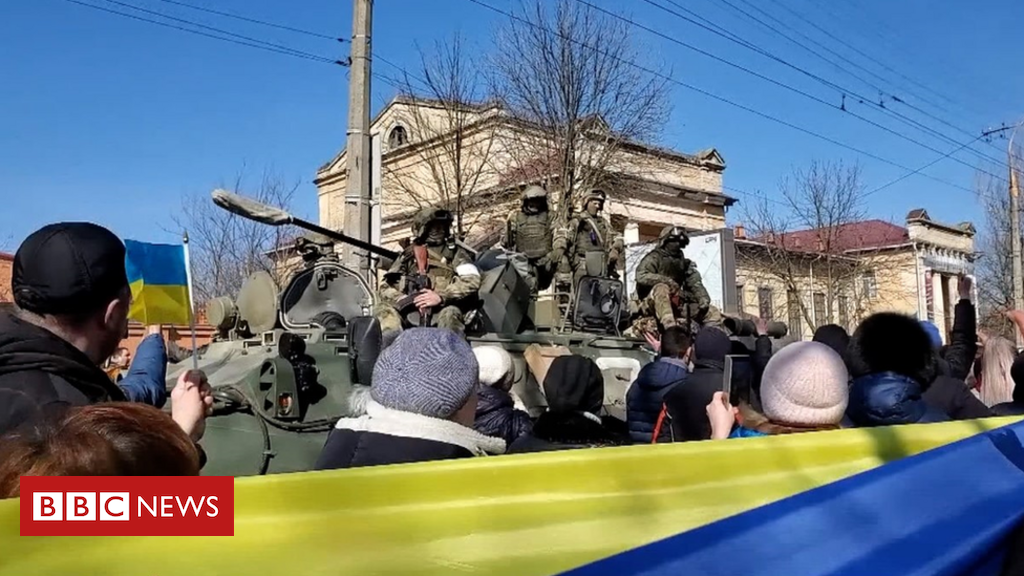 War in Ukraine: How Russia is changing Kherson, 1st city taken in conflict

Abhishek Pratap 5 days ago News Comments Off on War in Ukraine: How Russia is changing Kherson, 1st city taken in conflict 4 Views

Moscow-imposed authorities in the southern Ukrainian city of Kherson – the first captured by Russian troops during the invasion – intend to ask President Vladimir Putin to formally annex the region to Russian territory.

The Kremlin responded that locals will have to decide their fate – which seems to confirm Ukraine’s warning that Russia may be planning to hold a referendum in the city, which Kiev considers a farce and an illegal act.

Russia is already introducing its currency, media and internet services to Kherson and other parts of Ukraine occupied by the Russian army.

Why did Russia focus on Kherson?

Russian forces occupied Kherson in early March, a week after the start of the invasion of Ukraine.

She was the first major city to fall. Before the invasion, its population was 290,000 – but, according to its former mayor, about 40% of residents have left the city since then.

If Russia intends to occupy southern Ukraine and establish a land link to Crimea, Kherson, located at the mouth of the Dnieper River on the Black Sea coast, will be critical, according to the UK Ministry of Defence.

What changes did Russia impose on Kherson?

Russian military officials ousted the elected mayor of Kherson. According to Russian state news agency Ria, Ihor Kolykhaiev was “not cooperating” with the occupation forces. It was replaced by a pro-Russian administration for the city and region.

Access to Ukrainian TV channels was blocked and local internet service providers were replaced by Russian providers. Residents of Kherson were forced to listen to pro-Russian radio stations for news.

Ukraine says Russia’s aim is “to make its false propaganda an undisputed source of information”.

The new regional government is also phasing out the Ukrainian currency – the hryvnia – and introducing the Russian ruble. The four-month transition period began on May 1, with authorities banning remittances of Ukrainian money to banks.

Residents of Kherson told the BBC that military officials have started paying pensions in rubles, but many are trying to find discreet ways to defy Russian forces, including exchanging rubles for hryvnias.

Does Russia intend to hold a referendum?

Ukrainian President Volodymyr Zelensky has warned residents of Kherson that Russia intends to call a referendum in that region to decide on its separation from Ukraine and the formation of a “people’s republic”. Zelensky advised people not to provide Russian authorities with personal data, such as passport numbers, as they could be used to falsify votes.

The British Defense Ministry said in an April intelligence update that the referendum would be a way for Russia to justify its occupation of Ukraine. But former mayor Kolykhaiev claimed it would be illegal as Kherson is officially still part of Ukraine.

President Zelensky said the referendum was part of Russian plans to fragment Ukraine, creating “pseudorrepublics” across the country. And, apparently confirming the scenario, the deputy head of the Moscow-installed Kherson government, Kirill Stremousov, stated on Wednesday (11/5) that “a request will be submitted to make the Kherson region a matter of the Russian Federation”. .

Shortly afterwards, Kremlin spokesman Dmitry Peskov said that local residents would have to decide for their own future – and mentioned Crimea as an example.

How did Russia change the life of Ukraine’s breakaway regions?

Russia annexed the Crimean peninsula in 2014 after a referendum ruled invalid by the United Nations General Assembly.

Moscow established a link between Crimea and southern Russia, where it transported weapons, introduced the ruble and eliminated the hryvnia. And the pro-Russian press is now dominant on the peninsula.

But the situation in Kherson is even closer to Crimea than in the two regions of eastern Ukraine seized by pro-Russian forces shortly after the peninsula was annexed. Local pro-Russian leaders created so-called people’s republics in Luhansk and Donetsk, where they also adopted the ruble and provided Russian passports to the population.

Russia pays pensions and salaries to government employees in the region. In schools, children learn according to the Russian school curriculum, and Ukraine has complained to Moscow about the “Russification” of eastern Ukraine.

So far, there is no indication of Kherson’s annexation, only the creation of a people’s republic. Similar votes in Luhansk and Donetsk were largely rejected in May 2014, on charges of fraud and illegality.

But Russia is rumored to be planning further referendums in the two regions on its annexation to Russia. Ukraine said all votes deemed swindled would be void.