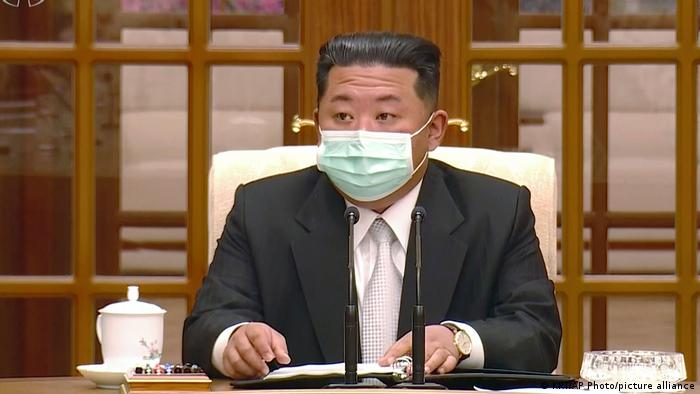 North Korean leader Kim Jong-un said on Saturday (14/05) that the Covid-19 outbreak faced by the country is a “major catastrophe” and called for joint action between the government and the population to stabilize the situation. ASAP.


North Korea this week admitted that it was facing the country’s first outbreak of covid and imposed a nationwide lockdown to try to contain the spread of the coronavirus. Since the beginning of the pandemic, the country had not registered any case of the disease. However, there were no signs of testing for suspected infections.

“The spread of the malignant epidemic is a major catastrophe that has hit our country since its foundation,” Kim said, according to state news agency KNCA. “But if we don’t lose focus on implementing epidemic policy and maintain strong organizational power and control based on the unity of the party and the people, we can overcome the crisis,” he added.

The North Korean leader also said that the country intends to follow the model of lockdows imposed by China – a nation that follows a strict zero covid strategy, which is currently shown to have reached its limit with the emergence of several recent outbreaks.

Kim also reportedly offered to donate medication he has in his home to families who are struggling, according to state media.

According to KCNA, North Korea on Saturday recorded 21 deaths from a fever of unidentified origins and more than 174,000 cases, bringing the number of deaths to 27 and infections to more than 524,000 since the outbreak began. at the end of April. Pyongyang said 243,630 patients had recovered and 280,810 remained in quarantine, not specifying how many cases of this fever and how many deaths were caused by Covid-19.

Official press said that virus samples taken on Sunday from an unspecified number of patients with the fever in the country’s capital confirmed that they were infected with the omicron variant of the coronavirus. Despite this, so far, North Korea has only confirmed one death from Covid-19.

Experts, however, estimate that the number of cases could be much higher given the limited testing capacity in the country. The death toll could also run into the thousands, as North Korea is one of the few countries in the world that has not launched a coronavirus vaccination campaign. Pyongyang has rejected vaccine offers from the World Health Organization (WHO), China and Russia.

The lockdown could further exacerbate the food crisis, as it will reduce the workforce and hamper efforts to combat drought.

The country reported the first cases of covid on Thursday, but did not provide information on the possible origin of the outbreak. The next day, KCNA reported that Kim visited the epidemic prevention headquarters, where he “learned about the spread of coronavirus” in the country.

North Korea was one of the first countries in the world to close its borders in January 2020 after the virus emerged in neighboring China. Earlier this year, however, the border with China was reopened for trade. The communist country prided itself on its ability to keep the pandemic under control and, until now, had not reported any cases of covid-19 to the WHO.

A WHO representative for North Korea said on Friday that the organization helped Pyongyang develop a vaccination plan earlier this year. South Korea also offered immunizations to the country.