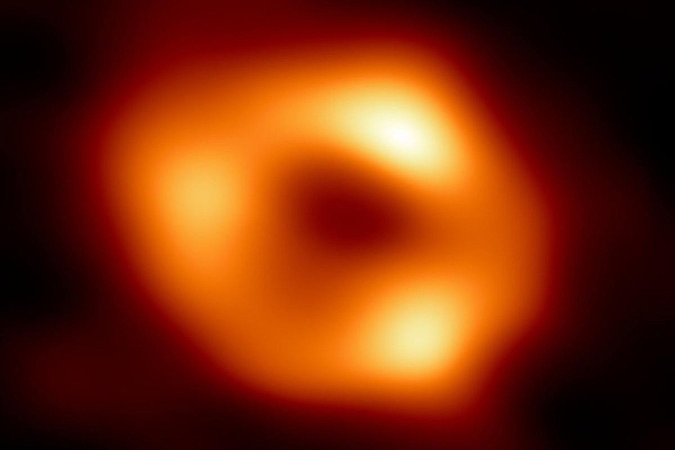 For the first time, astronomers have managed to photograph a supermassive black hole located at the heart of the Milky Way. Named Sagittarius A*, this object has a mass equivalent to 4 million stars the size of the Sun and is about 26,000 light-years from Earth. The historic image was presented yesterday at several simultaneous press conferences. It is also detailed in six scientific studies published in the Anthrophysical Journal. Based on the findings, experts believe that more space secrets could be revealed.

The international team that detailed the structure of Sagittarius A* is part of the Event Horizon Telescope (EHT) project, made up of more than 300 scientists from 80 institutes. Three years ago, the same group managed to capture images of another supermassive black hole, M87*, with a mass equivalent to 6 billion Sun-like stars and located 55 million light-years away. Despite using the same technique, the recent discovery has generated more work, as the new cosmic region is much smaller and is surrounded by clouds of dust.

Technically, a black hole cannot be examined directly, as the object is so dense and its gravitational pull is so powerful that not even light can escape its force of attraction. But it is possible to detect the matter that circulates around it, before it is swallowed. “It’s as if you want to take a clear picture of a dog that wants to grab your tail”, illustrates, in a statement, Chi-Kwan Chan, a researcher at the University of Arizona, in the United States, and one of those responsible for the work.

The search for the never-before-seen images began in 2017 and involved eight telescopes, which had to work in the same tune to take advantage of a gap of just 12 minutes, during which the gas cloud that surrounds Sagittarius A* makes a complete turn and moves away, revealing the silhouette of the black hole. Together, the devices formed a virtual Earth-sized telescope. “It was necessary for all these equipment to capture the same light wavefront”, explains, in a note, Antxón Alberdi, from the Instituto de Astrofísica de Andalucía, in Spain, and a member of the consortium of scientists.

From the data, the researchers were able to compare the structure of M87* and Sagittarius A* and, through a series of calculations, found that they behaved similarly. Scientists believe this proves that the same principles of physics operate at the heart of two very different sized systems. “We have two completely different types of galaxies and two very different masses of black holes, but when you look at them further, they are remarkably similar,” says Sera Markoff, co-chair of the EHT Science Council, astrophysicist at the University of Amsterdam. , in Germany, and one of the authors of the study.

Elcio Abdalla, professor of Physics at the University of São Paulo (USP) and coordinator of BINGO, a project to build the Brazilian radio telescope, believes that the international project has achieved remarkable data thanks to years of research and technological advances. “Basically, these scientists used Einstein’s equations and analyzed the orbits of stars around the candidate black hole. After the calculations, they verified that they were correct. Observing all of this is a difficult technical problem, and the technologies keep pace with the steps of science in these cases. Certainly, these observations could not have been made many years ago. Technology has advanced a lot”, he says.

The next question to be answered is what is inside the darkness of the hole. The researchers responsible for the study also hope, as new investigations, to unravel which came first: galaxies or black holes, an old doubt within astronomy. Abdalla believes that answers to these and other mysteries in the area may emerge. “We should, through other observations, draw conclusions about dark matter and energy. Knowing more about the Universe, we can contemplate more details of the Earth”, he justifies.

The USP specialist also emphasizes that revealing the Universe’s mysteries is an arduous and slow task, but one that yields important results. “Of course, this will remain for generations that have not yet been born. But without a beginning, we will not get to this point. Science teaches us to share with others and with generations that are not even here.”

There have been suspicions about the existence of Sagittarius A* since 1974, when an unusual radio source was detected in the center of the galaxy by the American Robert Brown. But it was only in the 1990s that astronomers Reinhard Genzel, from Germany, and Andrea Ghez, from the USA, confirmed the presence of the black hole, which earned the duo a Nobel Prize in Physics in 2020. The image that was revealed yesterday represents the first visual evidence of this object.

it’s not a photo

“We have to keep in mind the difference between photo and image. This is not a photograph. It is a visual representation of a radio dataset. It is not the result of visible light or an optical device. This result came about thanks to the combination of several antennas in different parts of the Earth, as if it were a single colossal antenna. In fact, this cosmic element cannot be seen: the bright spots are stellar material that emits radiation just before entering the so-called event horizon, from then on nothing else escapes the black hole. The advantage of this type of image is its high resolution. Sagittarius A* is an extensive radio source well known to astrophysicists, but this technique allowed them to see details that no instrument has ever been able to.”

The moon’s soil is fertile, show US scientists. In a laboratory experiment, here on Earth, they managed to grow plants on samples of lunar soil taken on the Apollo 11, 12 and 17 missions. The pioneering study also investigated how plants biologically respond to this unusual habitat. Details of the work were featured in the journal Communications Biology.

In the experiment, the basic functions of this type of cultivation were performed. The team planted seeds in lunar soil, added water and nutrients, and exposed the site to light. There was only 12g — provided by NASA — of soil for the tests. Despite this difficulty, the results were positive: almost all the seeds used sprouted. “We were amazed. These results show us that the lunar soil did not interfere with the hormones and signals involved in plant germination”, says Anna-Lisa Paul, one of the authors of the study and a researcher at the University of Florida, in a statement.

Over time, however, the researchers observed differences between plants grown on lunar soil and on Earth (control sample). Some plants in the first group were smaller, grew more slowly or showed variations in their shape. All these physical signs indicate that they were “working” to deal with the chemical and structural composition of the Moon’s soil.

The phenomenon was confirmed when the researchers analyzed the gene expression patterns of these plants. “On the genetic level, they were activating the tools normally used to deal with aggressive elements, such as salt and metals or oxidative stress. This showed us that they perceive the lunar soil environment as a stressful environment”, explains Paul.

The team plans to run tests on the satellite itself. “For future longer space missions, we can use the Moon as a point of assistance for astronauts. It makes sense that we want to use the soil that already exists in the region to grow plants”, says Rob Ferl, also author of the study.

Raju has an exquisite taste. For him, video games are more than entertainment and he likes to discuss forms and art.
Previous Body of Paraguayan prosecutor murdered in Colombia is repatriated | World
Next attention to women in cancer prevention by the SUS must be expanded — Senado Notícias