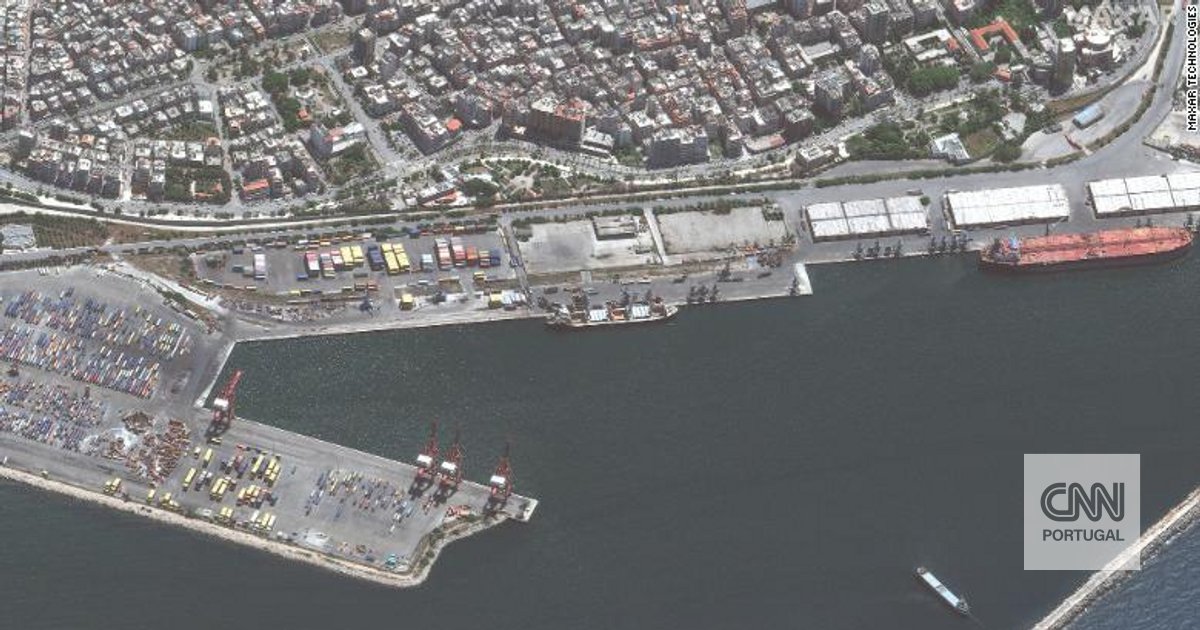 A Russian merchant ship loaded with grain stolen in Ukraine was rejected in at least one Mediterranean port and is now in the Syrian port of Latakia, according to maritime sources and Ukrainian officials.

CNN identified the ship as the freighter Matros Pozynich.

On 27 April, the ship docked off the coast of Crimea and turned off its transmitter. The next day, she was seen in the port of Sevastopol, Crimea’s main port, according to photographs and satellite images.

The Matros Pozynich is one of three ships involved in the trade in stolen grain.

Crimea, annexed by Russia in 2014, produces little wheat due to lack of irrigation. But the northern Ukrainian regions, occupied by Russian forces since early March, produce millions of tonnes of grain every year. Ukrainian authorities say thousands of tonnes are being transported to Crimea.

Kateryna Yaresko, journalist for the publication’s SeaKrime project online Ukraine’s Myrotvorets, told CNN that the project noticed a sharp rise in Sevastopol’s grain exports – to around 100,000 tonnes in March and April.

From Sevastopol, according to satellite imagery and tracking data reviewed by CNN, the Matros Pozynich transited the Bosphorus and headed for the Egyptian port of Alexandria. It was loaded with nearly 30,000 tonnes of (Ukrainian) wheat, according to Ukrainian authorities.

But the Ukrainians were one step ahead. Authorities say that Egypt was warned that grain was being stolen; the load was refused. The Pozynich headed towards the Lebanese capital, Beirut, where it achieved the same result.

Matros Pozynich turned off its transmitter again on May 5, but images from Tankertrackers.com and Maxar Technologies show it traveled to the Syrian port of Latakia.

The Syrian regime has a close relationship with Russia and the Russian military is often in Latakia. In fact, Matros Pozynich is named after a Russian soldier killed in Syria in 2015.

Mikhail Voytenko, editor-in-chief of the Maritime Bulletin, told CNN that the grain could be transferred to another ship in Latakia to camouflage its origin. “When the port of destination starts to change without a serious reason, it’s more proof of smuggling,” he said.

In its first comments on the illicit export of Ukrainian grain, the Defense Ministry’s information office said on Tuesday that “a significant part of the grain stolen from Ukraine is on ships sailing under Russian flag in Mediterranean waters.”

“The most likely destination for the cargo is Syria. Grain can be smuggled from there to other Middle Eastern countries.”he said.

Shipping data shows that the Matros Pozynich is one of three freighters registered under a company called Crane Marine Contractor, based in Astrakhan, Russia. The company is not under international sanctions.

Yaresko says the SeaKrime project identified the true owners of the three ships as one of 29 companies under the umbrella of a large Russian corporation, whose other entities were sanctioned by the United States shortly after the Russian invasion.

Ukraine’s Ministry of Defense estimates that at least 400,000 tons of grain have been stolen and taken from Ukraine since the invasion. Mykola Solsky, Ukraine’s Minister of Agrarian Policy and Food, said this week that they are “sent in an organized manner to Crimea. It’s a big business that is overseen by people of the highest level.”

CNN reported last week that trucks with Crimean plates stole 1,500 tons of grain from storage silos in Kherson. In Zaporizhzhia, trucks bearing the white “Z” symbol of the Russian military were seen transporting grain to Crimea after the city’s main grain silo was completely emptied.

This week, Ukrainian authorities reported more grain thefts by the occupying forces. The Ukrainian information office said that in an area of ​​Zaporizhzhia, stored grain and sunflower seeds were being prepared for transport to Russia. A column of Russian trucks carrying grain left the town of Enerhodar – also in Zaporizhzhia – escorted by Russian military, the cabinet said.

While Russian ships are apparently capable of transporting Ukrainian grain on the high seas, Ukrainian farmers have great difficulties in exporting their products. A large part would depart from Odessa. Although still under Ukrainian control, Odessa has been the target of frequent missile attacks and much of the Black Sea is off limits to merchant ships.

Ukrainian exporters diverted some grain by rail to Romania, as CNN reported last week. But this is hardly a solution to what is becoming a supply crisis that is already affecting world markets.

Samantha Power, administrator of the US Agency for International Development, posted this week on Twitter: “Putin’s war is wreaking havoc on the food supply; Ukraine is the 4th world exporter of maize and the 5th exporter of wheat.”

Typically, Ukraine and Russia supply around 30% of the world’s wheat exports, much of which goes to the world’s poorest countries. Global food prices hit a record in March, according to the United Nations, driven largely by the war in Ukraine. Drought in wheat-growing areas in France and Canada threatens to exacerbate an already complicated supply situation.

President Volodymyr Zelensky said on Tuesday that “without our agricultural exports, dozens of countries in different parts of the world are already on the brink of food shortages.”

On the same day, the President of the European Council, Charles Michel, was in Odessa with the Ukrainian Prime Minister Denys Shymal, observing the huge quantities of grain stored in the port.

He posted photographs on Twitter, saying: “I saw silos full of cereals, wheat and corn ready for export. These much-needed foods are held back because of the Russian war and the blockade of Black Sea ports. The consequences are dramatic for vulnerable countries.”

Trading Economics noted on Wednesday that “wheat prices are 31% higher than before the Russian invasion, as disrupted exports in the Black Sea have significantly reduced world supplies.”

As for the Russians, they seem ready to adapt to the new realities of world markets. The Grains Union of Russia has a conference scheduled for June. One of the sessions, according to the union’s Instagram account, is: “Sanctions restrictions – how the cereal sector is adapting to the new reality and why the state is reacting to a change in the situation at an unprecedented speed.”