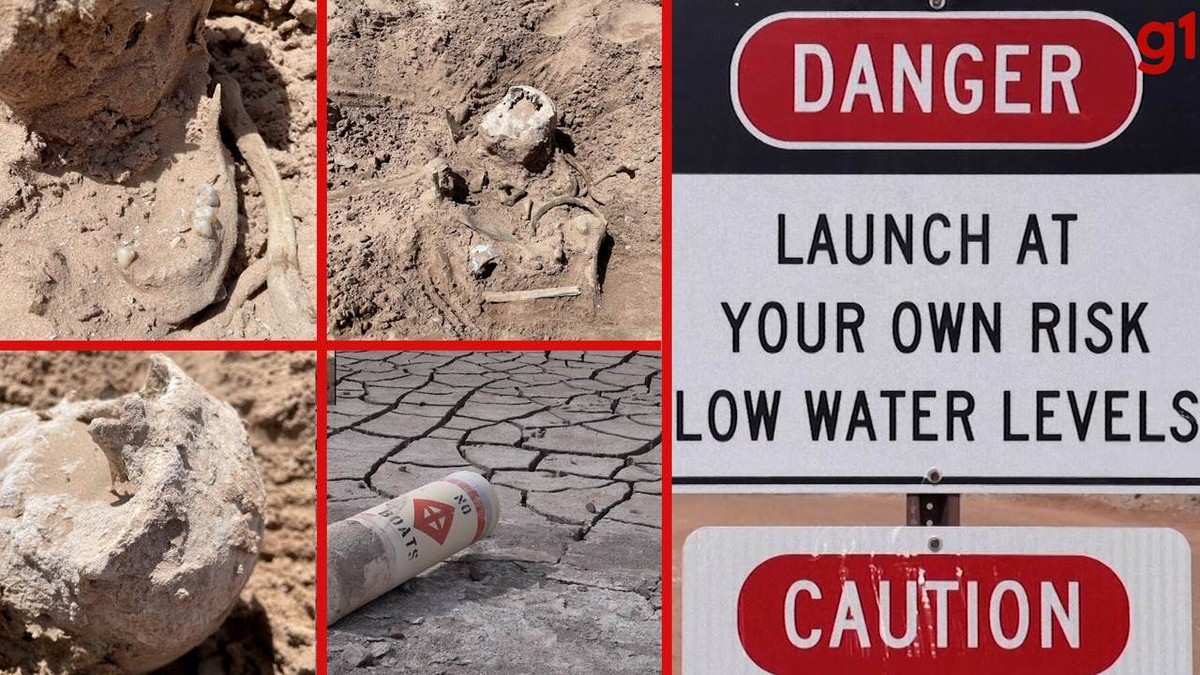 Abhishek Pratap 2 weeks ago News Comments Off on After Severe Drought, Lake Las Vegas Reveals Human Bones and Other Signs of City’s Criminal Past | World 4 Views

Stories about former Las Vegas organized crime figures are surfacing after a second set of unidentified human remains were revealed as drought causes the water level in Lake Mead to drop.

The reservoir on the Colorado River is about a 30-minute drive from the mafia-created Las Vegas Strip.

“There’s no way of knowing what we’re going to find at Lake Mead,” former Las Vegas mayor Oscar Goodman said on Monday. “Not a bad place to dump a body.”

Human remains were found on the ground in a previously flooded area of ​​a lake in Las Vegas — Photo: Lindsey Melvin via AP

Goodman was a defense attorney who represented mob bigwigs, including the ill-fated Anthony “Tony Ant” Spilotro, before serving three terms as the martini-in-hand mayor who appeared in public with a dancer on either side.

He declined to speculate on who might appear in the massive reservoir formed by the Hoover Dam between the states of Nevada and Arizona.

“I’m pretty sure it wasn’t Jimmy Hoffa,” he laughed, referring to the former Labor boss who disappeared in 1975. But he added that many of his former clients seemed interested in “climate control” – Mafia slang for keeping the lake level high and the bodies in their watery graves.

Instead, what’s in the world now is climate change, and as a result the surface of Lake Mead has dropped more than 50 meters since 1983. The lake, which quenches the thirst of 40 million people in cities, farms and tribes of seven states in the Southwest of the USA, is reduced to about 30% of capacity.

“If the lake recedes much further, it’s quite possible we’ll see interesting things emerge,” says Michael Green, a Las Vegas history professor at the University of Nevada, whose father was a blackjack dealer for decades at several casinos, including the well-known Stardust. and Showboat.

“I wouldn’t bet we’re going to find out who killed Bugsy Siegel,” says Green, referring to the notorious gangster who opened the Flamingo Casino in 1946 on what would become the Strip. Siegel was shot to death in 1947 in Beverly Hills, California. His killer was never identified.

“But I would be willing to bet that there will be a few more bodies,” adds Green.

Human remains were found on the ground in a previously flooded area of ​​a lake in Las Vegas — Photo: Lindsey Melvin via AP

Last month, falling water levels exposed the highest drinking water inlet to Las Vegas, which forced the regional water authority to use an inlet in the deep part of the lake, built in 2020, to continue supplying water to casinos, suburbs, 2.4 million inhabitants and 40 million tourists a year.

The following weekend, sailors spotted the decomposed body of a man inside a rusty barrel stuck in the mud of the newly exposed shore.

The body has not yet been identified, but Las Vegas police say he was shot, probably between the mid-1970s and early 1980s, because of the shoes found on him. The death is being investigated as a homicide.

A few days later, a second barrel, not far from the first, was found by a news crew from the KLAS-TV network. It was empty.

On Saturday, two sisters from the Henderson neighborhood, in suburban Las Vegas, were doing stand-up paddleboarding on a lake near an old resort, and noticed bones in a strip of sand that had recently surfaced about 15 km from the barrels.

Lindsey Melvin, who took pictures of the find, said they initially thought it was the skeleton of a wild sheep typical of the region. A closer look revealed a human jaw with teeth. They called the rangers, and the National Park Service issued a statement confirming that the bones were human.

There were no immediate indications of criminal action, Las Vegas police said on Monday, so there is no ongoing investigation. A homicide inquiry would be opened if the Clark County coroner determined the death was suspicious, the police statement said.

Geoff Schumacher, vice president of the Mafia Museum, said he expects “many” of the bodies under the lake’s surface turn out to be drowning victims. But it’s clear to him that the person in the barrel would have been a target.

Sticking a body in a barrel was “a trademark of mob execution,” says Schumacher, whose museum is in a renovated downtown Las Vegas building that was once a post office and federal government office. It opened in 2012 as the National Museum of Organized Crime & Police Forces.

Woman found bones at the bottom of a lake in Las Vegas (Photo: John Locher/AP)

Both he and Green mentioned the death of John “Handsome Johnny” Roselli, a mid-1950s Las Vegas mobster who disappeared in 1976. A few days later, his body was found in a steel drum, floating off the coast of Miami.

David Kohlmeier is a former police officer who became one of the hosts of a podcast and a new Las Vegas TV show called “The Problem Solver Show”, the “Problem Solver Show”. He said Monday that after offering a $5,000 reward to qualified divers who went to look for barrels in the lake, he had been contacted by people in San Diego and Florida who were willing to try.

National Park Service officials, however, said this is not allowed, and that there are hundreds of barrels in the depths, some dating back to the construction of Hoover Dam in the 1930s.

Kohlmeier said he has also been contacted by families of missing persons, and in relation to cases such as a man suspected of killing a mother and brother in 1987, a hotel employee who disappeared in 1992, and a father from Utah who disappeared in the 1980s.

According to Green, the findings made people comment not only on the mafia executions, but also on the possibility of bringing relief and an end to the cycle for grieving families.

“They think we’re going to solve all the mafia murders. In fact, we might see some,” he said. “But it’s also worth remembering that the mob didn’t like the executions to take place in the Las Vegas area, because they didn’t like negative propaganda involving the city’s name.”

No matter what story comes to light regarding the body in the barrel, Goodman predicts it will add to the local folklore of the town that needed the creation of Lake Mead, sprouting in the creosote-covered desert, to become a gambling mecca. with a metropolitan region of approximately 2.25 million people.

“When I was mayor, every time I went to a cornerstone event, I would start to shake, afraid that someone I had known over the years would be found out,” he joked.

Spilotro, a former client of Goodman’s, represented the Chicago mob in Las Vegas in the 1970s. He led a gang nicknamed the “Hole in the Wall” because they drilled through walls to enter homes and businesses. Spilotro’s body and that of his brother Michael Spilotro were found in June 1986 by a farmer while plowing a cornfield in northwest Indiana.

Tony Formiga served as the model for the character Nicky Santoro, played by actor Joe Pesci, in Martin Scorcese’s 1995 film “Cassino”. Goodman played himself in the film.

“We have a very interesting track record,” he told the Associated Press. “It certainly adds to the Las Vegas mystique.”