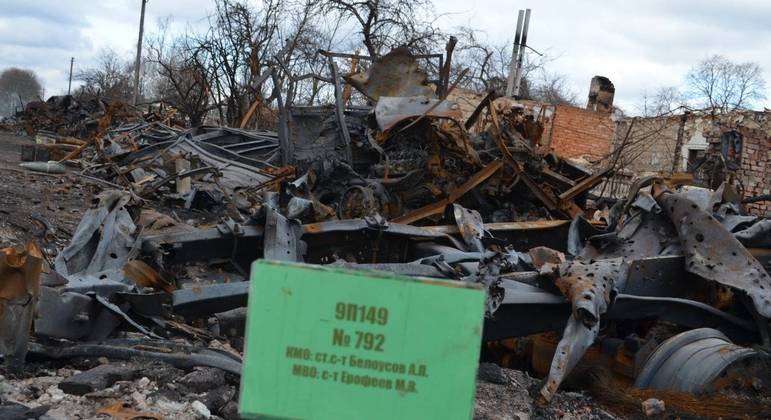 Ukrainian authorities expressed confidence in defeating Russian troops later this year, who face stiff resistance in the eastern areas of the country, where they are currently focusing their offensive.

The Ukrainian Defense Ministry recorded 30 bombings in 24 hours in the Lugansk area and said the situation was difficult along the entire front line in Donetsk.


The Ukrainian General Staff said it had prevented 10 attacks against the two regions in the last 24 hours.

The victory “will not be easy, but it will happen” before the end of the year, declared Kirilo Budanov, head of Ukrainian military intelligence.

Russian troops have been trying for three weeks to cross the strategic Siverskyi Donets River, which flows north of the village of Bilogorika, near Severodonetsk.

In the village, almost deserted, several buildings are still on fire, the roads are littered with abandoned military material and shots are heard in the vicinity.

Moscow bombed a local school on May 7 and killed 60 civilians, according to Kiev, which considers the attack one of the worst crimes committed by the Russian army since the start of the February 24 invasion of Ukraine.

But Russian victories are limited to the city of Kherson and the almost total conquest of Mariupol (southeast), on the Sea of ​​Azov.

At the end of March, Moscow gave up on taking Kiev and began to concentrate activities in southern and eastern Ukraine, where it occupies large swaths of territory, but few centers of importance.

In the northeast region, Ukrainian troops say they are reclaiming space in the vicinity of Kharkiv, the country’s second largest city.

“The progressive liberation of the Kharkiv region demonstrates that we will not leave anyone in the enemy’s hands,” declared Ukrainian President Volodmyr Zelensky.

Kiev claims it has launched a “counter-offensive” in the Izum region (southeast of Kharkiv), a crucial point from which “the enemy is withdrawing”.

“Our Armed Forces are pushing the enemy back and people are starting to return to their homes,” said Oleg Sinegubov, governor of the province.

“The turning point will take place in the second half of August. Most military operations will be over by the end of the year,” stated Kirilo Budanov.

After the war, “we are going to restore Ukrainian power in all the territories we have lost, including Donbass and Crimea,” he said in an interview with British channel Sky News.

The situation is more complex in Mariupol, where nearly a thousand fighters are resisting in the underground tunnels of the Azovstal steelworks.


Tensions at the borders

The European Union (EU) on Friday announced a new 500 million euro ($520 million) military aid package for Kiev, bringing total aid since the start of the conflict to 2 billion euros.

The bloc’s 27 countries, however, failed to reach an agreement to cut imports of Russian oil. Hungary, in particular, asked for more guarantees due to its high dependence on oil from Russia.

The energy issue was also discussed during a three-day meeting of foreign ministers from the G7, a group of the seven richest countries on the planet (Germany, Canada, the United States, France, Italy, Japan and the United Kingdom).

In a statement, the G7 expressed a desire to “accelerate efforts to end dependence on Russian energy”.

The group also aims to “extend economic sanctions” against Moscow to “sectors on which Russia is particularly dependent” and has urged China’s government “not to undermine” the punitive measures.

The G7 also said it would “never recognize” the borders that Russia wants to forcefully impose on Ukraine and urged Belarus to “stop facilitating Russian intervention”.

On Sunday, Finland, a hitherto neutral country, must formalize its candidacy for NATO membership.

Russia has suspended electricity exports to Finland, a country with which it shares a 1,300-kilometer border. The Finnish branch of the Russian state-owned company that operates in the sector announced that the measure was motivated by non-payment.

Putin said on Saturday that the “end of the traditional policy of military neutrality would be a mistake, as there is no threat to the security of Finland”.