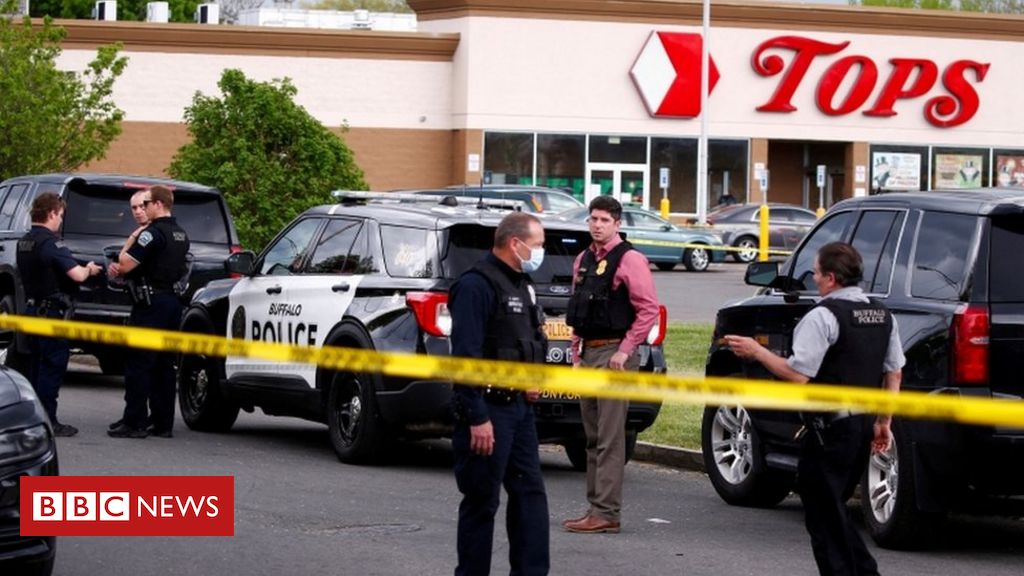 What is known about the shooting that left at least 10 dead in NY State, USA

Abhishek Pratap 1 day ago News Comments Off on What is known about the shooting that left at least 10 dead in NY State, USA 7 Views

An 18-year-old white man shot and killed 10 people in a black neighborhood in New York State in what authorities consider to be a racially motivated hate crime.

The man, identified as Payton Gendron, was arrested at the scene — a supermarket in the city of Buffalo.

The suspect entered the store on Saturday afternoon (5/14) before opening fire. He live-streamed the attack on social media.

US President Joe Biden condemned what he called an “abominable” act.

“We are investigating this incident as a hate crime and a case of racially motivated violent extremism,” said Stephen Belongia of the FBI’s Buffalo office, adding that there was evidence of “racial animosity.”

US broadcaster CBS reported that the attacker shouted racial slurs as he opened fire. He also apparently posted a manifesto online that included racist language and ideas.

The suspect is believed to have driven about 320 km to reach the predominantly black area of ​​the city. Thirteen people were shot in total and most of the victims were black, said Buffalo Police Commissioner Joseph Gramaglia.

“He got out of his vehicle. He was heavily armed. He had tactical gear. He had a tactical helmet. He had a camera that was broadcasting live what he was doing,” Gramaglia told reporters.

According to the police commissioner, the suspect surrendered his weapon and was arrested. He later appeared in court charged with first-degree murder.

The three injured victims — who worked at the supermarket — did not suffer serious injuries.

A retired police officer who worked as a security guard tried to shoot the suspect but was eventually killed, police said.

“This is the worst nightmare any community can face and we are suffering,” Buffalo Mayor Byron Brown told reporters.

“We cannot let this hateful person divide our community or our country,” he added.

Grady Lewis, who witnessed the attack from across the street, told local media he saw the man open fire. “I saw the guy come in, military style, bent over, just shooting people,” he said.

Shonnell Harris, who was working at the store during the attack, told the local Buffalo News that he heard more than 70 gunshots as he ran to escape the building through a back door.

“The store was full. It was the weekend,” she said. “It was a nightmare.”

Describing the aftermath of the attack, a police officer told the Buffalo News: “It’s like stepping into a horror movie, but everything is real. It’s like Armageddon.”

On Saturday afternoon, New York Governor Kathy Hochul said the suspect was a “white supremacist who engaged in an act of terrorism”.

This was “a military-style execution targeting people who simply wanted to buy groceries at a neighborhood store,” she said while visiting Buffalo.

In a statement, US President Joe Biden said he and the First Lady were praying for the victims and their families.

“A racially motivated hate crime is abhorrent to the very fabric of this nation,” he said. “We must do everything in our power to end domestic terrorism fueled by hate.”

Hate crimes in the US hit a 12-year high in 2020, with more than 10,000 people reporting offenses related to their race, gender, sexuality, religion or disability. That year, crimes against Asian Americans and blacks in particular increased, FBI figures indicate.

But because the police are not required to submit hate crime data to the FBI, those numbers may be underestimates.

Saturday’s shooting in Buffalo is the worst incident of its kind so far in the US this year, and it will also further inflame the already heated political battle over US gun control.

About 40,000 deaths a year involve firearms in the United States, a number that includes suicides.