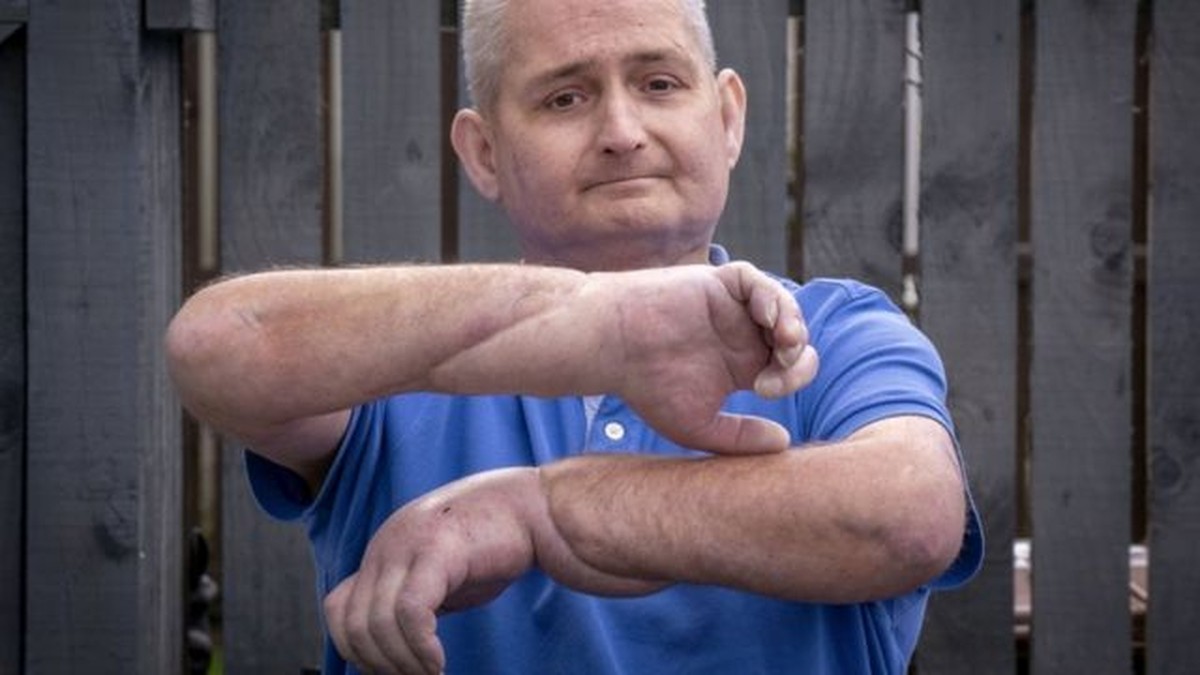 Scotsman Steven Gallagher laughed when he was first suggested to have a double hand transplant.

But five months after a pioneering and risky surgery, he is now pain-free and feeling “a new life”. The 48-year-old developed an unusual rash on his cheeks and nose 13 years ago, as well as pain in his right arm.

Doctors initially thought it was lupus and later carpal tunnel syndrome. Steve, who is a father of three, had surgery based on this diagnosis.

When the pain returned in both arms, he was referred to a specialist who eventually diagnosed him with scleroderma, an autoimmune disease that causes scarring of the skin and internal organs.

The condition affected areas such as the nose, mouth and hands. About seven years ago, her fingers started to curl. He was in “horrible” pain.

“My hands started clenching, it got to the point where they were basically two fists, my hands became unusable,” he recalled. “I couldn’t do anything but lift things with both hands. I couldn’t pick up anything, it was a struggle to get dressed and stuff like that,” says Steven, who was forced to quit his construction job.

He was referred to Professor Andrew Hart, a plastic and hand surgeon in Glasgow, Scotland, who raised the possibility of a double hand transplant.

“At the time I laughed and thought ‘this is kind of a space age thing,'” he said.

Steven was able to carry his dog again after the transplant – Photo: PA MEDIA/BBC

The two doctors detailed the risks involved in the surgery.

“They were really upfront and very open about what could happen, that I could lose my hands completely,” Steven recalled. “They said it was unlikely, but it was a risk. My wife and I talked about it and agreed (about the operation). I could end up losing my hands anyway, so we decided to let them know we were up for (the surgery).”

Steven had to undergo a psychological evaluation to ensure he was prepared for the transplant.

‘These hands are amazing’

Steven is believed to be the first person in the world with his condition to undergo this surgery. The operation lasted 12 hours, involved a team of 30 professionals from various specialties and was carried out in Leeds, England, in December, after a suitable donor was found.

“After the operation, I woke up and it was quite surreal,” Steven said.

“These hands are amazing, everything happened so fast. By the time I woke up from the operation, I was able to move them.”

After spending four weeks in Leeds following the operation, Steven now makes regular visits to hospitals in Glasgow for physical therapy and monitoring.

Although he still can’t perform specific tasks, like closing buttons on clothes, he can already do several other things, like petting his dog, turning on the faucet and filling a glass of water.

“I gained a new life,” he added. “I’m still finding things difficult now, but things are getting better every week with the physical therapist and the occupational therapists. Pain was the big problem. Before the operation it was horrible, I was taking so much painkiller it was unbelievable, but now it’s not. I feel no more pain.”

Kay says the operation was a “great team effort” and that a hand transplant is “very different from a kidney or other organ transplant.”

“Hands are something we see every day and we use them in many ways,” he explained. “For that reason, we and our expert clinical psychologists assess and prepare patients to make sure they are able to psychologically cope with the permanent memory of their transplant and the risk of the body rejecting the transplanted hands.”

For Steven, the operation was transformative. He now hopes to return to work once he has recovered.

She's our PC girl, so anything is up to her. She is also responsible for the videos of Play Crazy Game, as well as giving a leg in the news.
Previous Brazil records 143 deaths from Covid-19 in the last 24 hours
Next Monkeypox: What we know (and don’t know) about monkeypox