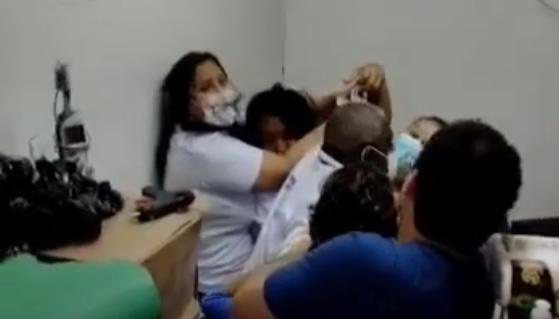 Nurse is brutally attacked during vaccination against Covid-19 in Salvador

A nurse at the Manoel Vitório Basic Health Unit, in the Brotas neighborhood, in Salvador, was attacked this Saturday (11) during work hours. Maíra Porto, 42, was attacked by the mother of two boys who were at the health post for immunization against Covid-19, but the vaccination card of one of them showed inconsistency in the registration of the previous dose.

According to witnesses, the confusion lasted about 10 minutes. Colleagues of the server needed to intervene so that the aggressor let go of the professional’s hair. The name of the children’s mother was not revealed, but the aggression was registered at the Civil Police’s Flagrantes Central.

The spirits were heightened when the nursing technician found an inconsistency in the vaccination cards of one of the children. Salvador, registered the Pfizer application on the same date. The problem is that this second card also lacked information such as the name of the health unit where the supposed dose had been administered, as well as the name of the responsible professional.

Two police officers shot during confrontation on the sidewalk

Faced with the incompatibility of the information, the nurse accessed the municipality’s information registration system, in which all the citizen’s movements related to health care are recorded. At that moment, it was found on the platform that no dose of immunization against covid-19 had been applied to the child. In these cases, the service protocol at the stations guides the server to activate a support area.

Maíra then took the photographic record of the cards and asked the mother to wait. While waiting for the events to unfold, a woman who accompanied the mother and children in the unit, introduced herself as a doctor and suggested to the nurse that she ignore the information described on both cards, and administer a dose of the immunizer as if it were the first dose. The women’s intention was for the child to be vaccinated with the Pfizer vaccine. The discussion started at that moment when the nurse refused to proceed incorrectly.

In the unit’s management room, Maíra was pulled by her hair, in addition to other aggressions while her mother tried to remove the vaccination cards that, by that time, were already in the manager’s hands. After the attacks, the women went to the police station.

The director of the Salvador City Servants Union (Sindseps), Lília Cordeiro, said that the report made by the mother and aunt, in the Occurrence Bulletin, does not match the reality experienced in the health unit.

“We now have the police report, with photos of the two cards. There is the testimony of the nurse, the manager. The nurse was taken from the police station to take the forensic examination. We are following up with our colleague and we will take the appropriate measures”, highlights Lília.

The director also states that situations of violence against professionals have been frequent. “There are colleagues who have already been slapped on the back, death threats, cars advancing on people in drives, there are many situations of aggression in health units”, she says.

In a note, the Civil Police’s Flagrant Center said it had registered a Detailed Term of Occurrence (TCO) for contempt against an employee of a health center, located in the Brotas neighborhood, on Saturday (11). This document will be forwarded to the Special Criminal Court.

The Municipal Health Department (SMS) regretted the aggression through a note, classifying the attitude ‘unjustified’, and said that the folder is helping to stabilize the server.

The Municipal Health Department deeply regrets and repudiates the verbal and physical aggression suffered by the UBS nurse Manoel Vitorino during the exercise of her activity this Saturday (11). Such an attitude is unjustified, especially when it comes to a professional who is dedicated to taking care of others. It is worth noting that contempt of a public official in the exercise of the function or on account of it is a crime provided for in article 331 of the Penal Code, with detention from six months to two years, or a fine.

A police report was registered at the Central de Flagrantes, on Avenida ACM; as well as the management provided all assistance to stabilize the servers.

follow him BNews on Google News and get the top news of the day first hand!

She's our PC girl, so anything is up to her. She is also responsible for the videos of Play Crazy Game, as well as giving a leg in the news.
Previous Diablo IV will be released for PS4 and PS5 in 2023
Next iPhone 7 loses support for iOS 16; see models that do not receive an update – Link

Wesley Safadão will need to temporarily leave the stage due to a herniated disc. The …