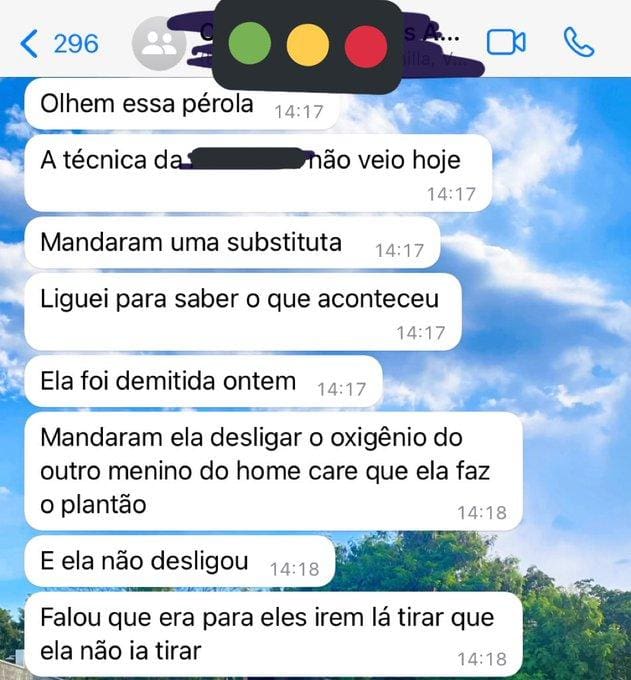 Possible cut by health plan goes viral on the web: ‘They ordered to turn off oxygen’

Jenni Smith 3 weeks ago Health Comments Off on Possible cut by health plan goes viral on the web: ‘They ordered to turn off oxygen’ 9 Views

Last Wednesday (8), the Superior Court of Justice (STJ) decided that health plan operators cannot be forced to cover procedures not included in the list of the National Supplementary Health Agency (ANS), a fact that caused despair. to family members of people with disabilities, rare or autoimmune diseases who use injunctions to guarantee access to assistance via health insurance. In recent days, the subject has been gaining attention on social media.

This Saturday (11), a health activist’s tweet on the subject went viral, receiving around 30,000 likes. In it, the founder of Instituto Lagarta Vira Pupa, Andréa Werner, reports that she received information that a nursing technician had been fired after refusing to turn off the oxygen used by a child.

“They ordered her to turn off the oxygen of the other boy in the home care she is on duty. And she didn’t turn it off”, said the mother of a child with a rare disease, whose identity was preserved.

The injunction that guaranteed this assistance to the boy would have fallen – after the decision of the STJ, there was an avalanche of actions in court to overturn the injunctions that guaranteed services not included in the ANS list for benefiting people with specific needs, for having rare diseases or require more expensive treatments. See the post:

A friend has a daughter with rare syndrome who has home care through the health plan. Behold, today she sends this to us in the group. The nursing technician who took care of her daughter was fired because she didn’t want to turn off the oxygen of a boy whose injunction fell. That’s it. pic.twitter.com/pJQxLTJglz

Earlier this Sunday night, the O TEMPO report managed to talk to the mother who shared the story with Andréa Werner. She agreed to report the story, as long as her identity was preserved, so as not to harm the career of the nursing technician who refused to turn off the oxygen.

The woman said she talked to the technician to understand what had happened. The boy in question undergoes oxygen therapy, that is, he receives daily doses of oxygen to improve breathing and avoid excessive fatigue, which can compromise some organ, such as the heart, for example. “He wouldn’t die from running out of oxygen, but his health will be greatly impaired,” she explained.

The source also said she is the mother of a disabled woman who needs home care and more than ten medications a day. The service is guaranteed by injunction and she fears losing assistance at any time. “Even with a fine, the operator is not complying with what is in the injunction. Now, I am waiting for the day when the nursing technicians will not come,” she said.

The Brazilian Association of Health Plans (Abramge) says that it has guided the 143 companies represented by it to evaluate the cases before going to court, to ensure the health of policyholders.

In the circular released by the entity on Friday (10), Abramge stated that “it advises all its associated operators to pay attention to treatments already in progress guaranteed by judicial measures and to carefully and cautiously assess each of the situations. It is important to understand on a case-by-case basis and to discuss with the beneficiary and his/her attending physician the best option, including the maintenance of the treatment or the search for therapeutic alternatives”.

‘Necessity and relevance of treatment’

The STJ considered that the Judiciary may determine that the plan guarantees the beneficiary the coverage of a procedure not foreseen by the agency, but that this depends on technical criteria and demonstration of the need and relevance of the treatment. Entities that represent supplementary health users argue that the result of this could be a legal confrontation between companies in the sector and families of patients with rare diseases, especially those who still do not have a specific treatment defined.

“It is of utmost importance to emphasize that the Citizen Constitution of 1988 is governed by the Principle of No Social Retrogression. Therefore, the State cannot go back, it cannot fail to comply with what it has done, it cannot put itself in the debtor situation again. there is how the State, represented by the Citizen’s Court, at this moment, goes back in decades of pacified understanding by the Exemplifying Role”, says an excerpt from a public note signed by several entities that represent people with disabilities, rare or autoimmune diseases.

For the National Association of Benefit Administrators (Anab), it is necessary to guarantee the financial health of the operators, avoiding issues that involve patients who seek more expensive medicines than those available on the ANS list.

“With the favorable decision for the tax role, according to the understanding reported by Minister Luiz Felipe Salomão, the beneficiary earns more. This is because it will be possible for beneficiaries to be guaranteed minimum assistance coverage for any and all types of health plans,” said Anab’s president, Alessandro Acayaba de Toledo, in a press release.

The assistance promoted by supplementary health mobilizes left and right parliamentarians in Brasília. So far, 51 federal deputies from 11 parties have already presented at least 18 bills to change the ANS’s tax role rule.

The report tried to contact other advisors from entities that represent health plans in Brazil and awaits a response. The space is open to demonstrations.

She's our PC girl, so anything is up to her. She is also responsible for the videos of Play Crazy Game, as well as giving a leg in the news.
Previous 3rd and 4th doses: see who can get vaccinated against covid in Salvador this Monday
Next Malnutrition causes 20% of cancer deaths; what care to take? – 06/12/2022