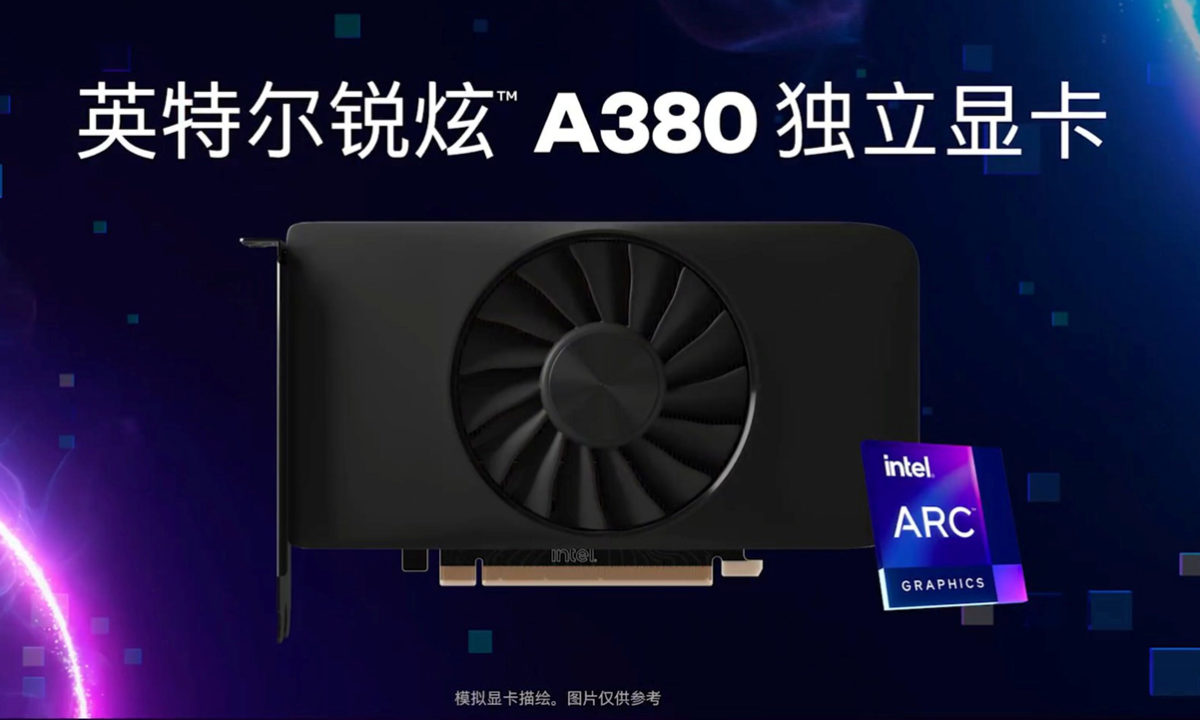 After much anticipation, the Intel it’s back to the video cards segment. The company that in recent years has focused its efforts on graphics chips integrated into the processor, returns to the dedicated card market. The model that marks this new phase is the Arc A380.

In the 90’s Intel first stepped into the video card market, with the i740, released in 1998. At a time when the Intel name was flying low. More than 80% of personal computers were equipped with an Intel processor at this time. It was precisely in this decade that the company launched one of the best-known slogans in history: Intel Inside.

At that time NVIDIA was already in the market, but there were other competitors that disappeared, the 3DFX, Matrox and even the ATIpurchased by OMG. The performance of the i740 did not please and the card ended up selling well below what Intel intended.

2022 is the restart for the company in the failed attempt of 1998. The Arc A380 is based on the Xe HPG architecture and has 8 Xe cores (equivalent to 1024 FP32 cores) and 4 MB of L2 cache. There are 6 GB of 16 GHz GDDR6 memory, 96-bit interface and 192 GB/s bandwidth, 2 GHz base clock and 75W TDP. Intel also highlights the support for Ray Tracing technology, thanks to its 8 dedicated cores. The GPU, the graphics chip, which equipped the board is the ACM-G11, produced by TSMC in 6nm lithography.

As is clear from the specs, it’s an entry-level card, but this is just Intel’s first step towards its Xe HPG architecture. Intel will gradually map out an entire lineup for fights in the most varied market segments.

The Arc A380 comes to be an option for those who are looking for a card to run games in Full HD, delivering 60 fps on an average graphics configuration. Arc A380 is 25% faster than Radeon RX6400, according to Intel data.

The Intel Arc A380 card supports hardware-accelerated AV1 video encoding, as well as HEVC and H.264 encoding and decoding, in addition to DirectX 12 Ultimate support. Through the Intel Xe Display Engine, the GPU can handle up to 4 monitors with HDR resolution and 4K at 120Hz, dual displays at 8K at 60Hz and up to 360Hz at 1080p and 1440p.

Similar to what AMD does with Smart Access Memory, Intel also comes with technology that promises performance, thanks to improved interconnection when the GPU is combined with an Intel Core processor. The technology was called Deep Link.

As with NVIDIA and AMD, Intel will have its partners, regarding the distribution of this card. Acer, Asus, Gigabyte, GUNNIR, HP and MSI are the partners mentioned by Intel. Even MSI has already announced a gaming PC equipped with the Arc A380.

In Intel’s publicity photos, it is possible to observe that the reference project has only one fan, but, obviously, as is customary in the video card market, the partners in the distribution of the card put customized models on the market, as is the case of GUNNIR, which showed yours Arc A380 Photon 6GB OC, with two fans.

Raju has an exquisite taste. For him, video games are more than entertainment and he likes to discuss forms and art.
Previous Eight points that made the Google engineer believe that the company’s AI had life – Link
Next Food to control possible cardiovascular damage