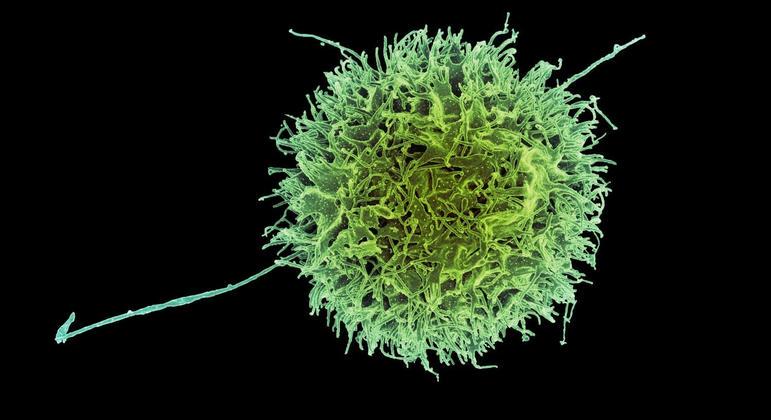 New research has identified more than a thousand genes related to the development of severe infection by Covid-19 and which especially affect the function of a certain type of white blood cell.

This is the main conclusion of a study published in the journal Cell Systemsin which scientists from the universities of Sheffield (UK) and Stanford (United States) used, among other resources, artificial intelligence tools.

Johnathan Cooper-Knock, from the department of neuroscience at the University of Sheffield and co-author of the study, says in a statement that, during the investigation, scientists found that these thousand genes “represent three-quarters of the genetic drivers of severe Covid-19”.

“This is significant for understanding why some people had more severe symptoms than others,” emphasizes the researcher.

The team used several large datasets to unravel the genetics behind the severity of Covid-19.

The first dataset contained genetic information from healthy human lung tissue, and the data helped identify gene expression in 19 lung cell types, including the epithelial cells that line the airways and are the first defense against infections.

Other data came from one of the largest genetic studies of critically ill coronavirus patients.

They looked for genetic clues — DNA mutations — that might indicate whether someone was at increased risk of severe Covid, and looked at whether some mutations appeared more or less frequently in patients with severe disease.

But genetic mutations alone can be difficult to interpret, so the team used other data that describe which regions of the genome are important for different cell types in lung tissue.

The researchers were able to determine which genes were faulty and in which cell types.

According to Cooper-Knock, NK cells, which humans are born with, and which constitute the body’s first line of defense against infections, are known for their ability to destroy viruses and cancer cells.

“They are like generals at war in that they mobilize other immune cells, telling them where to go and what to do. We found that in people with severe coronavirus infection, the critical genes of NK cells are less expressed, so there is a less robust immune response. The cell isn’t doing what it’s supposed to do.”

For his part, Stanford’s Michael Snyder says the findings lay the groundwork for a genetic test that can predict who is most at risk for severe Covid.

“Let’s imagine there are 1,000 severe Covid-related DNA changes. If you have 585 of those changes, that makes you very susceptible, and you want to take all the necessary precautions.”

It is not the first study to link NK to severe Covid. Drugs have already been proposed to reactivate these cells in some cancers, and trials are underway for severe cases of Covid.

Raju has an exquisite taste. For him, video games are more than entertainment and he likes to discuss forms and art.
Previous Hubble Telescope detects a black hole in the Milky Way for the first time
Next BA.2 can cause Covid reinfection within 20 days