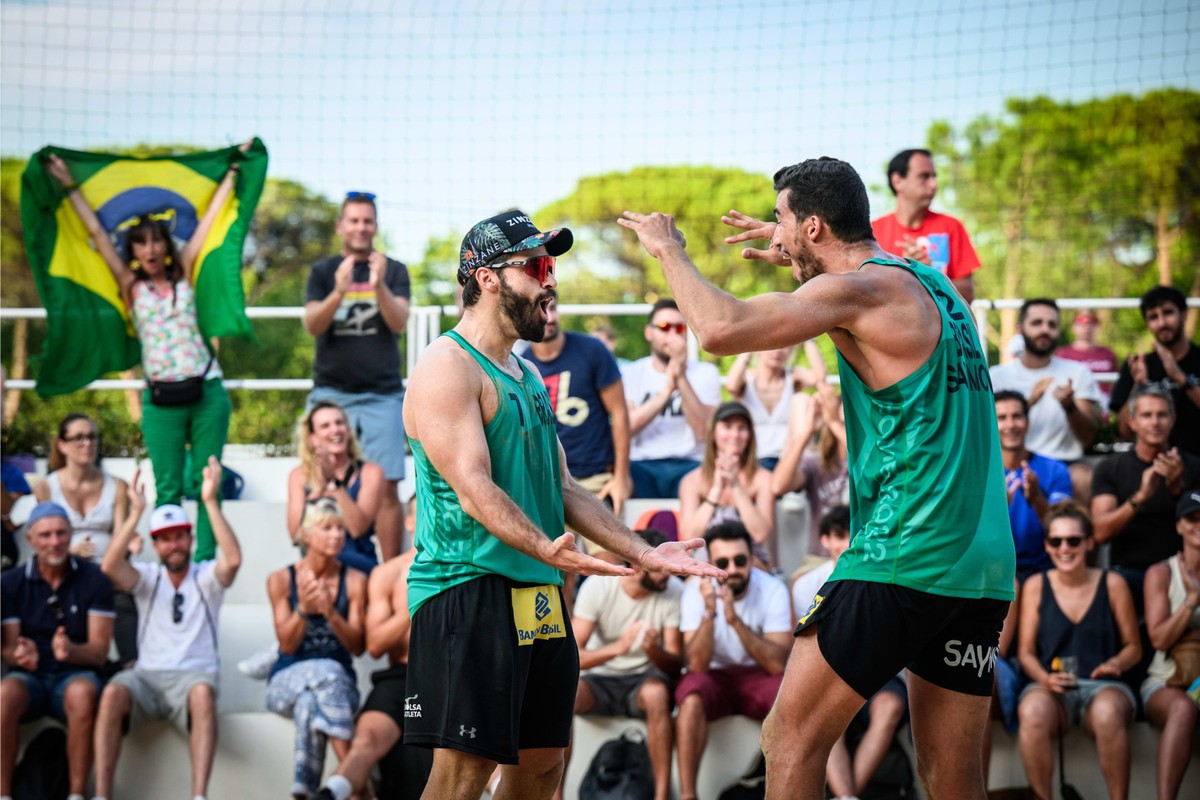 It was an almost perfect day for Brazil at the Beach Volleyball World Cup being played in Rome. Because of the clash between two women’s doubles, the country could continue with just six doubles in the tournament after Thursday’s round of 16. Five achieved this feat. In the men’s, Brazil continues with all its teams in the competition. Four of the eight doubles in the quarterfinals are Brazilian.

Bruno and Saymon win in the round of 16 of the World Cup in Rome – Photo: FIVB

André and George beat Australians Nicolaidis and Carracher and will face Bruno Schmidt and Saymon, who beat Cherif and Ahmed, from Qatar, this Friday at 8 am. With that, Brazil is already guaranteed a double in the semifinals. Alison and Guto, who beat their cousins ​​Grimalt, from Chile, face Mol/Sorum, from Norway, at 2 pm. Renato and Vitor Felipe, who made a spectacular comeback against Nicolai and Cottafava, from Italy, take on Nõlvak and Tiisaar, from Slovenia, at 16h.

In the female category, Duda and Ana Patrícia are the only remaining national representatives. They beat Carol Solberg and Bárbara and face Sarah Pavan and Melissa Paredes, on Wednesdays, starting at 6 am. The Canadians were responsible for eliminating Talita and Rebecca, this Thursday, in the round of 16.

The World Cup is broadcast on SporTV channels and is the most important tournament for the sport after the Tokyo 2020 Olympic Games.

With some ease, Duda and Ana Patrícia won the Brazilian confrontation against Carol Solberg and Bárbara by two sets to zero, partial of 21/16 and 21/17. It is the fifth match between the pairs and the fifth victory of the youngest team, which dominated the score for practically the entire time.

With the qualification for the quarters in their pockets, Duda and Ana were waiting for the next result to know if they would make another green and yellow duel against Talita and Rebecca or if they would face the Canadians Sarah Pavan and Melissa Paredes. It was a very balanced duel. The Brazilians won the first set by 21/16. The rivals returned in the second by 21/11. In the tiebreaker set, Talita and Rebecca had the ball to close the match, but they missed in the decisive hour and ended up defeated by 18/16.

Duda and Ana will have the mission to overthrow the current world champions, who became “destroyers of Brazil” in the tournament. In addition to Talita and Rebecca, they eliminated Taiana/Hegeile in the previous phase.

Brazil started off on the right foot in this Thursday’s disputes. André and George faced the Australians Nicolaidis and Carracher who have a faster style of play, looking to surprise. But they adapted well and won with ease, securing their first national spot in the quarterfinals. The victory was by two sets to zero, with a double 21×15.

André and George beat Australians in the round of 16 of the World Cup in Rome – Photo: FIVB

The second men’s game of the day was much more exciting. Bruno Schmidt and Saymon faced off against Qatari athletes Cherif and Ahmed. They won the bronze medal at the Tokyo Olympics and are one of the top duos on the circuit. But the Brazilians played an extremely safe game in the turn of the ball and managed to win by two to zero, with a double 21×19.

Alison and Guto were the third male duo to secure a spot in the quarterfinals. Against the Grimalt cousins, from Chile, the Brazilian duo suffered in the first set and only managed to win the partial in the 24 to 22, after a turn in the final stretch of the partial. In the second set, with Guto sweeping the court, the pair closed at 21 to 17.

In the last game, the biggest emotion of the day. Vitor Felipe and Renato faced Nicolai and Cottafava and got off to a bad start. The Italians made it 21 to 11 in the first set and looked confident to win the game. But the Brazilian duo put their heads together, won the second round by 21-19 and even turned the tie-break by winning 15-13.

Brazilians clash in the quarterfinals